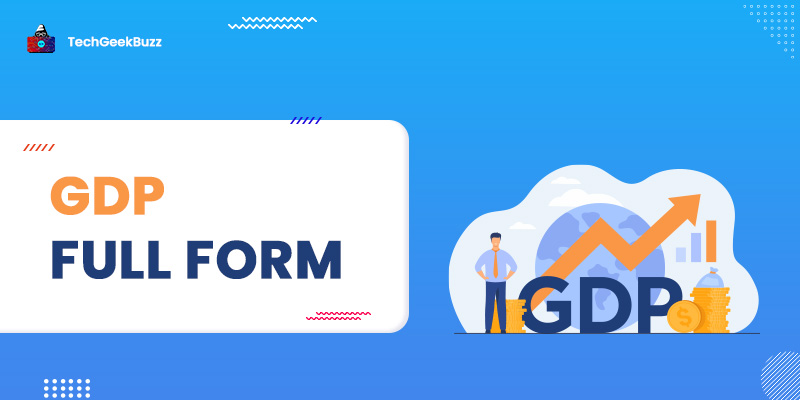 What is GDP? (GDP Full Form)

The total aggregate of the market value of all the goods, products, and services produced within a specific duration of time in a country is called GDP.

GDP stands for Gross Domestic Product, and it allows us to estimate the size of the economy and the overall economic health of a country, which covers both growth and decline in the economy of a nation. GDP altogether specifies the living standard of the people of a specific country. i.e. as the GDP increases, the living standard of the people of that country increases. A good country for living purposes is one with preferably high GDP. Three categories contributing most to the GDP of India are namely industry, service sector, and agriculture, including allied services.

GDP was introduced as a tool to defend landlords against unfair taxation between the Dutch and the English between 1652 and 1674. The concept was introduced by William Petty, which was later refined and developed by Charles Davenant. In the year 1934, the first modern version of GDP came into existence when it was refined by Simon Kuznets. Moreover, in the year 1944, right after the Bretton Wood conference, it became a well-established tool to map the economy of a country.

How to Calculate GDP?

There are several approaches to calculating GDP. However, the most common approach is to sum the total consumption, gross investment, and government spending plus the value of exports, minus imports. GDP = COE + GOS + GMI + TP & M ? SP & M OR GDP = private consumption + gross investment + government spending + (exports ? imports)  Some of the different approaches to calculating GDP are as follows:

The full form of GDP is Gross Domestic Product, and it is a tool or a figure that assesses the overall economic condition of a country. Also, while there are several ways to calculate the GDP of a nation, the method discussed above is the one that is the most popular.

We hope that the above-mentioned information helps you in the best possible way!