What is C# Used For? Real-World Applications 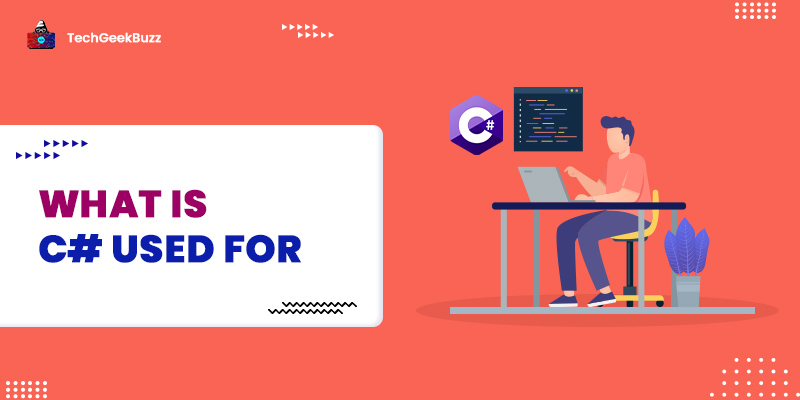 Like other programming languages , JavaScript and Python, there has been a surge in the use of C# in the web development industry. This is due to the fact that the language's fundamental properties enable developers to produce applications with the powerful functions that the dynamic web platform demands.

Not only does C# is used in web development but also for developing desktop-based applications, games, and more. To know more about what C# is used for, continue reading this article.

Here, we shall help you know the real-world applications of C#. Before that, let us understand what C# is, why it is so popular, and its features.

As discussed above, C# is one of the most popular, versatile, and robust programming languages. Basically, it is the language of the .NET framework . It is a development platform composed of a variety of tools, programming languages, and libraries that support the creation of different applications.

In 2002, C# became an international standard as approved by Ecma (ECMA-334) and ISO/IEC (ISO/IEC 23270) in 2003. Initially, Microsoft introduced C# with the .NET framework and Visual Studio. Both these products were closed-source at the time. However, after four years, the company introduced a free and open-source project called Mono. It is a cross-platform compiler and runtime environment for C#.

The latest and the most stable version of the language is C# 10.0. It is popularly used in developing a wide range of applications. Also, it is one of the languages for Common Language Infrastructure (CLI).

Furthermore, the language is more syntactically analogous to the family of C-style languages, i.e., C, C++, and Java, because it was developed with the aim of bringing the best features of Java and C++ together. So, if you are familiar with C, C++, or Java languages, you will find learning C# easy.

Check Out: Features of C#

Why is C# Popular?

According to the TIOBE Index for September 2022, C# ranks fifth on the list of popular programming languages.

Backed by Microsoft and being one of the core languages of the .NET framework, these are the two primary reasons for the popularity of C#. In the matter of choosing a programming language for developing desktop and mobile applications to web applications and games, C# has been the first choice of many developers.

Along with the above two reasons for the popularity of C#, there are many others. Here we are going to list a few of them:

It is a high-level language that has syntax more similar to C, C++, and Java. Those who are familiar with these C-style languages can easily and quickly learn C#. In addition, the language comes with a lot of built-in functions that are simple to use. In short, the language has a shallow learning curve.

Since there is such a big global community of knowledgeable professionals using C#, the language can always benefit from new tools. Not only the community works on making the language better but also on helping those who encounter problems while working with it. Nonetheless, the language has support from a leading tech giant, Microsoft, where you can get expert help, additional resources, and regular updates.

Like C and C++, C# is a statically-typed and strongly-typed language. So, these features of C# help you create reliable products that you can change and tweak anytime. Also, developers may rapidly modify any C# software to increase functionality and serve more users by building on top of it.

Why Should You Learn C#?

Here are some reasons to consider why you should learn C#:

Because so many Microsoft products and technologies are dependent on C#, businesses that use these products often are looking for a qualified individual who is proficient in C#. This proves that C# is one of the most in-demand skills these days.

There are no signs of slowing the development of indie games and the creation of web applications and web services using ASP.NET. This indicates that learning C# opens up a plethora of career opportunities in the web as well as in the game industry. Not only this, but also C# supports mobile app development. So, you can even shape your career in the mobile development industry with C#.

Along with job opportunities, you will receive a good amount of package after learning and mastering C#. According to glassdoor , the average salary of a C# developer with the .NET skill is $79K per annum, whereas it is INR 5.5 lakhs per year in India.

What is C# Used For? - Real-World Applications

Here are some real-world applications of C#:

After the language became cross-platform compatible, it evolved into a popular choice for back-end web development for the Linux platform. Also, the language is well-known for creating fast and reliable web services that can run on any cloud platform.

Initially, C# was only compatible with the Windows platform. Though the language became cross-platform, it is still well-known for developing robust and reliable desktop applications for Windows. Some common Windows desktop applications developed in C# include Microsoft Visual Studio, KeyPass, and Paint.NET.

C# is also very popular in the game development industry. Unity , a well-known game engine and cross-platform IDE, leverages C# for creating games. This game engine is popular among novice developers as it is easy to use and learn. It provides a lot of built-in features that make games operable. This means that it supports 3D rendering, collision detection, and many other gaming aspects.

Not only can you use Unity for developing games but also for virtual reality ( VR ) development platforms, like Oculus Rift and Samsung Gear. Without C#, you cannot create games with this engine.

This marks the end of our exploration of the real-world applications of C#. It is a versatile language that allows you to develop web apps, web services, Windows desktop apps, games, enterprise applications, and mobile applications. Along with other popular languages, C# has made its place in the development industry quickly. So, learning C# will definitely expose you to a variety of job options.

We hope this article has provided you with meaningful insights into the applications of C#.

Yes, you can be a self-taught C# developer like many other working developers are. You just need the right resources to learn the language. Simply, you can opt for an online C# course to have proper guidance and learn the concepts in order. Besides, you can even refer to the best C# books available in the market to gain fundamentals.

Yes, C# has a low learning curve. However, if you already know C, C++, or Java, you will find learning C# even easier as its syntax is analogous to C-style languages.

Yes, it is worth learning C# in 2022 because it is among the top five programming languages according to the TIOBE index. Not only is C# among the top languages this year, but also in the past few years. In addition, it holds the fifth position for the last two yeast on GitHub Language Rankings.