What is C++ used for? Top 20 Real-World Applications 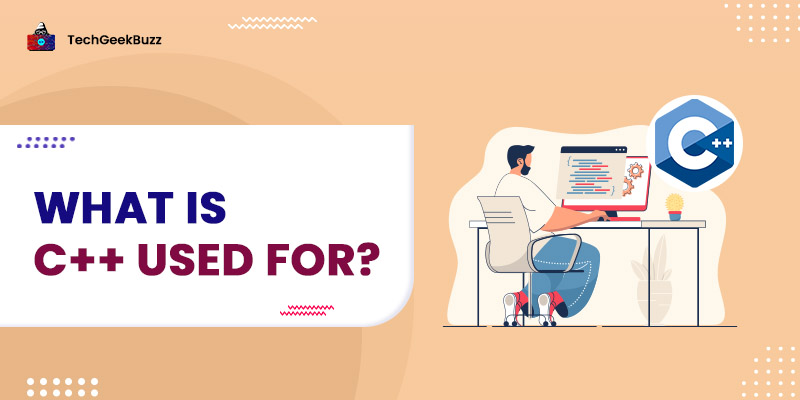 Developed by Bjarne Stroustrup at Bell Laboratories as an extension to the C language, C++ first appeared in 1979. We refer to C++ as C with classes because C++ is centered around objects and classes rather than functions and logic. As C++ belongs to the C family, it has nearly the same syntax as C.

Developers have complete control over memory and system resources because of C++'s versatility. Additionally, it enables them to polish their source code so that it can execute in any environment despite having less hardware space. So, we can state that it is an ideal language to create applications that are fast, efficiently manage system resources, and perform critical tasks.

These are the reasons for C++ still being in use, even though many modern-day languages are available. Besides, it is employed in building various sorts of applications in today’s modern world.

Wondering what is C++ used for? No worries! We have got you covered.

Here in this article, we shall make you familiar with different real-world applications of C++. Before diving deep into the topic, let us have an overview of C++ features and reasons to learn C++.

So, let us get started with our discussion!

Along with being object-oriented, C++ has numerous other features that make it a more popular programming language. The following are the salient features of C++:

The codebase of many modern-day systems, such as operating systems, IoT devices, web browsers, software applications, and many others, have C++ code, at least in some of its parts. In addition, the speed of C++ makes it ideal for developing performance-critical applications. Such involvement of C++ in contemporary applications makes it a popular choice among developers.

More interestingly, C++ stands at the fourth position in the list of top programming languages, according to the TIOBE Index July 2022 .

The immense popularity of C++ is one reason many students opt to learn the language. Some other major reasons include:

If you aspire to learn C++ from scratch, you can start your learning here .

What is C++ Used For? Top 20 Real-World Applications

Let us now move on to some of the top real-world applications of C++.

An operating system is simply a computer program that offers various services to other programs running on the same system. It also manages the hardware and software resources of the system.

You might be very well aware of Microsoft Windows and macOS operating systems. The codebase of Apple OS X consists mostly of C++. Meanwhile, Windows 95, 98, and XP have the essence of C++. Besides, C++ forms the basis for many Microsoft applications, such as Microsoft Office, Visual Studio IDE, and Internet Explorer.

The speed and strongly-typed features of this language make it a perfect choice for developing operating systems. Apart from this, C++’s low-level capability helps professionals develop fast and efficient operating systems to manage resources.

Many popular games, including StarCraft, Counter-Strike, and World of Warcraft, are developed in C++. Not only games but also popular game engines, like Unreal engine, and gaming consoles, like Xbox, Nintendo Switch, and PlayStation, C++ is the language behind the development of all.

As gaming entails various resource-intensive functions, such as creating multiplayer sessions and producing graphics, C++ is an ideal language for developing games as it assists programmers in optimizing resource usage. The language can manipulate the system resources as it is close to the hardware.

A GUI application is a software program developed leveraging graphical features, such as menus, dialog boxes, windows, buttons, and many other components, so that end-users find it easy to interact with the application.

Various applications of Adobe Systems, including Photoshop and Illustrator, have leveraged C++ for their development. Microsoft used C++ to build a popular GUI application, WinAmp Media Player, which has been satisfying all our audio and video requirements since its inception.

C++ is an excellent language for creating database management systems. MySQL and PostgreSQL are among the popular databases developed using C++. Both are relational databases and let users store and manage structured data.

The most common application of C++ in web browsers is for the rendering purpose. Using C++, it is possible to develop robust back-end services that can fetch data from databases and render code into web pages.

The rendering engines need to be faster because people do not like visiting web pages that require a lot of loading time. As C++ provides fast performance, many modern browsers, including Google Chrome, Firefox, Safari, and Opera, have rendering engineering developed in C++.

Internet of Things (IoT) devices refer to physical devices, such as sensors, computer devices, appliances, and gadgets, that connect and exchange data over a network. Some popular examples of IoT devices are cars, refrigerators, smartwatches, TVs, and other appliances.

These devices have hardware embedded inside them. As a result, they operate with strict power requirements and limited computing resources. As C++ code can run in less hardware space and manage resources efficiently, companies widely use it to develop IoT devices.

As C++ is a language close to machines or hardware, C++ is used in creating compilers.

An embedded system is a computer system that combines a processor, memory, and input/output peripheral devices and has a specific function to carry out.

As C++ is a mid-level language, it lies somewhere between the hardware and software of systems. It lets you access and control the system hardware directly without losing the capabilities of high-level languages. So, C++ is a perfect language for creating embedded systems, such as smartwatches, digital cameras, MP3 players, and many others.

The term library in computer science is a collection of pre-written programs, files, subroutines, classes, and other non-volatile resources developed to accomplish a specific purpose. Whenever you need to accomplish a certain task, you can import the corresponding library into your source code without writing the code for that task from scratch.

As libraries need to be fast and high-performance, C++ is the primary language for developing various libraries. An example of a popular library whose backend is developed in C++ is TensorFlow, which is a machine learning library.

AR is an acronym for Augmented Reality, while VR is the short form for Virtual Reality . The two technologies act as a bridge between the virtual and real worlds. C++ is used to develop various AR and VR applications. These applications need to manage and process large volumes of data generated through camera sensors and user interactions. C++ assists in processing the data while providing the best visual experiences.

More interestingly, most AR and VR applications operate on the Unreal engine, which is developed leveraging C++.

A cloud system or a cloud computing technology refers to delivering computing services, including servers, storage, databases, networking, analytics, and software, over the internet as per the end user’s demands. On the flip side, a distributed system is a collection of several components spread across different machines that work well together to appear as a single system to end-users.

As both these types of systems work close to the hardware, C++ serves as an ideal language for developing and implementing those systems. Also, these systems develop concurrent applications to balance the load for which they require the multithreading feature that C++ offers.

Bloomberg is a distributed relational database management system developed in C, but C++ powers its libraries and the development environment.

C++ has also paved its path in scientific research. At the European Organization for Nuclear Research ( CERN ), scientists analyze data on subatomic particles leveraging C++ that can answer a lot of questions related to the origin of this universe. Additionally, NASA has been utilizing C++ to create autonomous driving systems that aid Mars Rovers in navigating new and unknown territories.

The most popular search engine, Google, also leverages C++ to provide search results to end-users quickly with the minimum response time. This search engine utilizes machine learning algorithms powered by C++ to provide the relevant and best possible search results. In addition, another reason Google leverages C++ is to implement its crawling and indexing infrastructure.

Maya 3D, a C++-developed software program, is one of the best applications for virtual reality, 3D graphics and environments, and animation.

C++ has not even left the aerospace industry. It is used to develop software that powers both military and commercial aircraft, including the F-16 and F-35 fighter jets. Also, this industry leverages C++ to create safety-critical software applications by following the strict coding guideline to ensure that all crucial components of the plane work as expected.

Movie production requires high-quality graphics and special effects. This is possible to create using C++. Because it can handle huge files with high-quality videos and conduct many of the complex calculations that enable the special effects, C++ is ideal for this job.

C++ has a great influence on the healthcare industry. From lab testing equipment to software applications for managing patients’ data, everything is powered by C++. In bioinformatics research, C++ plays a crucial role in modeling data and running data simulations. This is because C++ is used to design numerous algorithms for medical and biological sciences.

Here ends the list of the top real-world applications of C++. After reading this, we can relate to the fact of C++ being a general-purpose and versatile language. Everywhere you go, whether it is the healthcare sector, baking sector, telecommunications, or aerospace, you can find C++; hence, it is a popular language. With a wide range of applications in a variety of industry verticals, C++ opens up a lot of employment opportunities.

We hope you now have enough clarity on the applications of C++ after going through this article.

C++ is an extension of the C language. So, if you are familiar with the C language, you will find C++ easy and simple to understand and code. Even if you directly start learning C++, it will be easier.

While C does not make use of objects and classes, C++ entirely revolves around classes and objects.

The internet is replete with a plethora of free online blogs, tutorials, and videos to learn C++ fundamentals. After learning fundamentals, you can move on to take a course or pursue certification to have a better grasp of the language and work with some interesting projects.

Yes, it is definitely worth learning C++ in 2022 as it stands at the fourth position in the list of top programming languages as per the TIOBE Index July 2022. As it is one of the oldest programming languages, you can find enormous career opportunities after mastering the language. 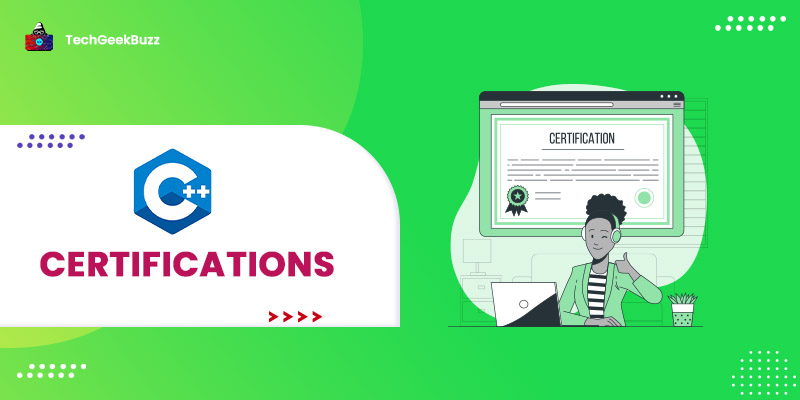 Top 10 C++ Certifications and Courses You Should Opt For 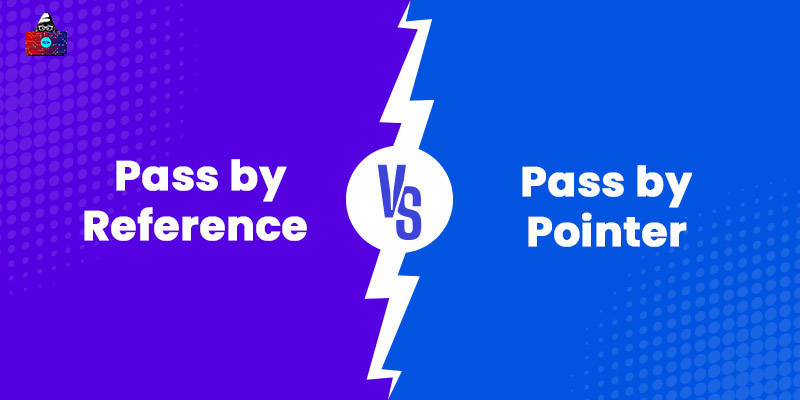 Pass by Reference vs Pass by Pointer in C++ 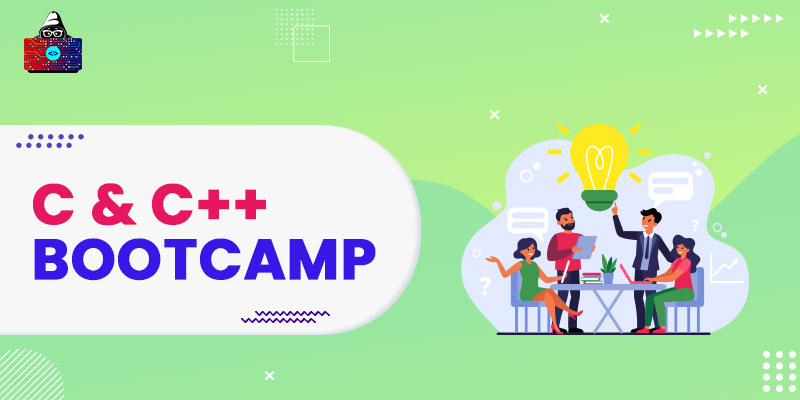 C and C++ are the most basic programming languages and are a base for many other languages. Both la…