Difference Between SQL and MySQL 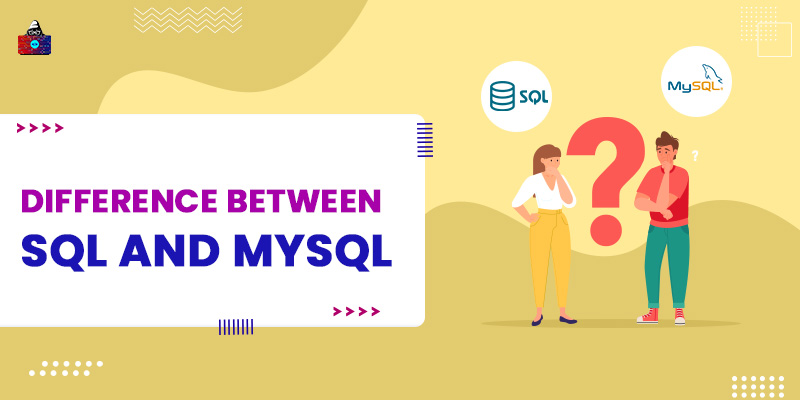 Handling and maintaining massive datasets would be a heck of a task if it were not for database tools. These database technologies make it simple and keep everything organized. Every set of applications, whether it is a native software or web application, depends on a database for the dynamic approach of content management. Databases play a vital role in every organization since they act as a central place for storing all the essential information. A database is a well-managed collection of digital data. Also, it is easy to access, update, and manipulate the data stored in a database. A database management system (DBMS) is responsible for managing databases. It is software that acts as an interface between end-users or other applications and databases. It enables users to insert, retrieve, update, delete, and manage data stored in a database. A relational database is a type of database that organizes data in the form of rows and columns, i.e., tables. Also, MySQL is one of the most popular relational database management systems out there. But how to access and manipulate data stored in relational databases? Well, this is where SQL comes into play. SQL, Structured Query Language, is a domain-specific language used for managing data stored in relational database management systems (RDBMS). In general, SQL makes it possible to manage structured data. If you are new to the concept of databases and are not aware of MySQL and SQL, you have landed at the right place. This article aims to introduce you to MySQL and SQL and all the key differences between them. Also, we will help you learn the features, advantages, and disadvantages of SQL as well as MySQL. So, let us get started!

MySQL is an open-source relational database management system (RDBMS) by Oracle Corporation. It is free software available under the GNU General Public License and many other proprietary licenses. It is compatible with all major platforms, including Windows, macOS, Linux, Solaris, and FreeBSD. The name of this relational database management system is the combination of ‘My’, the daughter’s name of co-founder Michael Widenius, and ‘SQL’, a structured query language. MySQL is one of the four components of the LAMP web application software stack. LAMP stands for Linux, Apache, MySQL, and Perl/PHP/Python. Many renowned data-driven websites, like WordPress, Joomla, Drupal, and phpBB, and popular websites, like Facebook, YouTube, Flickr, and Twitter, use MySQL database management system.

Here are some of the significant features of MySQL:

With Open Database Connectivity, we can address MySQL using programming languages, such as Delphi and Visual basic.

MySQL version 8.0 provides support for dual passwords, where one password is primary, and the other is secondary. Therefore, users can make changes to their credentials hassle-free.

MySQL Workbench is a visual database design tool for the MySQL database system that brings SQL development, database design, and administration under one roof.

Advantages and Disadvantages of MySQL

Let us discuss the advantages and disadvantages of MySQL.

SQL stands for structured Query Language. It is a domain-specific language designed for managing data stored in relational database management systems (RDBMS) and follows a declarative paradigm. In addition, it is also used for stream processing in relational data stream management systems (RDSMS). This domain-specific language offers two advantages over older read-write APIs, such as ISAM and VSAM. The first is SQL has made it possible to access multiple records with a single SQL command. The second advantage is that it has eliminated the need to specify how to reach a particular record. Donald D. Chamberlin and Raymond F. Boyce designed SQL based on relational tuple calculus and relational algebra. It consists of many types of statements, which would informally be referred to as sublanguages, such as a Data Definition Language (DCL), Data Manipulation Language (DML), Data Control Language (DCL), and Data Query Language (DQL). SQL was one of the first query languages to use the relational model of E.F. Codd. In 1986, SQL became a standard of the American National Standards Institute (ANSI), and in the following year, it became the standard of the International Organization for Standardization (ISO).

After learning about the relational model from E.F. Codd, Donald D. Chamberlin, and Raymond F. Boyce first developed SQL at IBM in the early 1970s. Initially, they named this relational database language as SQUARE (Specifying Queries in A Relational Environment). But this language was difficult to use because of its subscript/superscript notation. In 1973, Chamberlain and Boyce started working on SQUARE to design its sequel called SEQUEL. SEQUEL stands for Structured English Query Language. They designed it especially for manipulating and retrieving data stored in IBM’s original quasi relational database management system, called System R. Finally, they renamed SEQUEL as SQL (Structured Query Language).

The following are the salient features of SQL:

Data Definition Language (DDL) is a language for creating and modifying the structure of database objects, such as tables, indices, and users. DDL commands are CREATE, DROP, ALTER, TRUNCATE, and RENAME.

Data Manipulation Language (DML) is a language for adding, deleting, and modifying data stored in a database. DML commands are SELECT, INSERT, DELETE, UPDATE, and MERGE.

Embedded SQL is a method of combining the data manipulation capabilities of SQL and the computing power of a programming language. In other words, we can embed SQL queries into high-level languages, such as Python, C++, and Java.

Advantages and Disadvantages of SQL

Here are some upsides and downsides of SQL:

SQL vs MySQL: A Head-to-Head Comparison

The following table draws the key differences between MySQL and SQL:

Which One to Choose – MySQL or SQL?

The primary and the most significant difference between SQL and MySQL is that SQL is a structured query language, whereas MySQL is a relational database management system. Also, all relational database management systems use SQL as their standard query language. Therefore, it would be inappropriate to choose one between MySQL or SQL because MySQL uses SQL as a query language. Moreover, it is impossible to retrieve and manage data stored in the MySQL databases without SQL.

With this, we have reached the end of our SQL vs MySQL article. If you are into learning SQL, then you have to use an RDBMS to learn the necessary SQL commands . It does not matter which RDBMS software you use; the SQL syntax and commands are pretty much similar. In programming languages, you do not download a programming language. Instead, you download a tool that can execute that programming script. Similarly, we cannot download the SQL language. Instead, we install a tool like MySQL to execute SQL commands. We hope you like this article, and you get to know something new. If you have any suggestions related to this article, please let us know by commenting down below. People are also reading:

difference between sql and mysql mysql sql sql vs mysql