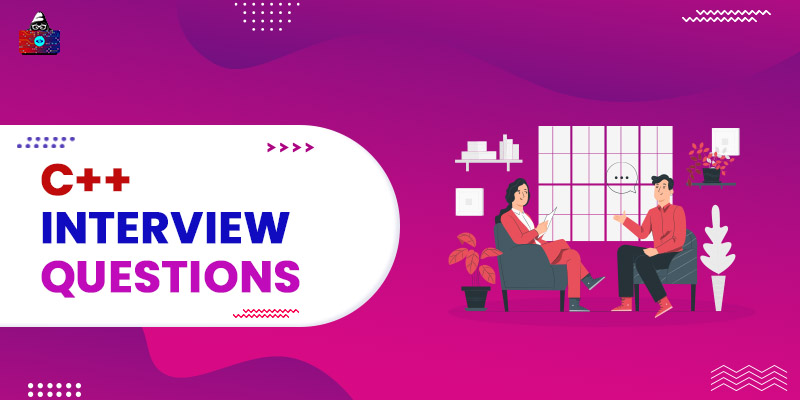 If you Google for C++ jobs, you will find many job openings with decent salaries. Here, we will explain some of the most frequently asked C++ interview questions that will help you to clear an interview and land a job in C++ development. Even if you're not looking for a job in C++, you can go through these interview questions to build a better understanding of the popular programming language.

So, let's get started!

Answer: C++ was first introduced in 1979 at Bell Labs. It got its name because it was designed as an extension of the C programming language. Thus, we can say that C++ is the enhanced version of C having OOPs concepts. The ++ sign in C++ signifies extending C.

Answer: C++ is a high-level programming language. It was created back in 1979 by Bjarne Stroustrup and released in 1985. C++ is mainly used for developing desktop applications and software.

Answer: In C++, pointers are variables that hold the memory addresses of other variables.

Answer: A class is a user-defined datatype, which occupies zero memory until its object isn't created.

9. How many modifiers does the class have?

Answer: A class in C++ can have one of the three modifiers, namely private, public, and protected.

Answer: Inheritance is a concept of OOPs by virtue of which a derived class can inherit the properties and method of its base class.

Answer: Polymorphism is defined as the property of C++ classes for having the same method offer different functionality when calling different types of objects.

14. Give some advantages of OOPS.

15. Give some disadvantages of OOPS.

16. What is the default function call method in C++?

Answer: A function calling itself is known as recursion.

18. Define the call by value method.

19. Define the call by reference method.

Answer: Modularity is the ability to partition a program into individual components.

21. What is function overloading?

Answer: When more than one function definition is declared with the same function name but different attributes, it is known as function overloading. For example:

Answer: A member function of the class having the same name as the class that is automatically called when the object of that class is created is known as a constructor.

23. What is a parameterized constructor?

Answer: The malloc() function is a memory management function. It provides a dynamic memory location to a variable during the run time.

25. Give an example of the copy constructor.

26. What is the header file of the function abs()?

27. What do you know about encapsulation in C++?

Answer: Encapsulation is one of the properties of object-oriented programming, and it is used to wrap up the various data elements and methods (functions) in a single unit called a class. The main objective of encapsulation is to prevent direct access to the variables of a class. This is how encapsulation is achieved in C++:

28. What do you know about data abstraction in C++?

Answer: Data abstraction can only be achieved via data encapsulation. In data abstraction, we try to hide the internal working of methods and only provide essential access to the user.

Let's take a real-world example of a car. In a car, we have brakes, accelerator, steering wheel, gearbox, and so on that can be directly accessed by the driver. Here the driver does not need to mull over the internal working of all the car elements like the engine and gear mechanism. Still, she can use all the car features. To achieve data abstraction in C++, we use classes and header files.

Answer: Storage classes are the special keywords in C++ as the prefix to C++ data type . These storage classes can define the lifetime, initial value, and visibility of the variable throughout the program. In C++, we have five storage classes:

30. What do you know about the friend class and friend function?

Answer: The concept of a friend in C++ challenges the data encapsulation and abstraction properties of OOPs.

Friend Function: The concept of the friend function is similar to the friend class, but here, instead of giving complete access over private members to a class, we grant it to some specific functions.

31. List the major points we need to care about when we define a friend function or class.

Answer: Whenever we define a friend function or class, we need to take care of the following things:

In function overriding, we define the method of the parent class in the child class. It can be achieved at the runtime, which means at runtime, the compiler decides which method to execute.

Answer: The following table enumerates the various differences between Java and C++ :

Answer: The following table highlights the differences between C and C++:

36. Explain how virtual functions are related to runtime polymorphism.

37. Mention some differences between C++ structure and class.

Answer: C++ structure and class can be used to perform some similar tasks, but they have the following differences:

38. What do you know about the static keyword?

Answer: It is a special keyword that could be used with variables, functions, objects of a class, and methods of a class. It allocates lifetime memory storage to the specified data object.

41. What would be the output of this code?

In this statement, the value of a first gets used and then assigned to b , and then modified. It results in b storing 0 and increment in a by 1.

43. What do you know about abstract classes in C++?

44. Explain the reference variable in C++.

Answer: No, we can not perform destructor overloading in C++ classes because destructor methods neither accept any argument nor they return any value. Therefore, there is no possibility of overloading destructors in C++.

47. Explain the concept of the namespace in C++.

Answer: The concept of namespace was introduced in C++, and it was missing in C. Namespace is generally used to resolve the conflict of two variables having similar names. With the help of namespace, we can declare various identifiers or variables with the same name for different values and different scopes and access them according to our needs.

Answer: Tokens can be defined as names or the smallest units of a program that provide a piece of meaningful information to the compiler. Here is a list of C++ elements that are tokens:

50. What will be the output of this code?

51. Write a C++ function "sum" that calculates the sum of two numbers without using the + operator.

It covers important topics, such as arrays, structures, and dynamic and static binding, that are missing in some popular programming languages. However, with time, C++ has become obsolete, but still, many companies use it to build applications and operating systems. High performance and closeness to the system hardware are the two main assets of C++, which are still helping it to stand tall among other popular programming languages that offer much more than C++.

That's the end of this blog post on best C++ interview questions. During the interview, apart from your conceptual knowledge, your coding skills may also be tested. The interviewer may also ask you to write a specific program to solve a problem, so there you need to write code as soon as possible without committing any silly mistakes.

We also recommend you develop a strong understanding of data structure and algorithms before you appear for any programming interview because these signify the problem-solving capability of the candidate.

Wish you all the luck!

Like these C++ interview questions? Or have any suggestions for us? Please let us know by commenting below.

Learn all the concepts of C++, such as data types, variables, object-oriented, file handling, etc. Keep practicing to understand those concepts better and develop mastery of them. Before appearing for an interview, make sure to go through the above list of C++ interview questions to revise all major concepts.

A C++ developer is in charge of writing and analyzing computer programs written in C++, developing a variety of applications in C++, maintaining and optimizing existing C++ applications, and spotting bottlenecks in applications and fixing them immediately.

C++ developers should be proficient in C++ programming and object-oriented programming, have knowledge of the latest C++ standards, acquaintance with templating in C++, familiarity with popular libraries, knowledge of embedded system designs, and interpersonal skills, such as management, communication, and willingness to learn.

The median salary of entry-level C++ developers in India is INR 7.8 lakhs per year, while it is $95K per annum in the United States, according to glassdoor.