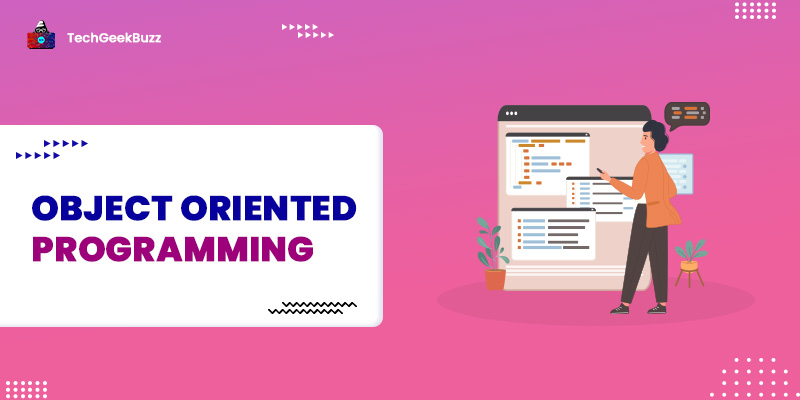 Here in this article, we have provided an answer to What object-oriented programming is and how class & objects are related to it. We have also discussed the major properties of OOPS that a programming language should follow to be an Object-Oriented Programming Language.

What Is Object-Oriented Programming? [Definition]

An Object-Oriented Programming language is an approach to solving real-world problems using the concept of objects. In Object-Orientation programming, we can create an Object which can hold data and functions (attributes and methods), so the operations of the functions can only be applied to that specific data.

Now, every High-Level programming language supports OOPS because it provides some concepts which are often used to solve real-world problems.

The concept of OOPS is also known for its properties, which include topics like:

Advantages and Disadvantages of OOPS

How are classes and Objects related to OOPS?

Before we tell you how class and object are used along with OOPS, let’s have a look at the definition of each one.

A class is a blueprint that contains all the instructions related to an object, a class has no existence in the program until its object gets created. The class also determines all the properties of an object. No matter how many objects of a class get created, all of them will have the same properties.

When we want to bring the class into existence, we create an object of that class, we can say that an object is the soul of the class, and there could be more than one object of a class. With the help of an object, we can access all the instructions of the class.

Class and Objects are an important part of OOPS because, with the help of these two concepts, we implement all the other properties of OOPS in a programming language, from Polymorphism to Encapsulation. We can implement everything using classes and objects.

With Encapsulation, we deal with wrapping the data and methods under a single unit or entity, and class is the perfect example of implementing the concept of Encapsulation. With encapsulation, our approach is to bind the data and its properties using a single entity so the code cannot be manipulated by any outer factor.

Encapsulation also promotes the concept of data hiding if there are two classes. One class cannot use the data of another class until the developer itself allow the accessibility explicitly.

Abstraction can be defined as the extension of the Encapsulation property. In Abstraction, we deal with the hiding of important information and detail from the user. For example, when we create a program , to access its functionality, we provide some buttons so the user can access the functionality of the program without knowing the real code behind it.

In abstraction, we try to hide the irrelevant details from the user, so the user only communicates with the program output rather than the program working.

Polymorphism is a Greek word that means “many shapes”, and as its name suggests, polymorphism deal with the multiple shape or nature of an object. In OOPS, polymorphism helps to differentiate between two objects having the same nature or structure.

Inheritance is the most important property of OOPS; it is a property that brings the concept of code reusability to Object-Oriented programming languages. Using the concept of inheritance, one class can inherit another class's public and protected properties.

Using the concept of inheritance, you can use any module written by another developer, so you do not need to write the complete code from scratch. There are various types of Inheritance, such as:

If you like this article or have any suggestions related to Object-Oriented programming, please let us know by commenting down below. Your feedback will be a valuable asset to us.

OOP stands for Object-Oriented Programming. It is a programming paradigm that revolves around objects and classes. It lets you break a large program into manageable and bite-sized problems so that you can solve them easily.

There are four basic concepts of OOPs, namely Abstraction, Inheritance, Polymorphism, and Encapsulation.

The term polymorphism refers to multiple forms. In OOP, polymorphism is a concept that lets you access different types of objects through the same interface.

Alan Kay is considered the father of OOP.