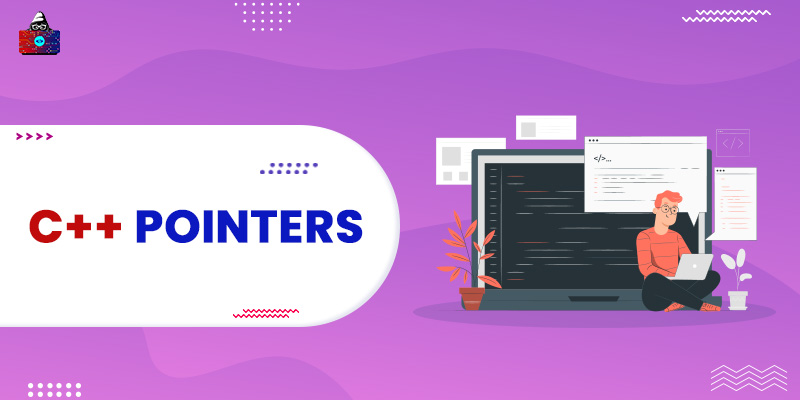 Pointer in C++ is one of the most confusing and important topics and it plays a vital role in dynamic memory allocation, for a beginner understanding the concept of pointer could be a daunting task, here we have tried to break the concept for you in simple words, so you could have a basic idea what are pointers in C++ and why do we use them.

Before jumping to pointers let’s discuss the ampersand (&) sign, and you must have encountered this special character in C++ operators where we have used 2 ampersand signs to represent the AND logic operator. But here the & represent memory address, we all know data get stored in memory and we use variable name or Identifies to refer the data value, but when the compiler compiles the program it store data at random free memory location and each memory location has a memory address and to get that memory address we use the single ampersand sign ( & ). NOTE && = AND LOGIC Operator & = Ampersand Operator to tell the memory address of the object. Example

A pointer is a variable that is used to store the address of another variable, in simple words a pointer variable store memory address as a value. Like other variables we also have to define the data type and name of the pointer along with the asterisk(*) character as a prefix. Syntax to define a pointer

The data type of the pointer variable should be similar to the variable data type which addresses it is supposed to store. Examples

How to use a pointer variable?

Often Array gets confused with pointers because of both deals with address and values. We all known to access the element from an array we use its index value and to access the value of another variable we use the asterisk (*) sign before the pointer variable. The concept of both array and pointer is similar.

Behind the Scene Here you can see that the value of arr is similar to &arr[0], which means arr works as a pointer variable that holds the address of the array base and the index value act as an asterisk sign which helps to access the value which is stored at that address.