Array vs Pointer String: Difference You Should Know 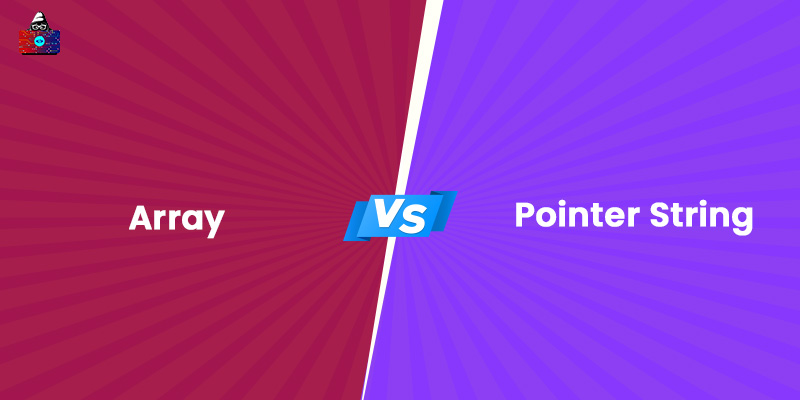 In programming languages such as C, C++, and Java, we use the pointer variable to store the address of some other variable. The pointer variable we create usually is of the same data type as that of the variable it points to. In C and C++, there is no built-in data type called string, so we basically use an array that holds the characters in a sequence to form a string.

Here in this article, we have provided a simple explanation of how a string is related to arrays and pointers and how the two are different from each other. But before discussing that, let’s have a brief overview of an array and a pointer.

An array is a collection of elements of a common data type, and it stores all its elements sequentially in the memory. The array uses indexing (starting from 0 to n-1, where n is the total number of elements in the array) to access the stored elements. All the elements stored in the array have the same variable name but have a different index number.

To access a specific element from an array, we use the index number associated with it. In both Java and C++, we have the concept of an array. However, there is a noticeable difference; in Java, arrays are dynamically allocated, whereas in C++, they are statically allocated.

Behind the code: In the above example, we defined an array x of integer type that can hold 10 elements.

A string is a collection of characters in a sequential manner. The definition of a string sound similar to an array because to make a string, we require the array data structure. The array has a property to bind all its elements in sequential order, and that’s why we use an array to hold a sequence of characters and call it a string.

In C and C++ programming, apart from using an array data structure to access a string, we can create a string using pointers.

String as an Array

Conventionally, we use an array data structure to create a string. An array provides a simple way to represent a string so that all its characters are stored in sequential order and the complete string can be accessed by a single variable name.

Behind the Code: The string Hello will be stored in the array memory as follows:

To access the elements of string we can use indexing.

String as a Pointer

Using a pointer, we can access the string elements stored in the form of an array. As we know that the pointer should be of the same data type as that of the variable whose addresses it is supposed to hold, so for our example, the pointer would be of char type. A pointer can only hold one address at a time.

We hope that after reading this array vs pointer string article, you have developed a sound knowledge of what pointers and arrays are, and how they are different.

An array is a data structure that stores data elements of a similar type. It stores all data items sequentially in memory.

A pointer is a unique variable that stores the memory address of another variable.

A string is a collection of sequential characters. To create a string, we use the array data structure as it sequentially holds the data items. So, a string is simply an array of characters in C.

When you use a pointer to access the elements ot characters of a string, it provides better performance than array indexing.