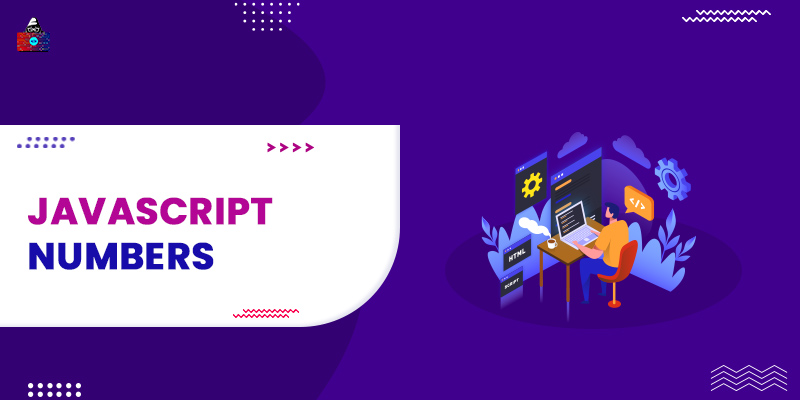 Unlike other programming languages in JavaScript, we only have one type number that represents all the numbers including integers, floats, real, decimal as well as complex. We can either use decimal points or simple integers to represent a number.

To represent a very small or big number we can use the exponent notation in JavaScript.

The e suffix after the number represents the exponent power.

Unlike other programming languages, we do not get dedicated keywords to represent float, integer, short, decimal, or double numbers in JavaScript. JS follows the international IEEE754 Standard to store all the numbers as double-precision floating-point numbers. According to the format JS use 64 bits to store a number, out 0f 64 bits 0 to 51 bits assigned to the number or fraction part, 52 to 62 bits allocated to the exponent part and 63 bit allocated tot the sign.

If we talk about the precision of numbers represented by JavaScript, JS only precise the numbers with or without decimals accurately that are 15 digits long.

If a number contains more than 15 digits, JS will not be able to maintain the number precision.

JS numbers show a very unique nature when operating them with JavaScript string. The JS engine takes care of all the implicit type conversions and returns an appropriate result.

Whenever we use the number with string along with + operator, it will always treat the number as a string and perform the concatenate operation, not addition.

In the above example both a and b were numbers still the + operator performs the concatenation operation, not added because the statement before a+b was a string so the JS engine converts the complete statement as a string. Let's say you do not want to perform concatenation when both the variables are numbers and the rest of the statement is a string, there we can use the brackets, so the interpreter first executes the bracket and all of its operations then, the rest statement.

Other Arithmetic operation between string and numbers

Even if we apply the arithmetic operators (except +) between two string numeric values, first both the string values will be converted into numbers and computed according to the operation.

NaN in JavaScript is a reserved keyword to represent Not a Number. NaN is generally used to indicate illegal number operations such as when we perform arithmetic operations between a non-numeric string and a number. Example

Unlike other programming languages, JS does not throw an TypeError when we perform an arithmetic operation between a number and string or string and string, instead, it returns a new value NaN representing Not a Number. Example

JavaScript provides a dedicated Infinity keyword to represent an infinite number. The Infinite number can be positive Infinity or negative -Infinity . Because of this keyword, we do not have ZeroDivision Error in JavaScript. Example

In JavaScript, we also represent numbers in HexaDecimal format. To create a HexaDecimal number we can use the 0x prefix followed by the HexaDecimal representation of a number.

By far we have been declaring or defining numbers as a primitive data type, but JavaScript also provides a built-in Number() object, which can also be used to represent the Number data type.

In the above example both p_num and o_num represent the same value, and both can perform most of the similar tasks. But it always suggests using the primitive number data type unless you know why you are using the Number() object.