Array vs List: Comparing the Two Most Popular Data Structures 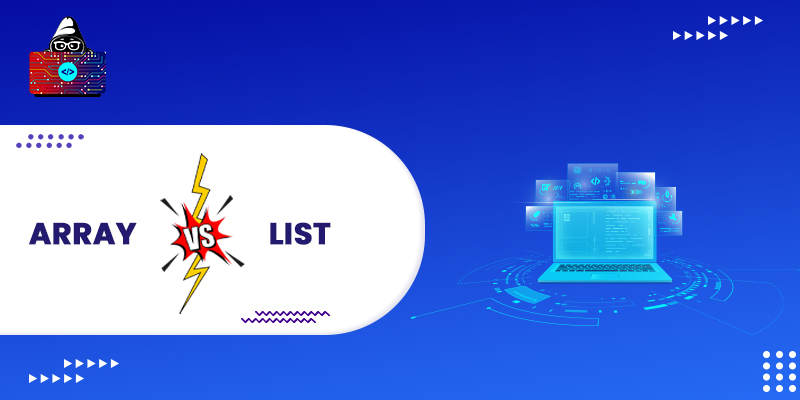 Array and list are two of the most used data structures to store multiple values. The main difference between them (Array vs List) is that while an array is a collection of homogeneous data elements, a list is a heterogeneous collection of data elements. This means that the list can be homogeneous or heterogeneous, and thus, it can contain elements of different data types at once.

An array is a data structure that contains homogenous elements or elements of the same data type. Elements in an array are stored in consecutive order, i.e., at contiguous memory locations. Almost all high-level programming languages - except Python - support arrays. The following section details the syntax for defining an array in various programming languages.

Syntax to Define an Array in C++

In the above code, we have declared an array arr of size 20, so the indices value of this array arr would be from 0 to 19.

Syntax to Define an Array Using NumPy in Python

Python does not have the concept of arrays, but you can use arrays in Python by importing them from its default numerical computation library, NumPy .

Syntax to Define an Array in Java

Operations to Perform on Arrays

Advantages and Disadvantages of Arrays

Lists are similar to arrays and store elements. The only difference is that a list can store heterogeneous data elements too. You can perform many tasks on the list. However, it has some shortcomings too. But the operations performed on the list are more efficient than the arrays.

Operations to Perform on Lists

Advantages and Disadvantages of Lists

That wraps up this array vs list comparison. Both are extremely popular data structure options while developing programs in almost all programming languages. Choosing between the two entirely depends on the project requirements.

A list is more suitable for storing data in Python because of many reasons, such as the ability to store any type of data and resizable to store any number of data items.

When you have a large amount of the same type of data, an array is ideal to use. On the other hand, a list is the best choice when you have a small amount of data with different types.

When you have a large amount of data of the same type, you must use an array as it consumes less memory. Go with a list when you have data of different types.

As an array stores the data elements of the same type, it is faster than a list (which stores heterogeneous data items).