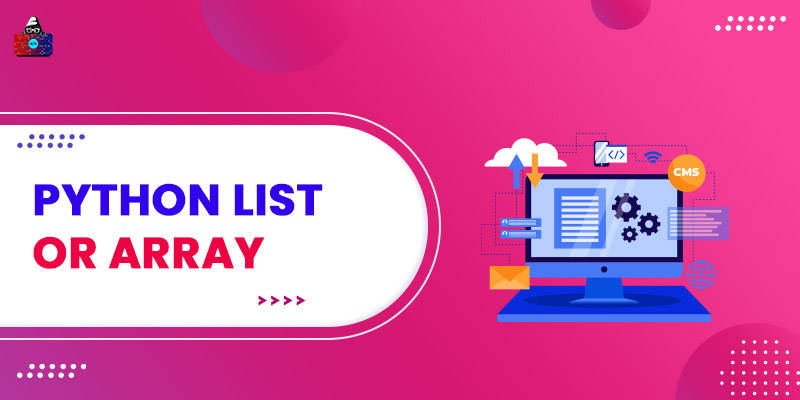 Mostly all the Programming languages use the concept of Array, but in the case of Python, it doesn’t. Python is one of the most powerful and popular languages out there. It has many data types such as Integers, Float, List dictionaries etc. but when it comes to the concept of array Python does not support the concept of the in-built Array data type. Instead of array Python has lists, Dictionaries, tuples and sets all these work as an array, but not an array. Having datatypes which look and works like arrays in Python were not efficient, as python has the versatile nature and missing the concept of an array could have been a bad deal for a Python developer , so to overcome this constraint the concept of Array introduced in Python but it was not declared as the built-in data type. If you have ever heard the arrays in Python , it’s not called as the Python array; actually, it’s the NumPy Array. Yet Python does not have the built-in type called array but if you want to use the array in python, you need to download NumPy.

NumPy is an Open source Python core library which makes possible to use the concept of Array in Python. The NumPy is used to serve the scientific calculation which cannot be solved by the Python list. NumPy is written in Python and C.

The answer as simple as that the calculation in Python List become complicated and does not give a satisfactory answer when it comes to the scientific calculation. The calculation speed of the NumPy Array is faster than the Python List.

Syntax of NumPy Array in Python

Python does have an object which looks and works like an array. In array, to call a particular value we use the index, so do in the list, dictionaries, tuples and sets we too use the index to call a specific value. list() lists are one of the objects in Python. The list looks like arrays which store multiple values. The main difference is that list can store non-homogeneous values in one variable that means a single list variable can store integers, float, Strings, and another object. A list can be created using the square bracket. As like array, the indexing of list starts with 0. In the list, the index can also be a –ve value.

The methods related to the lists are

#Syntax to assign a Dictionary

‘tuples’ are very similar to lists, the only difference is, tuples are immutable whereas list are mutable. The immutability in tuples refers that once the value is assigned to an index, after that you cannot grab the index to change the value if you try to do so it will show an error. Tuples use parenthesis to stores the value.

Methods related to the tuples

‘sets’ is the collection of unique elements in an unordered manner. Sets are similar to the list, only difference is you cannot assign 2 same values. If you try to do so it will treat it as one and do not show the repetitive value.