How to Become a Python Developer 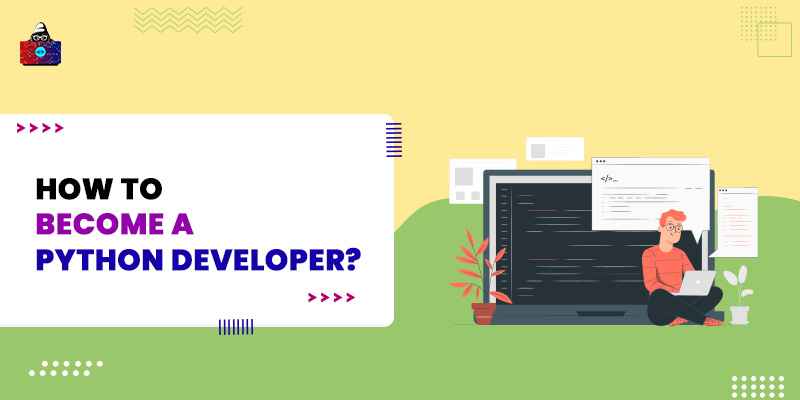 Python is one of the trending and in-demand programming languages in the computer science community. Dues to its wide range of capabilities and increasing popularity, many developers are switching their projects to Python. With its easy, simple, and clean syntax, Python is replacing several other complex programming languages.

One of the key reasons why Python has become highly popular in the past few years are the advancements in the fields of Data Science, Artificial Intelligence, Deep Learning, and Machine Learning. This is so because Python is one of the most suitable programming languages to use in data science, artificial intelligence, and machine learning.

Additionally, Python facilitates web development, software development, and game development. By learning Python, individuals get a wide choice of career options that they can pursue.

Who is a Python Developer?

Right now, you might be thinking, who exactly is a Python developer? Well, it is a little disappointing that there is no exact definition of a Python developer. There are many jobs and domains that require Python.

In the field of IT, those people who use Python as a tool to develop different types of projects basically are usually known as Python developers. In simple words, a Python developer is a person who uses the Python programming language to work on a wide variety of projects related to web development, software development, data science, artificial intelligence, machine learning, and much more.

Why Become a Python Developer?

While planning to learn Python, you may wonder why you should become a Python developer. Well, there are surely many programming languages that you can go with instead of Python to develop the same projects. However, learning Python is more of a personal choice.

Also, it becomes easy for beginners who are new to programming to get started with Python. Currently, Python offers more opportunities and a promising future for developers compared to several other programming languages. Data scientist, which is one of the highest-paid jobs in the IT industry, requires knowledge of the Python programming language.

A data scientist can use different programming languages rather than Python, but most companies hire data scientists with Python expertise.

Here are some key reasons to become a Python developer:

Salary is one of the key factors that every Python developer considers. The following table highlights the average salary that Python developers get in India for different roles:

Note: The salary mentioned above can vary.

Popular Tech Companies That use Python

Following are some of the most popular job roles for Python developers:

A Data Analyst is a person responsible for analyzing raw data and interpreting valuable information from that data. Data analysts need various tools to collect, organize and process data, and Python is one such tool used for data analysis.

Python offers several libraries for data analysis and visualization, such as NumPy, Pandas, Matplotlib, and Seaborn. To become a data analyst, you should understand the basic concepts of Python and statistics. Also, you need to have knowledge of various libraries, including NumPy, Pandas, and Matplotlib.

A Data Scientist is a professional who deals with huge amounts of data and performs data analysis, data manipulation, and data interpretation. In general, data scientists use Python as a tool for fetching and interpreting data. Also, a data scientist must have a good knowledge of various mathematical concepts, such as probability and statistics.

Additionally, it is essential for a data scientist to know how to use Python libraries such as TensorFlow, sci-kit-learn, etc., to create data models that can figure out the relationship between data and extract useful information that helps to make predictions and well-informed business decisions.

In machine learning, mathematics plays a vital role in solving real-world problems, and Python is just a medium to implement those solutions.

How to Become a Python Developer?

As we have mentioned earlier, there are many fields that a Python developer can choose. Also, each field requires a Python developer to have a different set of skills. For instance, when it comes to data science and data analysis, a Python developer needs to have knowledge of various mathematical concepts, including statistics and probability.

On the other hand, a Python developer working in the field of web development requires knowledge of various web development concepts and technologies such as HTML, CSS, JavaScript, API, HTTP, etc. Before you choose any specific field, you must acquire a complete knowledge of Python Fundamentals.

Here are a few steps that you can follow to become a Python developer:

How to Become a Web Developer?

How to Become a Data Scientist?

How to Become a Machine Learning and AI Engineer?

Python is a general-purpose programming language that has a wide variety of applications. You can use Python to develop solutions for real-world problems. It all depends on you how you look at a problem and try to solve it. Python acts as a platform that you can use to program solutions for different types of problems.

Through this article, we tried to guide you through the process of learning Python and other skills required to work in various fields, namely web development, data science, artificial intelligence, and machine learning. If you have any suggestions or queries, feel free to share them with us in the comments section below.

Yes, Python is definitely a good career choice. It is the top programming language in the list of popular programming languages, according to the TIOBE index. It is a versatile and general-purpose language that can be used for creating a variety of projects. So, when you develop Python skills, you will find a wide variety of employment options.

Yes, you can become a Python developer without a degree by taking online courses and Bootcamp. Also, you can opt for Python certification.

The median salary of a Python developer in the United States is $1 lakh per annum, while it is INR 4.5 lakhs per year in India.