Python vs PHP: Which One to Choose? 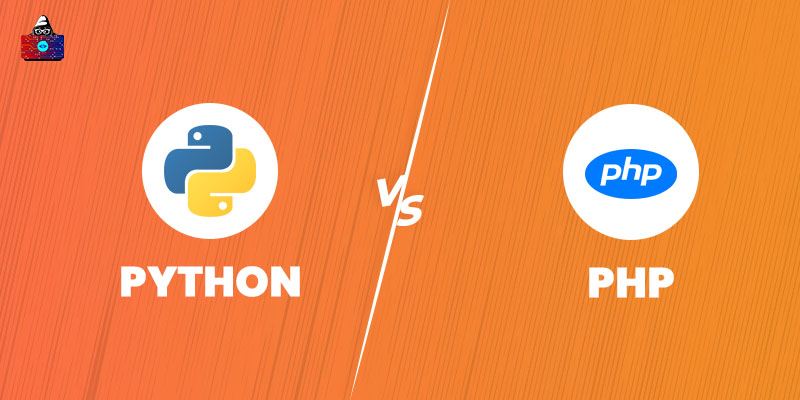 PHP and Python are both high-level languages. While PHP is specifically used as a back-end scripting language, Python is a general-purpose programming language ideal for data science and artificial intelligence. However, when it comes to web development, Python vs PHP becomes a topic of interest. When it comes to making a dynamic web application, people often choose PHP over Python.

Over 70% of all websites use PHP in some form. But with the advancement in Python and its frameworks, developers are rapidly moving towards Python over PHP to develop high-quality web apps. Thus, which one is better? Let's try to know.

Server-side means an application of PHP is saved on the server to run the PHP file apart from HTML. JavaScript and CSS are client-side languages, which means they can run in your browser. To run a PHP file on your browser, you need to install localhost, such as Apache. PHP was first introduced in 1994, and it was created by Rasmus Lerdorf. Earlier the PHP full form was “Personal Home Page.” PHP was never meant to be a programming language, but with time and effort, it became a programming language.

Advantages and Disadvantages of PHP

Python is one of the most popular programming languages of 2022. The future of Python is looking very bright. Developers are moving to Python for their projects, and as a consequence, the community of Python is increasing. With a simple syntax, Python is even lucrative for newcomers. In fact, many experts consider Python as the best programming language to start learning to program.

Guido van Rossum developed Python in 1989. In recent years, the popularity of Python has increased tremendously. The simple syntax and less jargon of rules make it easier to learn, and its versatile nature attracts developers to code on it. Python is everywhere, but if we see web development, the programming language is way behind other programming languages and frameworks. Internet claims that less than 1% of all websites use Python.

Advantages and Disadvantages of Python

While Python is a full-fledged programming language, PHP is a server-side scripting language.

Both are high-level languages, and all the coding is English-like. Now when it comes to the complexity of the syntax, PHP is similar to C, which is easy to read and understand. However, PHP is a little bit more complex than C. In PHP, semicolons, and brackets lead to errors that are often very hard to find. On the other hand, the syntax of the Python programming language is very simple as compared to PHP. Python uses indentation instead of brackets, which makes it easier to read and makes it a little bit error-proof.

Both the programming languages are popular, but when we compare the popularity level of both the languages, PHP is way more popular than Python to serve the web. PHP rules the web, with 70% of the websites using PHP in one way or another. Big players such as Yahoo, Facebook, Wikipedia, Flicker, and Tumblr prefer PHP instead of Python. Python is building momentum to power the web. It is Google who is hyping Python for working with AI and data science .

Now companies like Reddit, Pinterest, YouTube, Instagram, and Spotify are choosing Python for their projects. The future looks good for both languages. PHP is dominating the web right now, but it would not be surprising if Python takes over the web in the near future. But if you want something apart from the web, you can choose Python. Also, both languages allow learners to have a successful career.

Both languages have well-organized documentation on their official website. Python has more libraries than PHP, though.

What Language Should a Beginner Choose? PHP or Python

Before choosing between Python and PHP, beginners must know what they wish to do with it. If you want to be a back-end web developer or want to create a dynamic web application, you can choose PHP instead of Python. But if you are choosing PHP for web development, keep in mind that you should have some experience with coding. At least you should know the basic programming languages such as C or C++ . This will help you to understand PHP easily. Choosing PHP as the first language is not a good move. You can also create a dynamic web application on Python, but for that, you need to learn Python frameworks .

If you are not sure that you want to be a web developer or you want to learn programming languages for some other purpose, you can go with Python. The main thing to note is that PHP is limited to web development. You cannot go further with PHP. The web is the endpoint of PHP, but this is not the case with Python. It is everywhere, especially in data science and AI.

That sums up our Python vs PHP discussion. Both are popular programming languages . While Python is ideal for data science and AI, PHP is best for web development and back-end programming. To start programming, Python is the best choice.

Python is much easier than PHP to learn because of its simple and English-like syntax.

Yes, you can use Python instead of PHP for web development. In other terms, you can embed Python code inside HTML tags.

Python is a more secure language than PHP. It provides various security features that you can leverage to build highly secure web applications.

To learn the basics of PHP, you may need one month; however, the time required depends upon how much you invest per day. Mastering PHP programming requires a lot of practice that may take three to six months.

PHP is a back-end programming language. It is one of the components of the LAMP stack that stands for Linux, Angular, MySQL, and PHP/Perl/Python.