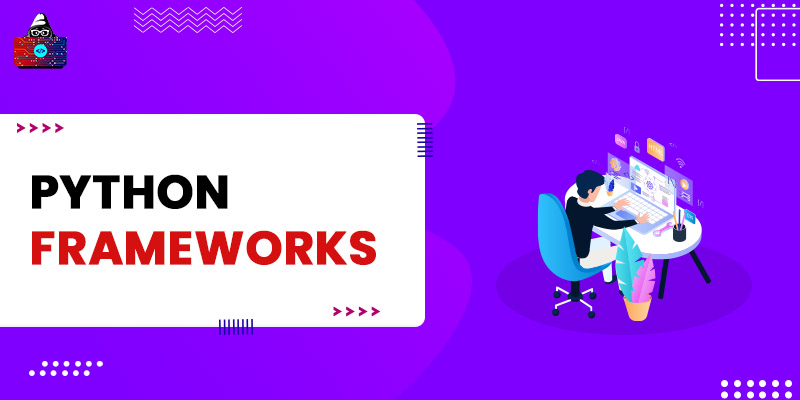 Python is one of the most popular languages in the programming industry. It is a high-level interpreted programming language that follows the concept of object-oriented programming. The availability of a myriad of robust libraries and frameworks is one of the main reasons for the extensive popularity of the language among the computer science community.

If you compare Python with other programming languages, you will find that it is the most straightforward language. Its simple syntax makes it a preferable choice among programmers. According to the TOIBE Index for the PopularitY of Programming Language (PYPL), Python tops the list as of October 2022.

As you can find a myriad of Python frameworks for web development, it is obvious to get perplexed in selecting the suitable one. The selection of a framework entirely depends on project requirements and developers’ preferences.

To help you select a framework, we have curated a list of the best Python frameworks for web development. These frameworks help speed up the development process and make you more efficient.

But before delving deep into the list, let us briefly introduce you to a Python web framework and its types.

What are Web Frameworks?

There are many definitions available on the internet about a web framework, but most are confusing because they use jargon or technical terms. This could make it difficult for a beginner to understand what actually a web framework is.

A web framework is a collection of libraries (predefined code) and APIs (Application Program Interfaces) that call a piece of code to perform a specific task. It eliminates the need to write code from scratch while creating a web application. Thus, reducing the time to delivery.

To put it simply, a web application framework (WAF) is a software application that facilitates the development of web projects, including applications, web services, web APIs, and web resources. It provides a standard way to create and deploy applications on the World Wide Web (WWW).

What is a Python Web Framework?

In addition, a web framework eliminates the need for developers to focus on low-level functionalities, such as process/thread management, sockets, protocols, etc. It allows developers to concentrate entirely on the core functionalities of websites. Also, it reduces applications’ time to market.

Here are some basic functionalities in web development that require the use of web frameworks:

Many people ask: Isn’t using an IDE enough for web development in Python? Why is it necessary to use a framework?

The answer to these questions is that a framework provides many benefits and facilitates web application development. It lets developers write more organized code, increase productivity, and simplify the development process.

The following are some remarkable advantages of using a web framework:

It is a framework that supports the development of front-end interfaces, back-end services, and databases. It is the one-stop solution for all your web development needs.

These frameworks work on architectures like Model View Controller ( MVC ) or Model View Template (MVT) and use Object Relational Mapping ( ORM ) for databases. Here, the developer does not need to depend on other libraries and frameworks.

It is a minimalist web application framework and is completely opposite to full-stack frameworks. It is a lightweight framework that does not offer multiple features or functionalities.

The following are some features that fully-fledged frameworks offer but microframeworks do not:

If you choose to use microframeworks, you need to put a lot of effort into writing code compared to full-stack frameworks. This is because they require you to add extra operations and requirements manually.

How to Choose a Python Framework?

Built on Python , Django comes with many built-in features and follows the MVC (Model, View, Controller) architectural design pattern. It supports built-in authentication and all the popular SQL databases. URL routing, user authentication, templating, and inbuilt database support are a few main features of Django. It follows the DRY (Don’t Repeat Yourself) principle.

Object-Relational Mapping (ORM) is another key feature of Django that allows storing and retrieving application data from different SQL databases, such as MySQL, Oracle, SQLite, and PostgreSQL.

With Django, we can build any web application, small or big. However, this framework is ideal for big projects. Although the learning curve is steep, its official documentation makes it easy to start.

Stands second in the list of popular Python web frameworks, and many web developers suggest learning Flask before Django. With more than 52K stars on GitHub, Flask is gaining immense popularity among developers.

While Flask does not provide as many features as Django, its flexibility and easy-to-learn characteristics make it the preferable choice. Since it is lightweight, it is faster than Django. It is for developing simple and small web applications.

Unlike Django, Flask provides developers more control over libraries' dependencies of the web application. Also, it is adaptable due to its features, such as modular, request handling, and RESTful request dispatching. It requires a Jinja2 template and Werkzeug WSGI toolkit. Moreover, Flask is highly compatible with Google App Engine.

An object-oriented framework that follows a minimalistic approach, CherryPy helps developers create small and simple web applications. Being lightweight, it is fast and reliable. It has an in-built plugin system and supports profiling, decoding, authentication, static content processing, and testing.

Although it is not much popular, Pyramid is as powerful as Django. It has more than 3K stars on GitHub, and an active team of developers is continuously managing and updating this framework. It was designed to provide ease to web developers while creating web applications.

The primary aim of Pyramid is to achieve more with as much minimalistic complexity as possible. It helps you build simple as well as complex web applications. As a direct comparison with Django, Pyramid provides better URL generation, API development, and testing capabilities.

Bottle is easy to learn and is only recommended for creating single-page web applications or ones that require less than 500 lines of code with third-party HTTP/WSGI servers. As it is ideal for small applications, you can create them with just a single source file. Other than the Python Standard Library, Bottle has no dependencies.

Moreover, the framework has a built-in template engine, functions, and exceptions. You can use all these objects in your code without needing to use the import statement. What I like the most is that it allows you to work closer to the hardware.

Kevin Dangoor and Mark Ramm developed TurboGears in 2005 as an open-source project, making it accessible to everyone. It makes building flexible and data-driven dynamic web applications easy.

Furthermore, TurboGears has a built-in gearbox tool kit that allows web applications to connect with popular WSGI-compatible web servers, such as Apache and Nginx .

The use of Web2Py reduces the workload of developers by eliminating the need to write code for everyday development tasks. For example, the framework offers a built-in form class. As a result, writing code from scratch to add forms to applications is no longer necessary.

It is an all-in-one package with a fast, multi-threaded web server, web-based interfaces, and an SQL database. A single instance of Web2Py can run multiple websites leveraging different databases.

One major downside of Web2py is that it is only designed for teaching and educational purposes. Hence, it is not used in many real-world projects. Also, it does not provide support for Python 3. 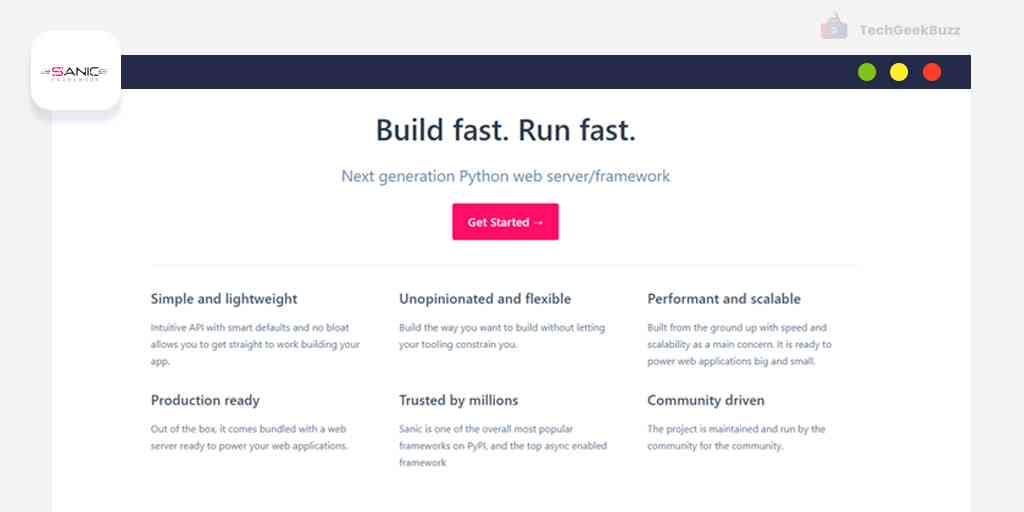 An open-source asynchronous framework, Sanic, is designed for handling fast HTTP responses via asynchronous request handling. It is developed on top of uvloop event loop, which is a replacement for the built-in asyncio event loop. This makes Sanic a blazing-fast framework.

Sanic is like Flask, which works on Python 3.5 and later versions. It supports asynchronous request handlers that make it compatible to work with async/await functions of Python 3.5. Furthermore, it has undergone a test with one process and 100 connections. It was proved that Sanic could handle 33,342 requests in a second. Isn't it amazing?

Although it provides tremendous speed along with features like routing, cookies, versioning, class-based view, and sockets, Sanic does not offer any database and templating support, which is a significant setback.

With an open-source asynchronous Python web framework, Tornado also serves as a scalable and non-blocking web server. It solves the issue of C10k, which means it can handle 10K concurrent connections at any given time.

Tornado is well-known for its outstanding performance. As a result, it is ideal for building performance-critical web applications that require handling thousands of concurrent connections.

A few common features include user authentication, authorization, and a template engine. It consists of three modules, as follows:

Tough introduced in 2001, CubicWeb , a full-stack, semantic, open-source Python framework, was available publicly in 2008. It is a data-driven framework that allows developers to create customized views based on the defined data models. It makes the development of large-scale semantic web and linked open data applications hassle-free.

CubicWeb features a variety of reusable components like comments, messages, emails, and files. Instead of following the MVC architectural design pattern like other Python frameworks, CubicWeb is based on a cube. To create a single instance, you need to combine multiple cubes with configuration files, a web server, and a database.

It is a Python 3 web API framework for creating APIs over multiple interfaces. Once you create an API, you can use it as and when required. With the help of multi-threaded interfaces, Hug simplifies creating and prototyping RESTful APIs.

If you leverage Python 3, Hug is one of the best and fastest web frameworks. It enables one-click deployment over HTTP requests or responses or through the command-line interface (CLI).

This framework was developed by keeping performance in mind. It uses resources only when required to provide high performance and leverages CPython for compilation. As a result, it remains one of the fastest Python frameworks.

A micro web framework, Falcon, is blazing-fast and ideal for creating web APIs,  back-end services, and microservices. Also, it works well with asyncio (ASGI) and gevent/meinheld (WSGI). Many renowned companies use it to create mission-critical services.

Falcon emphasizes the stability, correctness, and performance of web APIs and microservices. It follows the REST architectural style and aims to attain 100% code coverage. It comes with many add-ons, templates, and packages, that you can use in your project.

A powerful microframework, Dash, makes it easy to create analytical applications in Python. It is the most preferred framework among data scientists who do not have a good grasp of web development.

You get everything with Dash you need to create cross-platform, mobile-ready web applications. It provides many database customization options that help you create intuitive dashboards.

Here ends our list of the best Python frameworks for web development. All of the aforementioned web frameworks facilitate the creation of web applications by handling low-level functionalities and allowing you to focus on core features.

Learning one of the above frameworks can be a great idea if you want to work with Python as a back-end developer. Django and Flask are currently the most popular ones. The next on the list is CherryPy, having the potential to become the next big Python framework.

Based on your project requirements, choose the right framework. In addition, the choice depends on a developer’s preference, working style, and comfort.

A Python framework is a collection of pre-developed or readymade packages and modules that you can use immediately while creating web applications using Python. It acts as a foundation for Python web development and eliminates the need to develop everything from the ground up.

The three different types of Python frameworks include a full-stack framework, micro-framework, and synchronous framework.