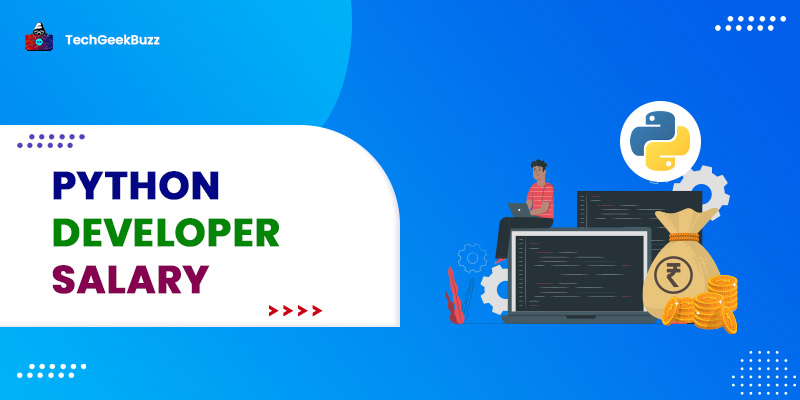 Python is one of the most popular High-Level programming languages, and there is a bright future for python developers. It is a very versatile programming language that covers many areas of computer science, from web development to Machine learning, so it promises many job opportunities to its developer.

Here in this article, we have covered the various aspects related to the python developer Job and its salary.

Who is a Python Developer?

Whether you use python for web development or to build logic for machine learning, you are considered as a Python developer. Though python is primarily used to build back-end web applications and data science, there are many other platforms where we use python, such as we can build games with python or even use it for Scripting.

Versatility is one of the main features of Python , which make it open for various platform, this means there are many platforms in computer science where we can use python, and for each platform, we have specific Jobs.

Data scientists and Data analysts sometimes sound similar, but they are not. You can say that a data scientist is the upgrade version of a Data Analyst. A data Scientist deals with data analysis, data manipulation, data interpretation, data models, etc. They use Python as a tool for fetching and interpreting the data, a data scientist must be acquitted with mathematical concepts such as probability and statistics.

Also, it is essential for data scientists to know how to use python libraries such as TensorFlow, sci-kit-learn, etc. They use their skills, data, and Python collectively to create models that are used to predict future outcomes. Many fields of data science intercept with Machine learning concepts.

A Data Analyst is a person who analyses data and interprets valuable information from that data. To analyze Data, we need tools that can fetch the data and arrange it according to the developer, for that, we use python. As we know, Python has a large number of libraries for data analysis and visualization, such as NumPy, Pandas, Matplotlib, seaborn, etc.

To be a Data Analyst, you should have complete knowledge of basic python along with NumPy, Pandas, Matplotlib libraries, and mathematic statistic concepts.

In machine learning, we also use Python and some of its libraries, such as TensorFlow and Scikit, to apply the concept of the machine learning algorithm. Apart from python and its library, a Machine learning engineer must be acquitted with mathematical concepts such as Statistics, Probability, Calculus, etc.

Mathematics plays a vital role to solve real-world problems in machine learning, and python is just a medium to implement those solutions. ML has many algorithms that a Machine learning engineer should be familiar with.

At last, it all depends on the engineer who comes with the different and efficient algorithms that can contribute to machine learning development.

Machine Learning is a subset of Artificial Intelligence, so the Artificial Intelligence engineer must know all the concepts of Machine learning and all of its algorithms. AI also deal with Deep learning and Neural network, which mean an AI engineer must be someone with great knowledge and problem-solving skills. AI contains many complex algorithms, and what programming language rather than Python could be appropriate for this.

A python software developer uses a core or basic python and some GUI libraries like Tkinter to make software for different platforms. Python does not have much effect on the software development market because there are many other programming languages that are doing great in this field. This could be possible in the coming years. Python also has a market in platform-wise software development.

There are various factors on which the salary of a python developer can vary, and one of the most common influences is the type of Job, as we know that every person is paid according to the type of job he is performing in the company. There is no doubt that a Machine learning engineer who uses python will be paid more than a python backend developer, but this case is not always true either.

The experienced Python back-end developer could be paid more than an inexperienced machine learning engineer. That’s why we considered various factors to evaluate the salary of a python developer. Yet, there is some standard which does not consider factors other rather than the type of Job and calculate the average salary of the Python developer according to the types of job they are performing.

There you will clearly see that hot topics such as AI and Machine learning engineers paid a lot more than any other Python developer.

Python Salary Based on:

Experience plays a vital role to decide the salary of a python developer. You can see it by yourself when you join a company. No doubt, a Sr. Python developer would be paid more than a Jr. Python developer no matter what skill sets both have. Here, experience relates to the number of years you have given to python.

For a standard salary, we have taken the location of the United States.

2. Based on Skill Set

The salary of a Developer can also vary with the location where he is working. For example, the developer who works at Google California would be paid more than a Developer at Google India; the location matters. The average salary of a developer in the USA is $112k per year, and in India, in the best location, the average salary is 734K rupee per year.

Python developers are in Demand because of the use of Python on various platforms, and currently, on Stack Overflow, Python rank 3 rd as the most popular programming language. If we compare python to other programming languages, the number of python Jobs posted every month is raising, and the average salary of python developers is also increasing.

Whether you are using Python for Web-development or machine learning, there is a job for every python developer. Yes, you will get paid more for Machine learning and Data Science, but if you are experienced with full-stack web development, your salary can raise salary. No matter what, python promises a bright future to all of its developers.

Unequivocally, Python development is a good choice because of Python's versatility and applications in different lucrative fields, such as AI, ML, web development, and data science. When you learn and champion Python concepts, you can choose your field and develop other essential skills. You will definitely land a great job.

Yes, Python obviously has a future. As of September 2022, Python tops the list of the popular programming languages according to the TIOBE Index 2022. Also, the language is widely used in AI and ML, which are breakthrough technologies that show no signs of slowing down. So, Python definitely has a bright future.

Yes, Python is one of the most preferred languages among data science professionals, web developers, and AI and ML engineers. Also, the simplicity and low learning curve of Python have made it possible for even beginners to learn the language with ease.

Python is a general-purpose programming language used for creating a variety of software and web applications. Along with them, it is also used for data analysis, task automation, and data visualization through its vast set of libraries.