Best Online Python Compilers to Run Code in the Browser 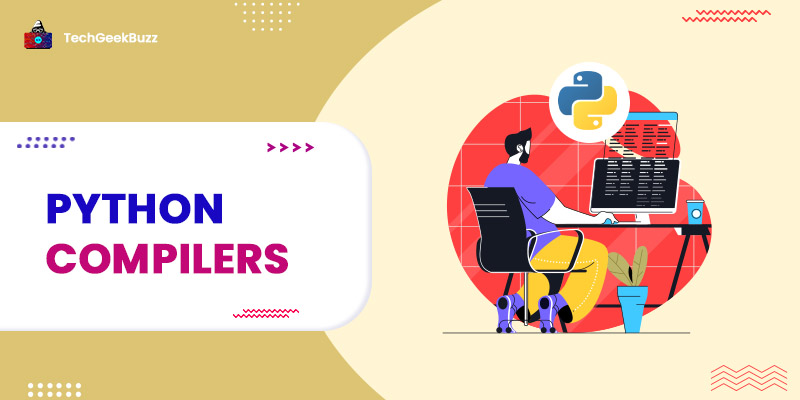 An online Python compiler is a way to run Python that saves you from the hassle of installing the Python environment on your system. You simply need a system, a web browser, and internet access to start working with Python. Python is not a heavy software that requires high-end computing power, and even single board computers like Raspberry Pi can install and run Python with ease.

But it’s good to know the alternative to the traditional way of running a Python program, i.e., online Python compilers. They provide functional interfaces to write and execute Python programs so that you can run a Python program anytime and anywhere.

How to Run a Python Program Online?

As Python is one of the best programming languages out there, it has the highest number of active developers and tons of libraries to support it in various domains. When you start learning Python, you typically install the Python interpreter in your local system to run Python program files with the .py extension. If you do not install the Python interpreter in your system, you will not be able to execute the Python program, and this same thing goes for other high-Level programming languages like Java and C++.

But if you are working on a guest system or using a system that belongs to your colleague, friend, or a family member, then instead of installing Python on their system, it would be better to use an online Python interpreter to execute the Python program. Right now, there are many platforms present on the internet that provide online compilers and interpreters for different programming languages. With such platforms, you do not have to download the compiler and interpreter for the specific programming language, and you can compile and execute your code online using only the web browser. 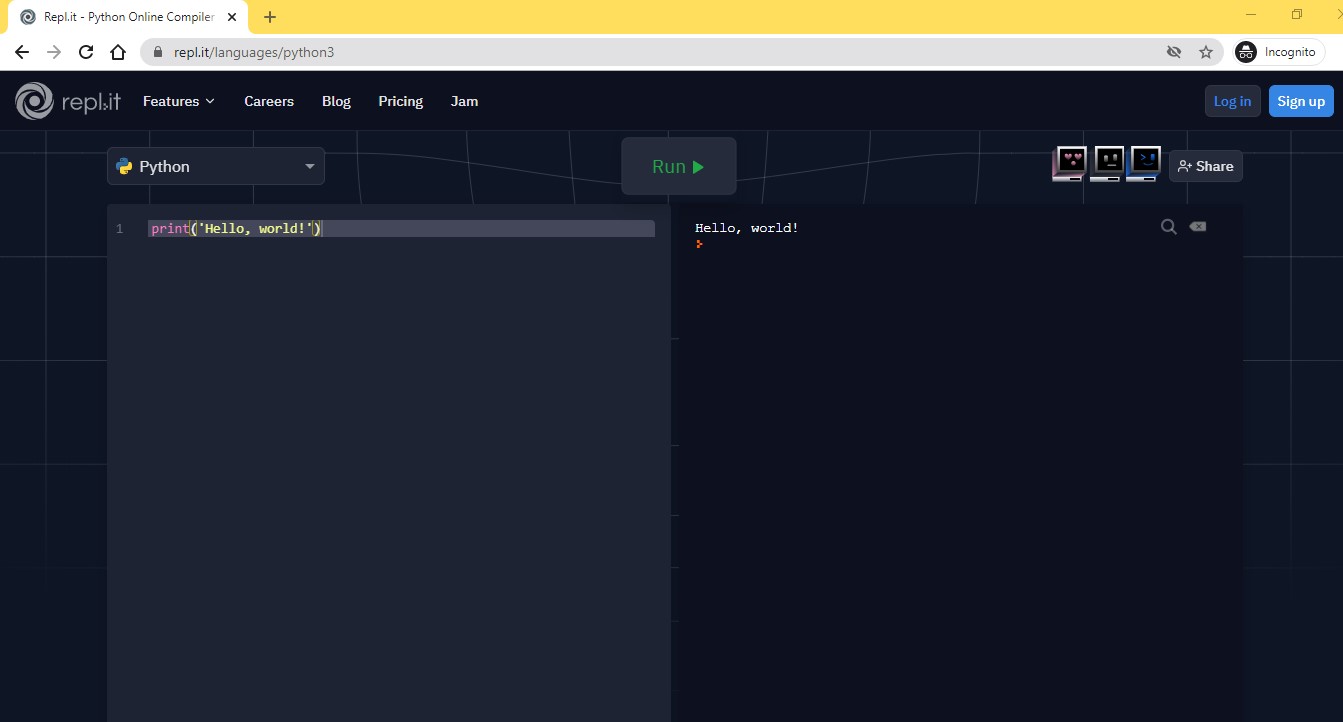 Repl.it provides a very intuitive and beautiful interface for executing Python programs online. It is one of the best online Python compilers with a dark mode code editor interface. It is a free-to-use online Python interpreter, and it can execute your Python code in no time. The output of your Python code will be displayed just on the right-side of your source code. Apart from Python3, it also supports code interpreter for Python2 and other different programming languages in case if you wish to execute your C++ or Java code. Preserving the active sessions is one of the best features of the Repl.it online compiler. You can resume your coding where you left it last time. Although you can use Repl.it without even logging in or signup, but if you do, you will be introduced to many features such as sharing code on GitHub and creating a working directory.

Pythonanywhere is a hosting platform that allows you to host Python-based web applications, but it also provides an unconventional shell-like online Python interpreter. The online python compiler provided by Pythonanywhere is called IPython, which is an interactive Python interpreter shell for executing a Python program. The IPython is generally used for Python with data science, and if you are familiar with Jupyter Notebook, you will notice that Pythonanywhere online compiler interface is pretty much similar to it. This is because Pythonanywhere and Jupyter notebook both use IPython. Many online Python compilers do not support the import of Python high-processing libraries like numpy, pandas, scipy, and beautifulsoup, but this is not the case with Pyhtonanywhere. With Pythonanywhere, you do not have to worry about installing these libraries all the important Python data science libraries are supported by Pythonanywhere IPython, and you can simply import and start using them. 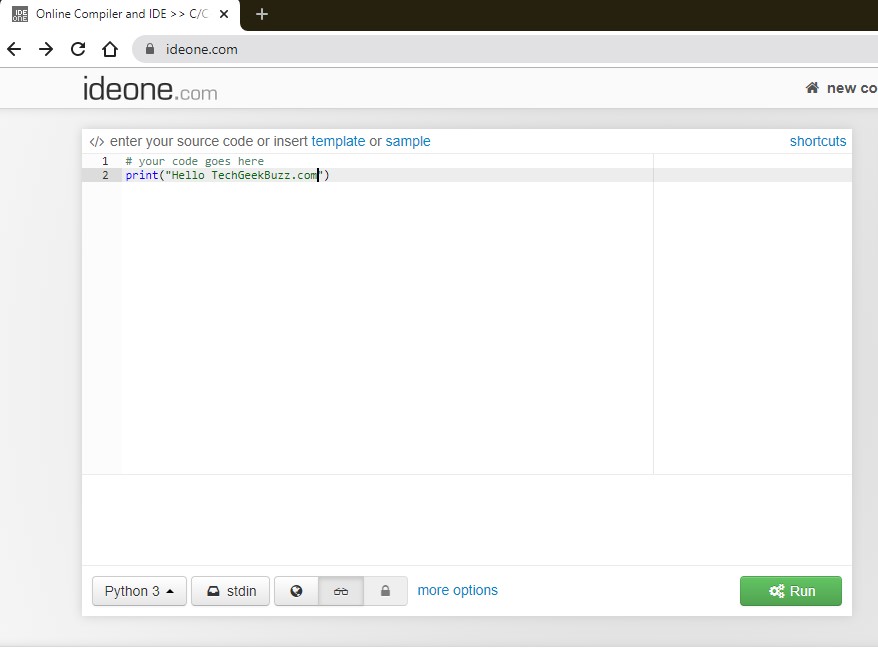 Ideone provides a moderate online Python text editor and compiler tool. It has a pretty simple interface, and it supports more than 55 programming languages. You can simply write your Python code on the provided text editor and hit the Run button to execute the code, And the output of the code will be displayed on the new page. It will also come with the feature of code visibility that allows you to share your code privately or publicly. As compared to other online Python compilers, Ideone can be slow, and its output formatting is also a little bit old. 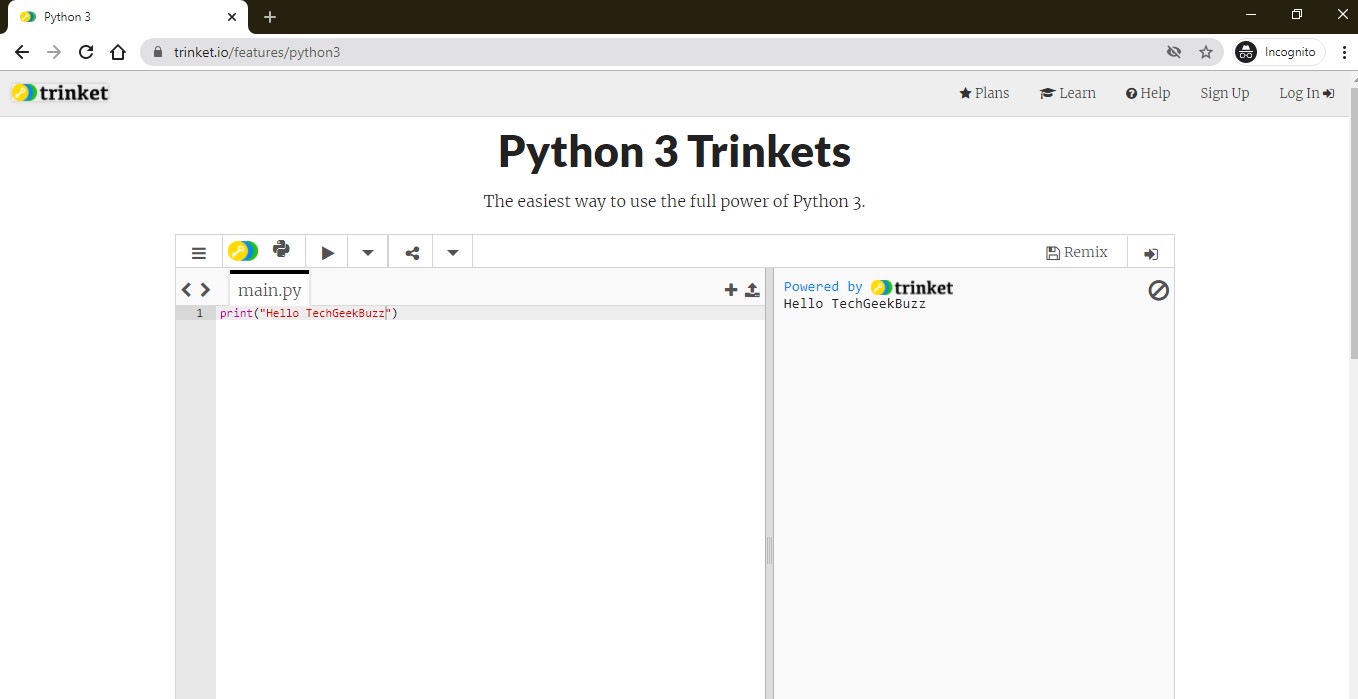 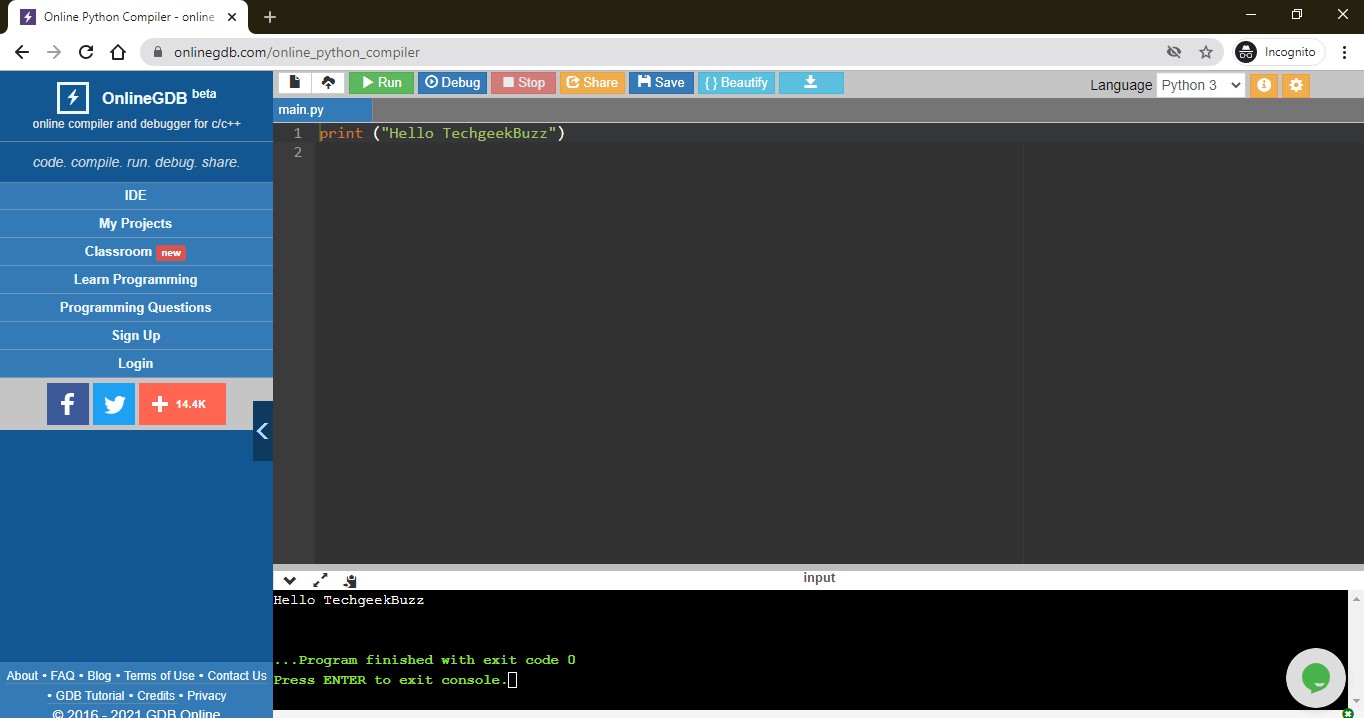 It is one of our favorite online compilers. OnlineGDB supports more than 20 languages, including Python3. It has a beautiful text editor interface, which felt like a standalone text editor of an IDE. It comes with many features such as beautify code, upload source code and download code. With upload source code, you can upload a Python file to this online compiler and execute it online. You can also toggle between the light and dark modes, and it also allows you to customize the spaces for tabs and the font size. 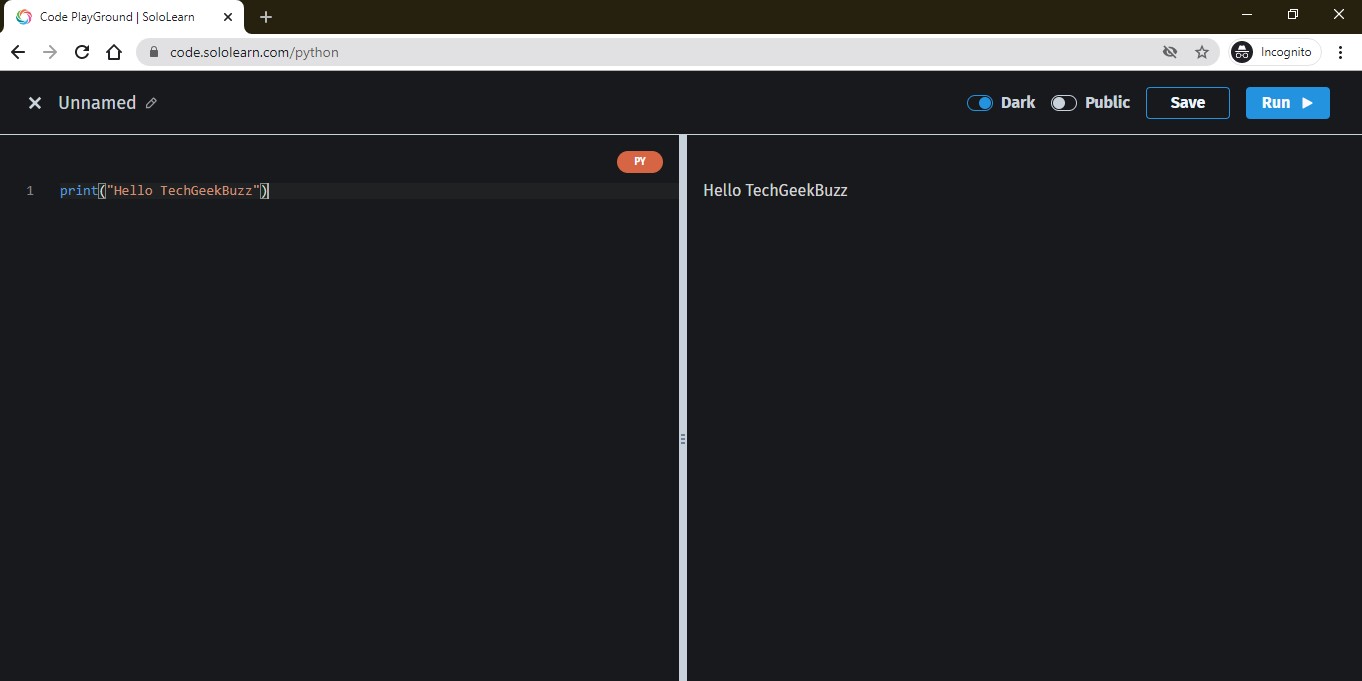 Sololearn is the best mobile application to learn and execute code. It also provides online compilers for different programming languages, and by far, it only supports online compilers for 12 programming languages, including Python. The online Python interpreter provided by SoloLearn is very interactive. It also provides options for light and dark modes that are pretty cool. The online code editor of SoloLearn also supports features like private and public visibility to share your Python program on the platform. If you log into SoloLearn, then you can also share your Python program with its community.

JDoodle is a fully-fledged online compiler, and it supports more than 50 languages. Although it has a minimal look, it comes with many features that many online Python compilers miss. Let's first start with its execution speed, it can run your Python program online within no time, and the output of the program will be displayed on the same page. Once you are done with writing and executing the program, you can save it to the online projects that can be accessed later. Isn't it cool! It also provides a toggle feature to toggle between Dark and Light code editor mode. And you can also upload your Python from your system and execute it online. 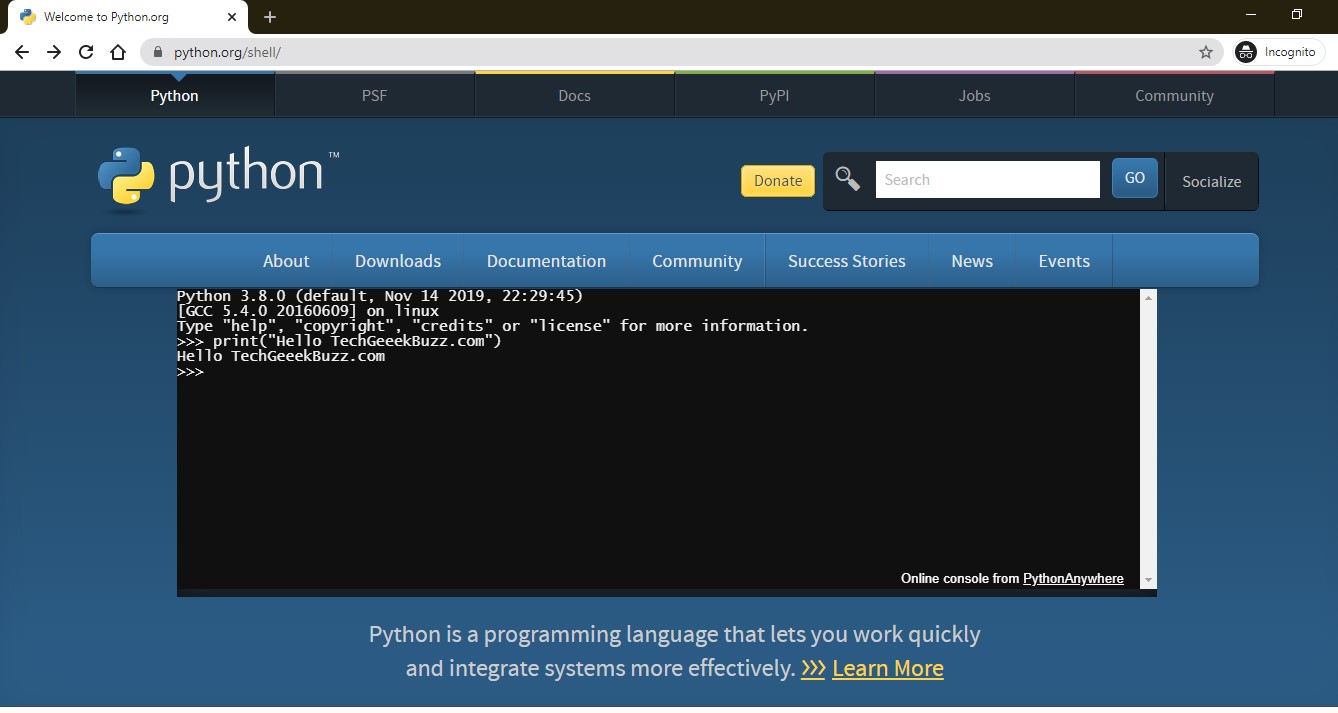 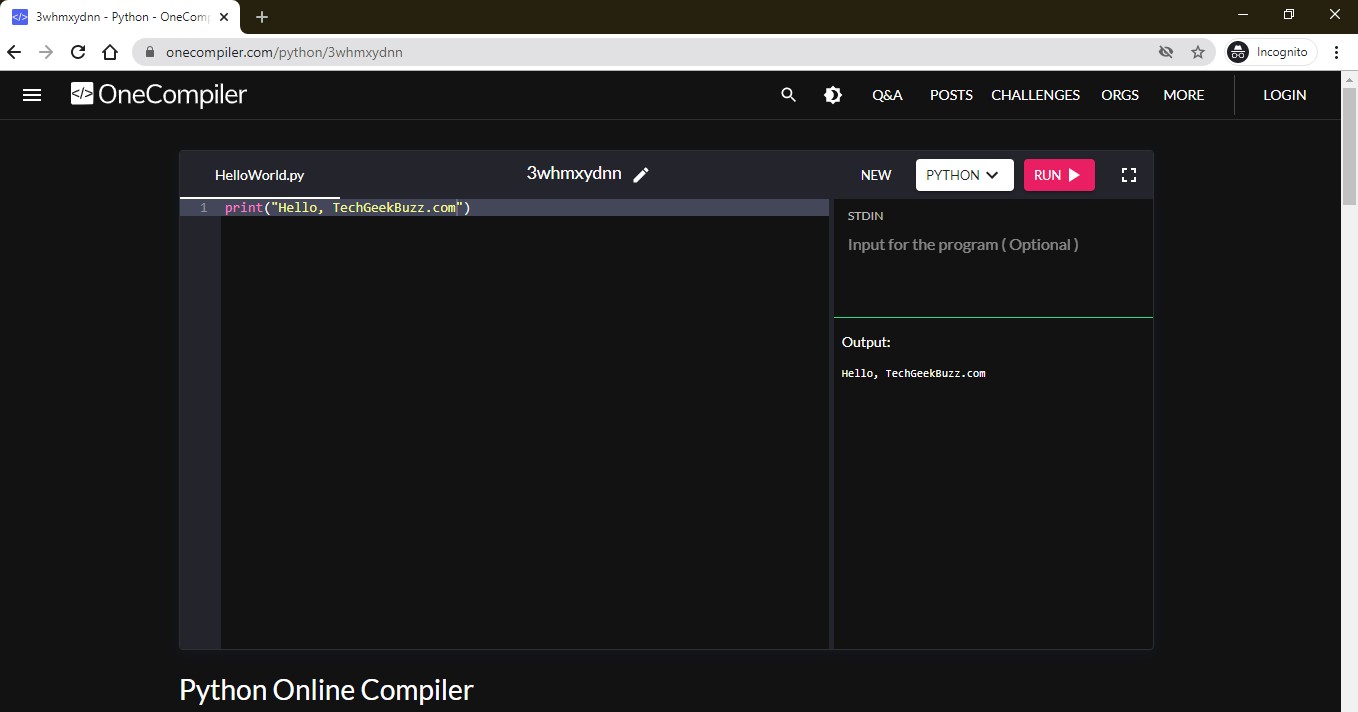 OneCompiler is an online compiler that supports 40 different programming languages, including Python. It has a minimal interface with the option to toggle light and dark editor modes. With OneCompiler, you can write a Python program, execute it online, and even share it on different social platforms. The execution speed of OneCopiler is also very good, and it shows the output of the source code on the same page. 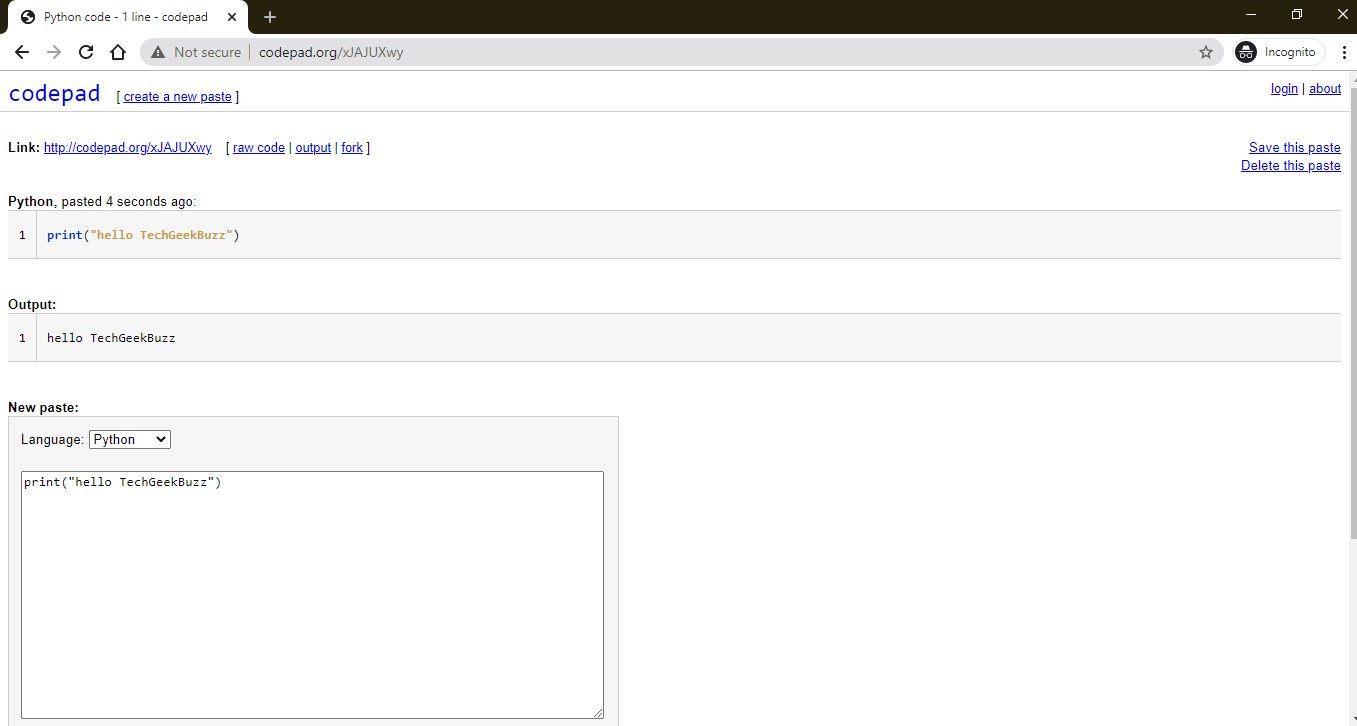 CodePad is a very minimalistic online compiler. However, compared to other online python compilers, it is very slow. It even does not offer many features, apart from code visibility, public or private. Despite being simple and slow, CodePad will execute your simple Python program and give you the appropriate output. Do not expect more from this simple online compiler, and you can use CodePad for simple 10 to 20 lines of Python programs.

With this, we have reached the end of our article on the best online Python compilers in 2022. We only suggest using an online Python compiler if you do not wish to install Python on your system or you are using a mobile device to check the output of a Python program. Among the top 10 online Python interpreters that have been mentioned above, Ideone, onlineGDB, and Trinket are the best ones. If you like this article or have any suggestions, please let us know by commenting down below.