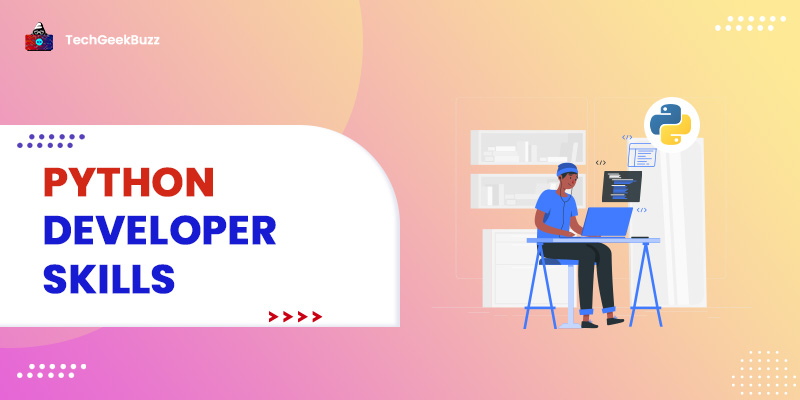 Python is hot right now; according to TIOBE, November 2020 Index, Python emerged as the 2 nd most popular and widely used Programming language. 2022 is around the corner, and it is the best time to learn Python. Only python coding skills are not enough to be a good Python developer. There are many other Python and computer-science related skills you need to master if you want to shine amongst other Python developers. When you go for the Job interview, there you cannot only play on your Python coding skills. You have to be ready according to the market demand. Unlike other programming languages, Python is not a domain-oriented programming language. The versatility of Python is one of the main reasons for its popularity. Python can perform a myriad of tasks in the industry, but python can not do everything alone. A company does not rely on a single tool or programming language, so you need to learn more than Python programming if you want to be the best Python developer. Here in this article, we have listed the top 15 Skills you must have if you want to be a better or best Python Developer.

If you want to be the best python developer in 2022, here is the list of the top 15 skills you must have.

The first step to being a python developer is learning python. Before jumping into the ocean of Web-frameworks, Data Science, Machine Learning, AI, and Deep Learning, you have to master Python's core concept. Because when you write code for big projects or build ML and AI models, you will be using the basic python syntax and concepts. The core Python includes the following topics

Click here to know more about core Python concepts. Core concepts are essential. Until you master the basic Python, you should not consider moving further and opting for complex tools like Python for data Science or web-development. If you are done with basic python, you can test your python skills by building Python Projects .

Python has many libraries in its arsenal, and its package manager pip makes it easy to install and uninstall libraries between the Python environment. The official Python repository, the Python Package Index (PyPI), contains more than 241K libraries and Frameworks. With so many libraries available in python, it becomes easier for the developers to use python in various domains. Python libraries are one of the main reasons for python's popularity and versatility. As a Python developer, you should know how to install and manage different python libraries. With the python package manager (pip), you do not have to worry about library management. You should still know how it works. Installing and managing libraries become essential when you use the virtual environment for your projects. As a python developer, you will be exploring many libraries, some for fun and some for real tasks. You should also know how to read the library documentation because documentation is the most reliable and efficient resource to know about the library. Mostly all the professional Python developers fetch the library to explore all the available functionalities.

High-Level Programming Languages are designed so developers can solve problems by writing some instructions in high-level. It is a no-brainer that you should know how to write optimize algorithms to solve the problem as a python developer. To enhance your python coding and problem-solving skills, you can joins platforms like codeforces.com, hackerank.com, leetcode.com, etc. There you can solve problems using Python programming language and test and hone your problem-solving skills.

It is impossible to write programs without committing any errors. In your programming journey, you will be commenting on many errors if you want to be a good python developer, you should know how to read and debug errors. There is a famous quotation amongst programmers “The code is written once but read many times” this means you will be analyzing your code and debugging it after you write it. It might also be possible that you will be spending more time debugging your code than the time you have taken to write it. Testing is also part of software development; however, many organizations have different software development teams and software testing, teams. But in small companies, you have to write and test code on your own. Python comes with unit test libraries that help you to test your code. During the testing, you encounter bugs that need to be fixed before deployment.

This is a time of big data, and to store and manage the data, we require databases and database languages. Right now, SQL is the most popular Database Management System, and it is the standard language for Relational Databases. There are many SQL DBMS in the market, such as MySQL, PostgreSQL, SQLite, etc. And Python comes with inbuilt support of SQLite library. As a Python developer, you will be dealing with SQL databases more often, so you must know how the database works and, more specifically, how Relational Database works. And it goes without saying that you should also learn SQL.

Version Control is a software that keeps tracking your program code and helps you roll back to the old code or version if necessary. When you write source code for a program , you change your program multiple times, and the version control takes the snapshot of every change so that you could go back to the last change or previous-previous change. As a Python developer, you should know how to use version control. There are many version controls in the market, such as Git, Mercurial, Apache Subversions, etc. Amongst all, the Version Controls git is the most popular one, and it is used the most popular Repository website GitHub.

If you are into full-stack web-development, then Python can only help you with back-end scripting and logic. You have to depend on the front-end trinity HTML, CSS, JavaScript, and Front-end Frameworks for the user interface. For a Python back-end developer, it is also essential to know the necessary front-end tools. At last, it’s the Job of the back-end developer to integrate the front-end User Interface with the back-end logic. Big IT firms hire different developers for front-end and back-end, but you might have to deal with both ends of Web-development if you are working for a startup or small organization.

Programming is all about challenges and solving problems, and in your developer period, you will be analyzing thousands of algorithms of others and designing your own. Analyzing the problem and design the solution is the primary role of every developer. And the analyzing and designing skills come with solid experience and a handful hours of writing code and solving problems. As an experienced developer, you should write valid, clear, non-redundant, efficient, and optimized codes and algorithms. So, when the program goes for testing, there would be a minimum number of bugs.

Python for Data Science is a trending topic. Python offers many Data Science libraries that can help a data scientist deal with different algorithms and models. Right now, Data Science is growing at a tremendous speed, and it promises a bright and rewarding future to its developers and users. So, having knowledge of Data science with python is a must skill in today’s market. If you want to be a Data Sciences as a Python developer, then you must have hand-on-experience and knowledge of:

Data Science is a very vast field; other trending topics like Machine Learning and Artificial Intelligence also intersect this field.  If you are thinking of becoming a Data Scientist, you have to learn more than Python.

Deep Learning is a subset of Artificial Intelligence and Machine Learning. You are not supposed to have an in-depth knowledge of Deep learning if you are into Data Science and Web-Development. Still knowing the concept of deep leaning and Neural Network would be a great deal. However, if you are learning Data Science, you will be introduced to Artificial Neural Network and some of the deep learning concepts. If you are into Deep learning, then you should focus on its fundaments and these topics:

It goes without saying that you need good communication skills in every profession, and python developer is no exception. Your good communication will help you interact with the team and leave no confusion regarding the work. Communication is a must skill for a Python developer because as a developer, you will be interacting with many people and collaborating on various projects. So, you would want you and your team stay on the same page.

If you are using Python to solve problems, write applications, and build models & projects, you are a Python developer. But to be a better or best python developer, you need more than necessary coding skills; you need to update yourself with the current technology. And keep exploring the new tools and libraries. In this article, we have mention 15 top skills a python developer must-have. You are not expected to have all the skills, but you should have the surface knowledge of everything related to python. Learning Python is a never-ending process, and you cannot learn everything and every tool. It would be a great idea to pick a domain and hone all the skills it requires.  So if you want to be a good Python developer in 2022, you can consider these top python skills. People are also reading: