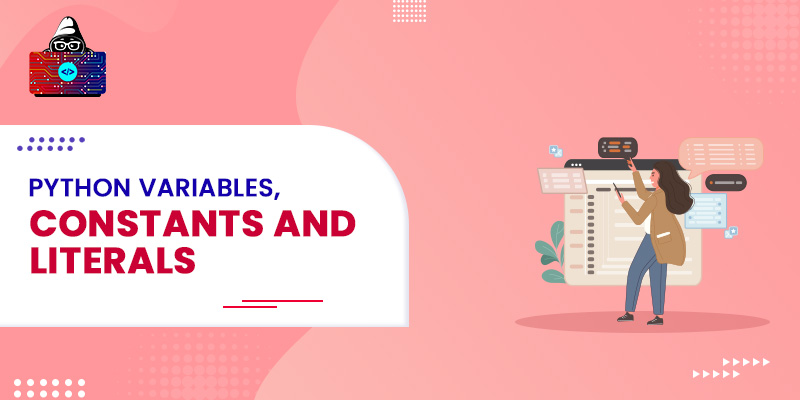 In Python, variables are those entities that are used to store values of a particular data type. In simple words, whenever you create a variable, it occupies some space in the memory according to the value assigned to it. Based on the data type, the Python interpreter allocates memory to the variable. Variables are used to get references for the values. For example, if you have a variable x with a value 40,000 then instead of writing 40,000 you can just write x to use the value .

If you have some experience with other high-level programming languages , such as C++ or Java, you must have noticed that if you declared a variable, you need to write its data type along with it before assigning a value. In Python, however, you do not need to declare a data type along with the variable. You can directly assign a value to it and the Python interpreter will itself understand the data type you have assigned to the variable.

Let’s understand this with an example:

In Python, we use equal to (=) to assign a value to a variable which is known as an assignment operator . The variable should be on the left of the assignment operator and the value on the right. You do not have this feature of variable declaration in Python. Here, you have to assign some value, and if you do not assign a value to the variable then the interpreter will throw an error. You can assign any value to the variable, either it could be an object, an address, a number, a string, a function, a list, a class, a tuple, etc.

You can overwrite the value of the variable by assigning it a value again in a new line. Take the following example to understand it:

In Python, you can assign a single value to many variables at once. e.g.

Unlike other programming languages, like C++ or Java, Python does not support constants. You can use the naming convention to capitalize ( PEP 8 ). According to it, if you write a variable in upper case it is termed as a constant, but actually, it’s a variable but we treat it as a constant.

Let’s understand this with an example:

Though both are variables, the variable name written in uppercase is termed as a constant in the professional field.

Literals can be defined as the data is given to the variables and constants. This creates confusion. Let's understand it with an example:

Types of Literals in Python

A given data to a variable or constant will be known as a string variable, if it is surrounded by the quotes and the quotes could be (“) or (‘). With the string literal, we can use the escape character by using a special sign backslash (\). e.g.

There are only two Boolean literals True and False. 0 is considered as False. e.g.

Python has a special literal known as None, which means nothing.

That was all about Python variables, constants, and literals. These are fundamental concepts in any programming language. Therefore, knowing them is important to make the most out of a program .