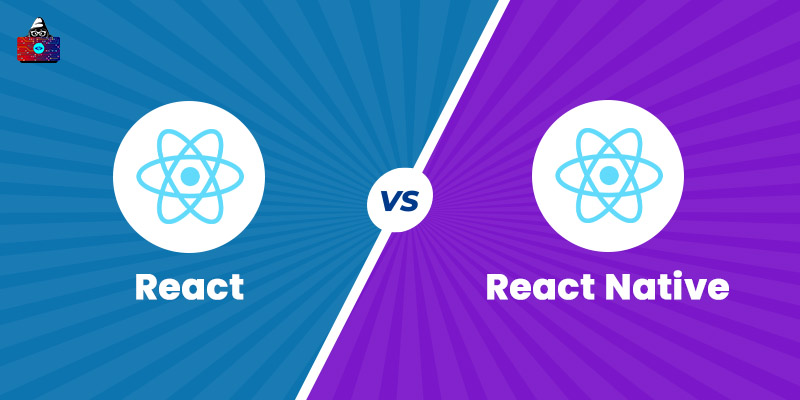 React and React Native are powerful technologies that serve as the backbone for many websites and mobile applications. Earlier, Facebook users could not view News Feeds and access chats at a time. To overcome this issue, Facebook introduced React, which is also known as ReactJS. ReactJS is a JavaScript library that allows developers to create interactive user interfaces.

On the other hand, React Native expands React’s functionality and provides a framework for developing native mobile applications. But many seasoned developers do not understand the differences between React and React Native.

Modern websites mostly follow the model-view-controller (MVC) architecture. In the MVC architecture , React is ‘V’, which stands for ‘View’. A single React application is composed of multiple components, where each component is developed using a small and reusable piece of HTML code. We can use these components with other React components to build complex applications.

React enables web developers to create web applications that can change data without reloading the page. However, the React library is not sufficient to develop full-fledged React applications since it is only concerned with state management and rendering that state to DOM. Therefore, you need additional libraries for routing and certain client-side functionalities.

Jordan Walke, a software engineer at Meta (formerly Facebook), got influenced by XHP, an HTML component library for PHP, and released the first prototype of React called “FaxJS”. This prototype was used in Facebook’s News Feed in 2011 and Instagram in 2012. In 2103, the company released React as an open-source library.

Later, Meta announced React Native, a framework for developing native applications for Android and iOS, in 2015 at React Conf. In just two years, the company then introduced React Fiber, a collection of internal algorithms for rendering. Since its inception, React Fiber has served as a foundation for React library's feature development.

The year 2017 witnessed the release of React 16.0. In 2020, the company released React v17.0, which was the first major release. However, React developer-facing API remained the same. The latest and most recent version of React is React 18.1, released in 2022.

The following are the remarkable features of React:

React consists of multiple UI components, where each component has its own logic and controls. Since each component is developed independently, we can reuse React components anywhere we need them. In addition, we can nest one component with other components to develop large, and complex React applications.

React leverages JSX syntax, which is the combination of JavaScript and HTML. With JSX, it is possible to embed JavaScript objects into HTML elements. In order to compile the code written in JSX, you need a Babel compiler as browsers cannot run it. This compiler transpiles the code in JSX into JavaScript. So, if you know HTML and JavaScript, learning JSX is simple.

React provides support for extensions so that users can leverage it for various purposes, such as mobile app development and server-side rendering. You can extend React's functionality using other tools, such as React Native, Flux, Redux, and many others.

DOM is an acronym for Document Object Model. React leverages a virtual DOM, which stores the virtual representation of UIs in memory, and the ReactDOM library synchronizes the virtual DOM with the real DOM. The Virtual DOM (VDOM) produces an exact copy of the actual DOM.

Whenever there is any change in the web application, the entire virtual DOM gets updated. React finds the difference between the updated virtual DOM and the actual DOM. It changes only those parts of the real DOM that have recently changed.

React displays data in the browser based on the conditions you provide inside JSX, as it supports the use of conditional statements.

The following are the key advantages of React:

React is simple to use since it follows a component-based architecture, comes with a well-defined lifecycle, and is developed using simple JavaScript.

Unlike Angular and Ember, React is easy to learn since you can use simple JavaScript with it. Therefore, if you have sound knowledge of JavaScript, it becomes easier to learn and use React.

The virtual DOM is the representation of a web browser’s DOM and entirely exists in memory. Therefore, when we write any React component, we do not directly write it to the DOM. Instead, we write virtual components, which React will turn into DOM, resulting in better performance.

The following are some significant downsides of React:

Since React is a constantly updating technology, there is no detailed documentation available. Therefore, poor documentation is one of the most significant drawbacks of React.

As mentioned earlier, React uses a special syntax called JSX, which is a syntax extension to JavaScript. But many developers, especially novice developers, complain about the steep learning curve of JSX.

React Native, also known as RN, is an open-source UI software framework. It is built on top of the React library. It is a JavaScript-based mobile app framework that allows us to build natively-rendered apps for Android and iOS.

With this framework, we can develop applications for Windows, macOS, Android, iOS, Android TV, tvOS, Web, and UWP by using the React framework with the native platform capabilities. In addition, React Native supports mobile app development for both Android and iOS simultaneously since we can write code that can be shared between the two platforms.

React came to life when Meta (formerly Facebook) decided to bring their services 'Facebook', a social media platform, to mobile devices. Instead of creating a native mobile application, they opt for running their service on an HTML5 mobile web page. However, this solution was not effective, leaving room for performance and UI improvements.

Soon in 2013, Jordan Walke found a method of producing UI components for iOS apps leveraging JavaScript. And due to this discovery, the company organized a Hackathon to discover the power of JavaScript for mobile development. This is how React Native was developed.

Initially, React native only supported iOS, but the company quickly made it available for Android as well in 2015.

Do you want to learn React Native and develop your own cross-platform mobile applications? You can purchase the course here.

Here are the salient features of React Native:

React Native enables developers to share a single piece of code between Android and iOS platforms. Moreover, React Native supports the sharing of codebase between React web applications. Such reusability of code between platforms saves a lot of time and reduces the overall cost of app development.

React Native has excellent rendering capabilities and concentrates more on designing intuitive user interfaces for mobile applications. So, we can say that RN is more UI-focused.

The following are applications developed using React Native for Android and iOS platforms:

Here are some popular benefits of React Native:

One of the most significant benefits of React Native is its short development time. It has multiple ready-to-use components that accelerate the development of mobile applications.

React Native has a wide array of ready-to-use solutions along with the React library to enhance the process of mobile app development. For example, it has a testing library that allows developers to write error-free and bug-free code. Besides testing, if developers wish to observe successful type checking, they can utilize tools such as ESlint, Axios, etc.

Backed by Meta, React Native has large community support. Being an open-source framework, a lot of passionate developers contribute their skills to enhancing the framework. Also, you can get help from expert developers from the community in case of any problem.

Below are the drawbacks of React Native:

To overcome the issue of debugging , React Native community and developers have enabled the integration of React Native with Flipper. In general, Flipper provides several tools useful for debugging, such as a tool for a bug report and log preview, a local database, and a performance inspector.

React Native is still in its improvement phase, and it is a new framework compared to other widely used frameworks for developing Android and iOS applications. Therefore, developers working with React Native may find several features missing in the framework.

The following table draws a detailed comparison between React and React Native:

Which one to Choose - React or React Native?

React is an ideal choice when you wish to build a stable user interface for web apps. On the other hand, choosing React Native would be a great move if you wish to develop native-like mobile applications for Android and iOS platforms.

React and React Native have their own set of benefits and limitations. Also, each of these technologies is ideal for developing a specific set of projects. For instance, ReactJS is a perfect choice if you wish to create dynamic and incredibly performant UI for web applications. On the flip side, choosing React native would be a great move when you need to develop a cross-platform mobile application or give mobile applications a truly native feeling.

While React is a JavaScript-based front-end library, React Native is a framework based on React for developing cross-platform mobile applications.

Yes, React is often referred to as ReactJS.

React is a front-end JavaScript library for creating user interfaces.

The choice between React and React Native depends on what you need to develop. React is ideal when you want to create interactive user interfaces for web applications, while React Native is a perfect choice for developing native-like mobile applications for Android and iOS.