What is Back-End Development? 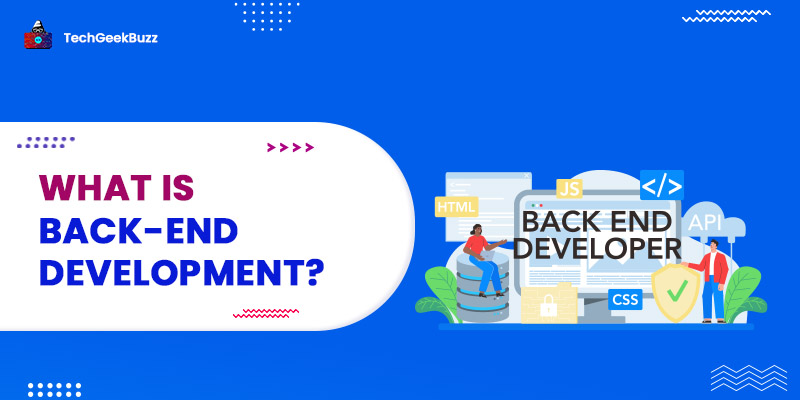 When we say web development it includes both Front-End as well as Back-End development. In web Development Front-End interact with the user and the Back-End deals with the database. Every website that you see or load on your browser is made up of a combination of front and back end technologies. There are many tools and languages developers use to create an effective webpage, the front-end uses tools like HTML, CSS, and JavaScript, and Front-end Frameworks to create attractive user interfaces and Back-End uses tools like PHP, Ruby, Python, Java, and backend frameworks to create an application that works along with Front-End and deal with Database.

Developers often like to stick with one programming language or with one specific field, so there are developers who only prefer to be a part of front-end or back-end development. There is a term in web development, Full-Stack Developers and they are those who possess knowledge of both front-end as well as back-end web development. Here in this article, we have provided a simple explanation of who is Back-end Developers and what are the minimum Skillset a Developer should have, to consider as a back-end developer.

What is Back-End Development?

Whenever you visit any website everything you see on the web page is a complete result of Front-End development, and when you perform any action on the web page such as login, logout, creating a new account, uploading pictures, sending text, etc. anything that is related to your data, that website can accept is a result of back-end development. A website contains a lot of things that a user can not see, this is mostly related to the data management of the user and the website itself, and this is the main function of Back-End Development. Back-End development is a concept of using Programming, and Scripting languages like Python, Ruby, PHP, Java, etc to create applications that can deal with data and provide logic to the webpage. In Back-End Development we create a web application so it could receive information from the front-end and manage it.

Who are Back-End Developers?

A developer who uses tools like Python, Java, Ruby, PHP, etc to create web applications, and can maintain server and database communication is a Back-End developer. When a user interacts with any website and provides it with some data like pictures, files, text, etc, the website need tools and application to deal with that data so it could be organized in proper way, here is the main role of the back-end developer comes in play. Back-End Developer builds and maintains technologies that can power the other components of the web application.

Skill and Tools required to become a Back-end Developer

Though Every programming language has standard support for one DBMS technology, programming languages like JAVA, Python, and PHP can deal with any DBMS tool. We know that data is the main concern of every back-end developer so to manage data we have Database Management Systems such as MySQL, MongoDB, Oracle, SQLSERVER, etc. Every Back-end developer must be aware of one of the Database Management System (DBMS) tools. These DBMS tools are mostly used to handle large data sets for small data we use cache which is related to the individual user.

With emerging technology in the web, API becomes one of the important parts of any Back-End web development programming language. API stands for Application Programming Interface and these are the pre-written code that can attach to the web application so your application can communicate with other applications. For example, we all aware of log-in tools, many times we see that when we want to log in to some website, it gives us the option to log in with google or Facebook. The tool which helps us to log in with google or Facebook to any website is APIs. With the help of our Facebook profile, we can link with other websites too that how the website communicates with our Facebook or Google profile and test the legitimacy of the user. With the help of login API, we do not need to sign up for every website we visit.

Roles of Back End Developer:

The salary of a back-end developer varies, it basically depends on the working experience and the skill sets of the developer. The standard salary of a web developer lies between 40,000$ to 70,000$