What is Virtual Reality? [Types, Applications, Pros, and Cons] 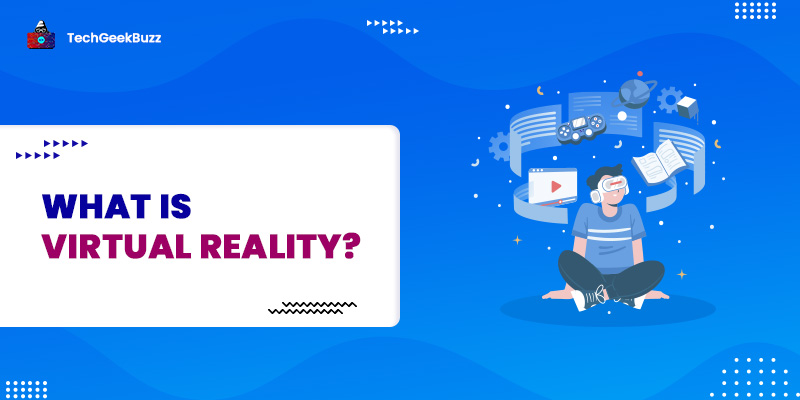 Wouldn’t it be wonderful to experience the things or situations that are not likely to happen in reality or have no existence? Earlier, it was completely impossible to experience unreal events or things. Fortunately, it is now possible with the help of VR technology to experience imagery or fictitious things, whether it is walking on Mars or driving a car on the moon.

VR stands for Virtual Reality, which is cutting-edge technology that helps you experience the real as well as the imaginary world. In simple terms, it is a technology that creates an artificial environment consisting of objects and scenes that seem to be actual. It lets users entirely immerse into a situation they are experiencing with the help of the artificial or simulated environment created using VR.

To explore more about VR, continue reading this article. Through this article, we will make you familiar with Virtual Reality, its origin, its types, and the technology it leverages. Also, we will walk you through the top applications, advantages, and disadvantages of VR.

What is Virtual Reality (VR)?

It is a technology that leverages computer systems to create a simulated three-dimensional (3D) environment that provides experiences analogous to the real world. This technology lets people experience a world that actually does not exist with three-dimensional visuals. People get completely immersed in the artificial environment and explore the virtual world the computer systems generate.

However, you may be wondering how this is possible? It is possible with the help of an interactive device, such as a VR headset or helmet or VR glasses. The entire display gets split between two eyes, along with stereo sound, which creates a stereographic 3D effect. This technology will give you the impression that you are physically present. In video games, for example, it makes you feel like you're one of the characters.

VR hardware and software together enable us to experience and entirely immerse ourselves into an artificial world. The interesting thing about VR is that as you move your head, the virtual world you are experiencing also moves with you. It makes people feel like they are present in the simulated environment mentally and physically.

VR is not a new technology, and it has been in use for around decades. Since its inception in the 1950s, VR has still been a cutting-edge technology. In 1957, Morton Heilig created a multimedia device named Sensorama. It is considered one of the first VR systems. However, in late 1987, Jaron Lanier coined the term ‘Virtual Reality.

Let us now discuss how VR has evolved from the year 1957 to till date.

The invention in the field of VR took off in these decades, and there were major improvements in VR hardware.

This type of VR is in contrast to non-immersive VR. In the latter one, you would not directly interact with the virtual world. Instead, you control a character that would interact with the simulated environment.

However, fully-immersive VR lets you take a real experience of the virtual world, from sight to sound and sometimes to smell sensation. It seems like you are actually present in the virtual world, and the events or actions that take place happen in real life.

Moreover, fully-immersive VR provides a realistic virtual experience by leveraging special devices, including VR glasses, body detectors, and gloves. They all consist of sense detectors that enable you to experience the virtual world in real-time.

The best example of fully-immersive VR is car racing, where all the players seem like they are actually playing against each other and interacting with a simulated environment.

As its name suggests, the semi-immersive VR is something that provides an experience between the fully-immersive and non-immersive VR. It only provides a visual experience, not any physical sensation, using VR glasses or a computer screen. You can just move around the computer-generated environment and cannot experience it physically.

The perfect example of semi-immersive VR is a visual tour, which can be web-based or device-based. More specifically, the primary use of this type of VR is for training and educational purposes. The flight simulator, as discussed earlier, is one of the best examples of semi-immersive VR.

What Technology Does Virtual Reality Leverage?

The primary hardware component is a headset, and other accessories include monitor controllers, trackers, gloves, and a mouse.

A headset is a head-mounted device (HMD), such as a VR helmet or VR Google, which is a digital screen or display. It typically consists of cameras, head or eye-tracking sensors, and sound-tracking sensors.

In general, there are three types of headsets: PC-based, standalone, and mobile.

Some other hardware accessories that improve the experience of VR are as follows:

This device makes it possible for users to move in a 3D virtual environment. It is a control and pointing device that leverages several methods to control 3D movements, including multi-axis sensors, accelerometers, lights, and IR sensors.

Wired gloves, also known as cyber gloves or data gloves, are accessories that users wear like gloves on their hands. A wired glove acts as an input device for computer systems that enables the interaction of humans with computers.

Generally, wired gloves consist of various sensor technologies that capture the movement of fingers, for instance, bending of fingers. They often come with a motion tracker to keep track of the global rotational or positional data. In addition, wired gloves comprise software to interpret the movements of the glove, and gestures are used to categorize these movements into useful information.

They are the systems that leverage visual information to track a user’s position. This can be achieved in a number of ways. However, the typical approach used in the VR system is using one or more video cameras to keep an eye on the user or object’s position.

ODTs enable users to move physically in any direction so that they can fully immerse into the virtual environment and experience something real. Unlike traditional treadmills, ODTs let you move in all directions, including backward, forward, left, and right. Instead of button presses, ODTs use your natural body movements to perform actions in the simulated environment.

Smelling devices have made the VR experience even more immersive and realistic. They are the cutting-edge accessories that uplift the experience of VR. Smelling devices make it possible to add scent to any VR headset based on the actions taking place in a virtual environment.

Without software, it would not have been possible to experience non-existed and unreal things or events. Developers leverage various types of software to develop VR, including training simulators, game engines, virtualization software, VR software development kit, and social platforms.

VR software development kit (SDK) is the essential software that serves as a base for designing, building, and testing VR experiences.

Since VR is used for a wide variety of purposes, we can categorize VR software based on these purposes as follows:

VR has become a cornerstone technology for many industry verticals, from medicine and education to travel and businesses. The following are some of the top use cases of VR:

One of the most typical use cases of VR is in employee training. For training purposes, there is a requirement for a VR headset. More interesting, you can carry out training on-site or at home, as per the employee’s comfort level.

Besides employee training, the application of VR is in education. VR makes it easy for students to learn any subject immersively and interestingly. Also, students can take advantage of field trips through VR.

Want to experience a specific place before visiting it? Wish to experience expensive and luxurious hotels or restaurants? VR has made it possible. You can experience any place, restaurant, hotel, and landmark with guided visual tours before you plan your next vacation. When you visit that place, you will not be disappointed, as you know what it looks like or what it entails.

VR plays a vital role in healthcare. Researchers and practitioners can benefit a lot from VR as they can pursue training in a simulated environment that seems real. Also, they can practice in that environment without being in the middle of an emergency. In addition, VR is significantly helping patients suffering from anxiety, phobia, or anorexia to work with their issues.

It was one of the first industry verticals to leverage VR technology. Today, it is a sector that strongly relies on VR to provide people with amazing entertainment experiences. In theatres and theme parks, there is an existence of VR to simulate movie-like adventures, and people have the choice of experiencing their favorite cinematographic shows.

Moreover, VR has completely changed the way of playing games. With VR, players can completely immerse themselves in a computer-generated environment and play as if they are the real characters of the gameplay.

VR has significantly made its place in the automotive industry. Most car manufacturers leverage VR to create a simulated environment to analyze the behavior of new cars and make the changes accordingly.

Another use of VR in automotive is for the development of smart cars. In conjunction with artificial intelligence (AI), VR helps smart cars learn how to drive, take turns, or stop based on traffic and road conditions.

Also, architects can pay attention to every intricate detail at a very early stage of design. If any design is not in favor, you can immediately make changes.

Apart from these industry verticals, there are many others that have actively adopted VR technology. These sectors include digital marketing, art, social science and psychology, fashion, and manufacturing, and the list is endless.

Advantages and Disadvantages of Virtual Reality

Let us now shed light on some remarkable advantages and disadvantages of VR.

VR makes it possible and simple for people whose workplaces are hazardous to pursue the training. Pilots, doctors, aerospace engineers, and others benefit greatly from VR because it allows them to train in a virtual environment, saving them from unexpected events during training. Furthermore, VR provides an immersive experience, allowing learners to become proficient sooner.

VR has improved remote communication, allowing people to communicate effectively as if they are in the same room. The current COVID-19 has forced people to work from remote locations. However, VR has made video conferencing more effective, allowing business experts to present data in multi-dimensional models.

Though VR has multiple advantages, it comes with some drawbacks as well.

It is not affordable for everyone to leverage VR systems since they are highly expensive. As they offer real experiences through a simulated environment generated using many hardware components and software, they tend to be costly.

As discussed above, VR offers better and more immersive experiences than reality. Many individuals may get addicted to the virtual environment, especially when it comes to video games and social media.

The high use of VR may result in health issues, including the loss of spatial awareness, dizziness, nausea, and simulator sickness.

When you highly rely on VR for almost everything possible, you lose your social connections.

This brings us to the end of our discussion on virtual reality. It is a cutting-edge technology with its own set of pros and cons. It has made it possible for humans to experience unreal and non-existent things through a virtual environment. Also, because VR technology is still in its initial stages, we can expect a slew of new inventions to emerge. Though it has numerous advantages, using it to a certain extent is advantageous.

Hopefully, this blog post has provided you with sufficient information about virtual reality. Still, if you have any questions, feel free to share them in the comments section.

Yes, you can use the VR headset with glasses on your eyes.