How to run MySQL in Docker Containers? 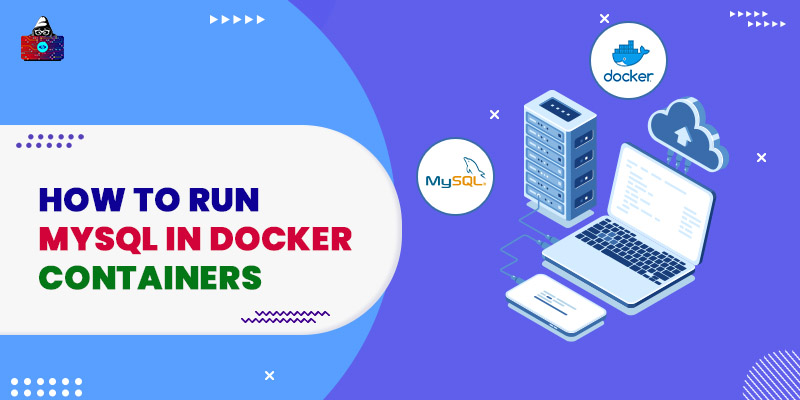 With the recent boom in containerization technologies, developers and organizations are trying to shift their entire technological stacks to containers. Be it microservices architecture or monolithic architecture, containers can fit in all of them.

Exposing ports will allow your containers to communicate and share information with each other. And when we speak about containers, Docker is the first thing that comes to our minds.

Docker is a popular open-source container management platform that allows us to create an isolated and packaged environment with libraries, packages, dependencies, binaries, config files, etc. all pre-installed in it. We can leverage Dockerfiles and Docker registries to create and pull images.

Also, Docker provides tons of pre-built official and vendor-specific images that can be pulled directly from Docker’s official registry called Dockerhub. Some of them are OS instances such as Ubuntu, CentOS, Fedora, etc., databases such as MongoDB, MySQL, etc., and programming language images such as Python, Java, PHP, etc.

We can use these images to create environments quickly without having to go through the hassles of installing packages or virtual environments. However, working with these containers is an art in itself. Once you get yourself started by pulling or building images and containers, the rest is just a piece of cake.

In this article, we will discuss how to run one of the most popular database servers called MySQL inside Docker containers. MySQL is an open-source, free-to-access, relational database server, which helps us to store, structure, and organize data ensuring accessibility.

If we want to quickly set up MySQL without eating up too many resources, hosting MySQL in Docker containers is the best solution. We will see how to pull the MySQL image, create containers, and access MySQL inside it.

To start with, you must have access to a Linux machine with Docker installed inside it and you should also have access to Sudo privileges. So without any further ado, let’s get started.

The first step to creating a MySQL container is to pull the MySQL Server image from Dockerhub. To do so, we will use the Docker pull command. Please make sure you are logged in to Dockerhub through your command line to pull images.

Here, we will pull the mysql-server image from the MySQL repository with the latest tag.

When you execute the pull command, the Docker daemon will first compare the digest of this image with all the images in your local machine. If it finds a match, then it won’t pull the image, as that would be redundant. If the image does not already exist, it will start pulling it from Dockerhub.

Here, we will use the Docker run command to run a container associated with our MySQL Server image.

Here, we have used the following options.

Here, you can see that after executing the Docker run command, the daemon starts the MySQL starts, initializes the database, creates a root server, exposes ports, and is now ready for connection. At this point, we keep this container running inside this terminal and start a new terminal.

Now that our MySQL Server is actively running inside the container, keeping this container running, we will start a new terminal. Inside this terminal, we will run the Docker execute command to run the MySQL command inside the terminal.

In the above command, the Docker exec command is used to run commands inside containers that are actively running or running in detached or background mode. We have used the -it options to access the MySQL command-line client and interact with it. Also, we have mentioned the MySQL command that we want to run inside the container.

Along with it, we have specified the -u option along with the name of the user which is the root, and the -p option which will generate a prompt asking us to input the password.

After you have entered the password which you mentioned in the Docker run command, you will now be able to get hold of the MySQL client and execute commands inside it. This method is useful if you want to run the MySQL server on the same machine as the one where you want to access the MySQL client.

You can also create a MySQL container in another server, run the container in the background or detached mode, and access the server using the client on another machine. This is very useful in the microservices architecture.

We hope that using this article, you will be able to get hands-on with running MySQL inside Docker containers.