There are Docker commands that can be used to manage containers, images, networks, and various other objects. These are single Docker objects and are relatively easy to manage. However, in a microservices architecture, even a single application contains hundreds of containers/nodes/servers that must communicate with one another on a single network. Now, Checkout these best docker-compose commands with this blog post. Although Docker has provided us with technologies like Docker Networks and Swarms, there’s still a missing element that should allow users to run multi-container applications with ease and dynamically manage these containers within a single framework. This is where Docker Compose comes in.

What is Docker Compose?

Docker-compose allows us to bootstrap complex multi-container applications, maintain their dependencies, create a network of these containers, and even scale the whole application to as many containers as we want. Compose is a Docker module that allows us to define and run multi-container Docker applications. We can customize our application's resources allotment with a Compose file using a YAML format. Then, we can build and start all of the resources from a single host with a single instruction. To move ahead with this article, you should have a basic understanding of docker and docker-compose and they should be installed in your host machine. We will start with a basic explanation of the docker-compose file and explain each of the Docker Compose commands with a hands-on example.

What is a docker-compose file?

Docker Compose files are used to specify instructions and are basically a single docker-compose.yml configuration file. Below is the typical format of a docker-compose.yaml file.

In this example, we will try to build a basic Python web application that runs on Docker Compose. This application will be built with the Python Flask framework and use a Redis Image to keep track of the number of visits to the website. Let’s first create a directory and a file named app.py . This file will contain all the code related to our flask application.

Next, we need to create a requirements.txt file that will include all the modules and packages that we would need to run our application. Here, we only need flask and Redis packages. Hence, we define these inside the file. In our application, we have used the Redis module which is used to connect with the Redis database service. It has a hostname called redis and runs on its default port which is 6379. Next, we can move ahead and create a dockerfile for our flask application. There, we can specify the dependencies and other configurations.

Here, we have defined two services called web and redis.

Here you will get step by step Docker Compose Commands

The docker-compose.yml file is used to create images with the help of instructions provided inside it. Let’s look at the general syntax of the docker-compose build command.

Let’s try to execute the build command on our application. 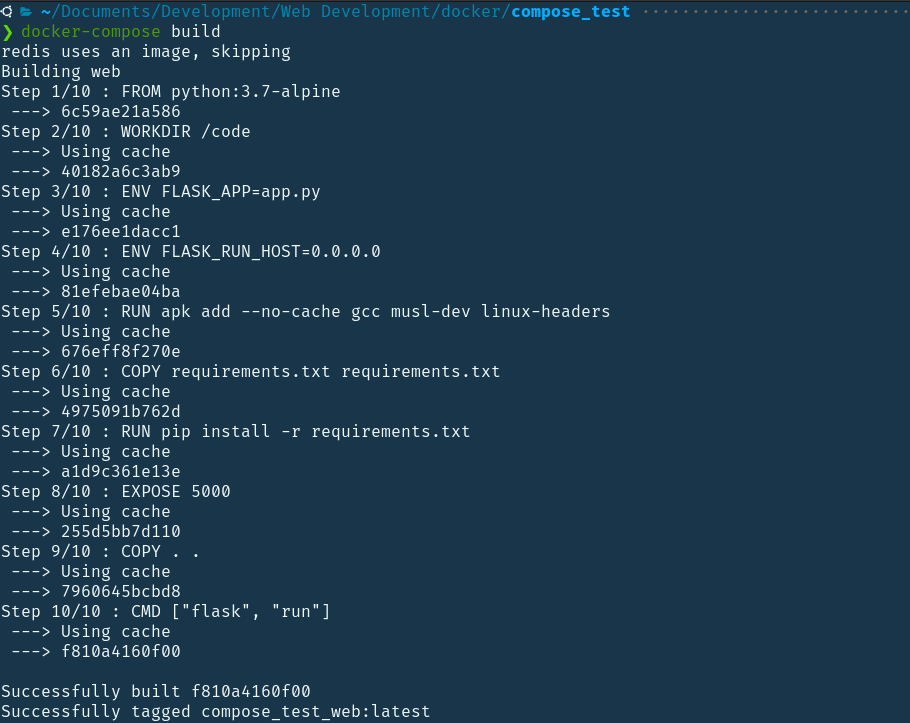 It used the dockerfile to build the web image. Here, it used the cached base image of python which already existed on the machine. As redis did not have any docker file, it just pulled it as a base image. After the services are created, it is tagged as web_service. Options

It works in the same way as the docker run command. It'll create containers associated with those images that are mentioned in the services inside the compose file.

Let’s try to run our compose using the following command.

As you can see, the web service is actively running and can be accessed at port 5000 in the localhost.

Let’s use this command for our application.

This command created two services web and redis. The numerical value after the service name specifies how many containers or services were created. This can be manipulated using the --scale option. Before running the services, if the image is not available in the local machine, it pulls it from the registry. When we navigate to localhost:5000, we can see the application successfully running.

When we use the --build option, it will rebuild the web service image from the dockerfile. Then, it starts the services. 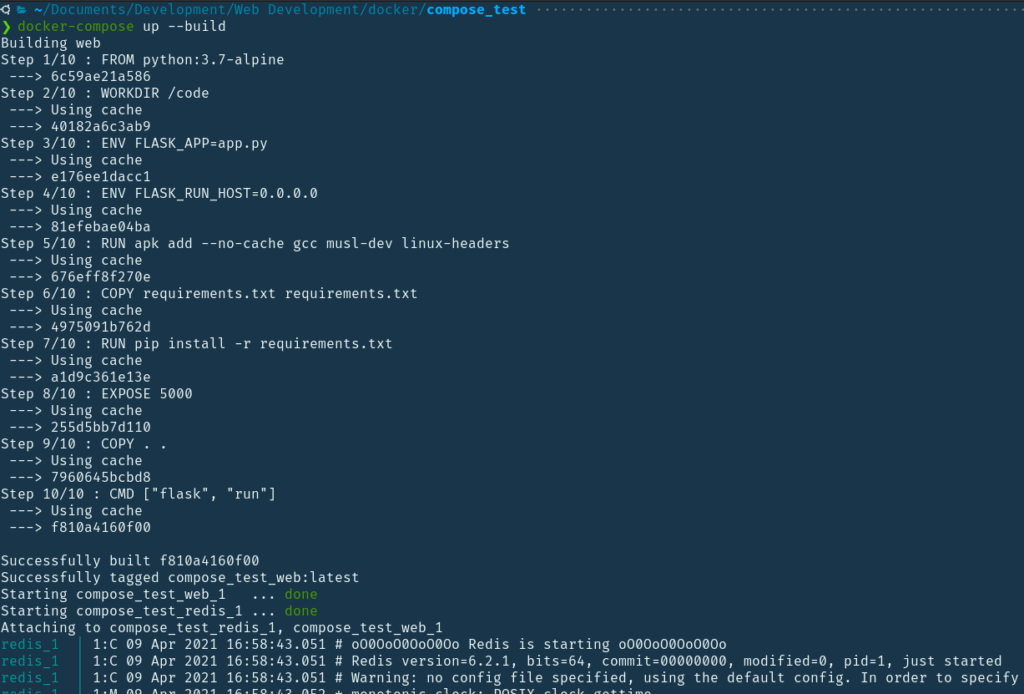 The detached (-d) option is used to run the services in the background mode.

We can use the scale option to spin up as many services as we want, Here, we have used 4 redis services namely redis_1 to redis_4.

In the previous example, we ran 4 redis services . So, you can see that all four of them have been listed here. Options

This command is used to save the current state, and pause all the containers. The “docker-compose unpause” can be used to unpause the containers and start them again.

It is used to stop all the containers, networks, services, and images that were generated by the docker-compose up command.

The networks and volumes defined as external are never removed. Anonymous volumes are not removed by default. However, as they don’t have a stable name, they will not be automatically mounted by a subsequent up command. For data that needs to be persisted between updates, we can use the host or named volumes. Let’s use this command for our own application.

You can see that we had 5 containers running previously. Four of the redis services and 1 for the web. We can notice that the docker-compose down command first stops the services and then it removes it. It also removed the default network or the bridge between the two services.

This command is used to stream container events for all containers.

In this article, we started with a basic introduction to Docker Compose. As it becomes extremely difficult to use traditional Docker to manage multi-container applications, we leveraged docker-compose to do so. Moving ahead, we discussed how to create a multi-service application using docker-compose file. We created a simple Flask application with a Redis database. Using this example, we explained the docker-compose file structure and all the important docker compose commands. We certainly hope that you now have an in-depth understanding of how docker-compose works and how to scale up the services using it. Happy Learning!