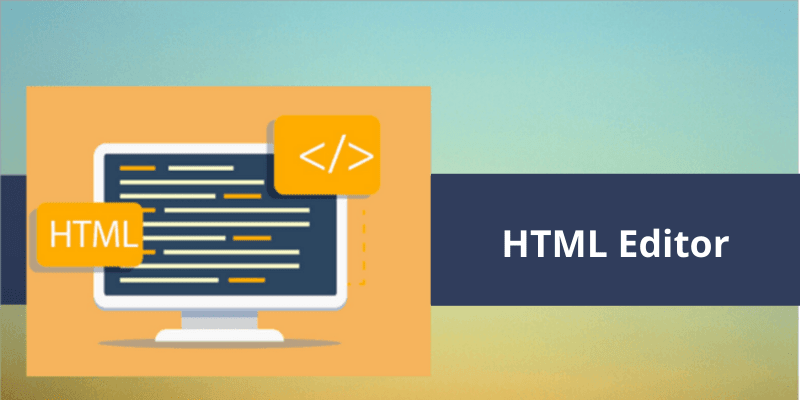 The first tool you need to learn HTML is a text editor, on which you can write the HTML code and create HTML documents or files. Every operating system comes with an inbuilt text editor software, in windows we have the notepad, and in Mac and Linux based operating systems we have TextEdit. <Note> Never use WordPad or Word to edit or create HTML documents.

However, you can use notepad to create and edit HTML documents, but we recommend to install an open-source editor. There are many free to use text-editor software present on the internet, which provides a better interactive User interface and some add-on functionality which you miss on a notepad. Here is the list of top 4 HTML text editors you can pick:

It is the most popular text editor, which is free to download. It is developed by a Sydney-based company, and it also comes with a premium version. The free version of Sublime text provides enough features for HTML, but if you want to use it to its full extent, you can buy the premium version. We recommend you to stay with the free version because it is enough to serve your purpose of learning and writing HTML.

Notepad++ is also free to use text editor, and it is the best text lightweight text editor software you can find on the internet. This text editor is only available for window operating system, so if you are on Mac or Linux, then you are not able to download it. Like other text editor’s notepad++ provide you with many features such as code highlighting, auto-indentation, syntax highlighting, open multiple files on a single window, quick editing with find and replace option, run file from the editor, and so more.

Visual Code Editor is developed by Microsoft, and it is available for all the popular operating, which include Mac and Linux. The size of the software varies from OS to OS, and it is available in various languages. Visual Code editor provide far better and more features than sublime and nodepad++ combine, and it comes with a myriad of plug-ins which can be added to the editor to increase the developer productivity.

Atom is an open-source text editor developed by GitHub, and it is available for all the popular operating systems. It comes with an inbuilt Git control version and gives direct support for git hub repository. If you are not a Microsoft fan, then you can probably choose Atom over Visual Code Editor. The Size of Atom varies from 87 t0 180 MB. Write HTML code Once you have downloaded the text editor, you can write HTML code. Make sure that you save the file with .html extension so that browser could interpret the file as an HTML document.

Save the File After writing the code, save the file name with .html extension. You can give any name to your file, but it should end with .html. Run the file on the browser After saving the file, you can double click on the file to execute it. In the text editor, you also get an option to run the file, which allows you to run the file directly from Code editor.