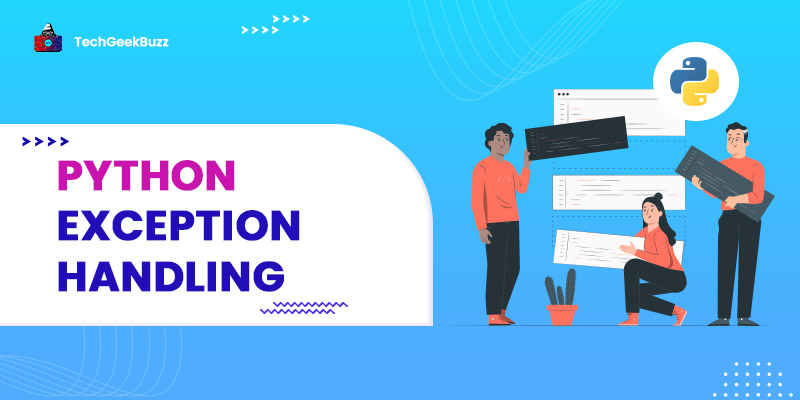 Every programming language has its own way of dealing with errors and exceptions. It is called exception handling.

In this tutorial, we will discuss Python exception handling. We will explain how to tackle if any exception occurs in a Python program. We will also learn all the ways to handle exceptions in Python, namely try, except, and finally.

Exceptions are the unexpected errors that occur in the program at the time of execution. Exception handling is a mechanism that detects the exceptions in the code and separates them from the rest of the code, so the program execution does not come to a halt. In Python, we can use try, except, and final statements to handle the exceptions.

If there is no exception in the try block, then the except block won’t execute. try….except Syntax

Here, in the above example, when i iterates through the list [2,1,0,3] and when its value becomes 0, it divides 2. Thus, this raises a ZeroDivisionError, and so the except block gets executed.

We can pass some specific kind of error along the except statement so that it only gets executed when the try block throws that same error. We use tuple and set errors as its elements when we want to specify more than one error with the except method.

In Python, we have the raise keyword that is used to create an error. We can also pass a message along with the error so the user can understand why specifically this error is raised. Syntax

With the try and except statements, we can also add a finally statement. The code inside the finally block will execute in every case, no matter whether the try or except statements execute or not. finally Syntax:

That was all about exception handling in Python. An exception is an error in code that has the potential to halt program execution. With exception handling, we can ensure that our program runs correctly even when it comes across an exception.
Previous Tutorial Next Tutorial