10 Best CSS Editors to Use for Web Development in 2022 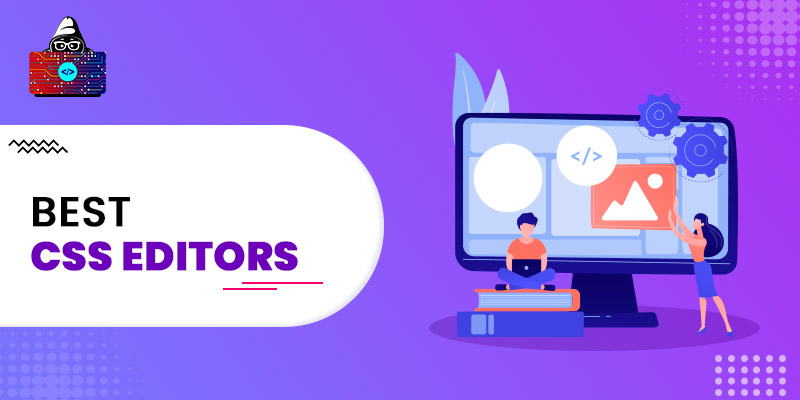 Cascading Style Sheets (CSS) is a design language used popularly for describing the appearance or presentation of a document drafted in a makeup language, like HTML. CSS helps us to style a web page or enhance the appearance of HTML elements on a web page.

With CSS, we can decide the text color, font styles, layout design, background images, effects and animations, spacing between paragraphs, etc. CSS, along with HTML and JavaScript, is a crucial technology extensively used for developing websites and web apps.

This article will introduce you to what exactly a CSS editor is. Also, you will understand the critical difference between open-source and free CSS editors. Finally, we will walk you through some of the popular CSS editors for Windows and Mac systems. So, let us get started!

What is a CSS Editor?

An application or software used to edit or manipulate any CSS file is called a CSS editor. A wide variety of CSS editors are available today, such as online editors, commercial editors, visual style editors, and free editors. CSS editors offer numerous benefits and features, like syntax highlighting, auto-completion, live preview, and validation to help web designers write CSS code efficiently and coherently. Also, most editors can effortlessly address typos and errors in the code.

Open-source or Free Editor - Which to Pick?

Many people get confused that open-source and free editors are the same. However, they are not entirely analogous to each other. The significant difference between the two is that open-source editors enable us to download and manipulate their source code, whereas free editors don’t. Below are some of the key reasons why to pick an open-source CSS editor.

Open-source CSS editors help multiple members of a team to collaborate, as there is no need to purchase licenses. They do not restrict the number of users to join unlike trial or premium editors.

One of the finest benefits of open-source editors is that they are customizable. Users can easily customize an editor depending upon their project’s requirements and scope.

Many open-source CSS editors have active and robust community support. Therefore, if users encounter any issues, they can get help from experienced developers present in the community.

Choosing the best CSS editor can be a challenge considering the huge number of editors out there. However, to make it easier for you to pick the ideal one, we have listed the 10 best CSS editors. Some of the below CSS editors are free and open-source while some require you to purchase a license.

After reading their features and pricing plans, you can pick the best CSS editor according to your requirements.

Sublime Text is one of the most sophisticated CSS editors in the market today. It is a commercial editor licensed under Shareware, supporting a broad spectrum of markup and programming languages. In addition, it is available for Linux, Windows, and macOS.

Pricing You can download Sublime Text for free. But you require a license to use it. There are two different Sublime Text licenses - one for individuals and the other for organizations. The individual license costs $99 while the Sublime Merge License costs $168.

Atom is a popular code editor developed by GitHub. It is based on a robust framework called Electron, which is developed using Less, CoffeeScript, and JavaScript languages. Atom is one of the finest and extensively used free and open-source CSS editors.

Licensed under the MIT license, Atom is compatible with Linux, macOS, and Windows. It also supports plug-ins scripted in JavaScript .

Pricing Atom is free to use.

Brackets is another open-source yet powerful CSS editor. Adobe Systems created Brackets, and it is available under the MIT license. This CSS editor is well-known for its live JavaScript, CSS, and HTML editing feature and is available in 38 languages.

In addition, this cross-platform editor is available for macOS, Linux, and Windows operating systems. It is a lightweight, cutting-edge CSS editor that supports preprocessors and visual tools.

Espresso is the best CSS editor and web editor for Mac Systems. It is specially designed for developers wishing to create responsive and functional websites. It supports macOS 10.13 and higher versions. Developed initially by MacRabbit, Espresso is now owned by Werewolf. It allows developers to work on web development projects from scratch or tweak live websites.

Pricing Espresso comes with two pricing plans - Education and Volume. For the education plan, they offer a 50% discount to students and teachers. You just need to send them an email from your school email address or send a document copy acknowledging that you are a student or a teacher. On the other hand, for the Volume plan, you need to pay $116.82 including GST for a single license.

Notepad++ is a popular source-code editor that supports CSS, and it is specially designed for Microsoft Windows. In addition, it is available in 90 distinct languages.

Developed by Don Ho, Notepad++ was released on SourceForge in November 2013. Notepad++ is created using the C++ language and is based on the robust editing element called Scintilla.

Pricing Notepad++ is available for free.

Komodo Edit is yet another free, open-source, and robust CSS editor. It is an original product of ActiveState and supports various operating systems, like Windows, CentOS, Ubuntu, SUSE Linux Enterprise, Fedora, and macOS. Initially, Komodo Edit was only a free product, but later, ActiveState Inc. made it open-source.

Pricing Visual Studio Code is free to download and use.

Bluefish is a robust and free CSS text editor, designed to work on several operating systems, including macOS, Windows, FreeBSD, Solaris, OpenBSD, and Linux. It is a free text editor developed in the C language and licensed under the GPL license.

It is compatible with various operating systems, such as macOS 10.16 or later, Windows NT and higher versions, MorphOS, and Unix-like systems.

Stylizer is a commercial CSS editor specially developed for Windows and macOS operating systems. It supports macOS 10.9 or higher and Windows 7 or later versions.

Pricing The latest version of Stylize is 7 and is available at a one-time license purchase of $79. In addition, it also offers a 30-day money-back guarantee.

A CSS editor helps web designers and web developers write code quickly without errors or typos. Most CSS editors offer features like auto-completion, code folding, and syntax highlighting to help developers write robust code. In this article, we have introduced you to some of the most popular CSS editors.

In our list, only Sublime Text, Espresso, and Scintilla are premium or paid CSS editors. On the other hand, some text editors are free and open-source, whereas the remaining are only free to use. Try to understand the benefits of open-source CSS editors and choose from them if possible. Nonetheless, you can choose the one that is ideal for you depending on your project requirements.