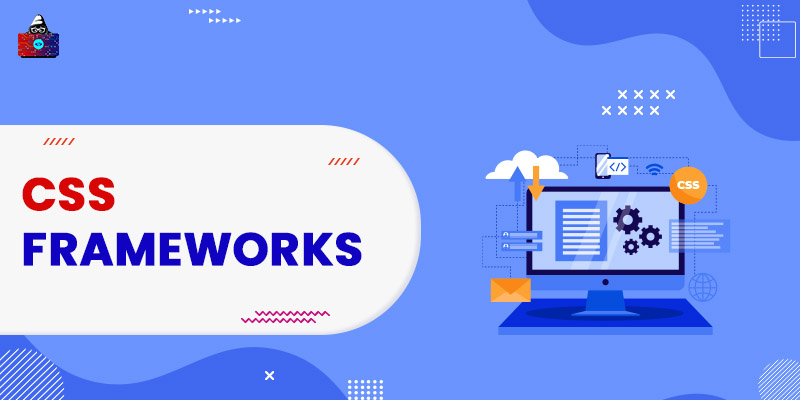 We can build a responsive website or webpage using only HTML and CSS that look good on every web browser and screen size. There are two approaches to using CSS for a responsive website. Either we can write complete CSS code from scratch or just use one of the best CSS frameworks.

There are lots of properties and values along with the rules and media queries in CSS, and you have to use all these tools to make a responsive web page. Instead of writing code from scratch, we can simply use a CSS framework and its pre-defined classes and ids and save a lot of time.

A CSS framework is a collection of pre-written CSS code that makes web designing more accessible, faster, and responsive. Mostly all the CSS frameworks come with a grid system, which divides the complete web page into multiple grids so that the different components of the webpage can be placed in proper areas or grids.

Many powerful CSS frameworks also use JavaScript for more functionalities and a better UI design. However, many CSS frameworks are purely written in CSS without using JavaScript and jQuery . We can either download a CSS framework or its package in our local system or directly link to its official URL.

With CSS frameworks, we adhere to the idea of why to write code again and again if it has already been written for us.

Here are Some Good Reasons to Use a CSS Framework

For a front-end developer, learning a CSS framework is very important because, in many CSS interviews , the interviewer asks questions about the popular CSS frameworks.

The following is our list of the top 10 CSS frameworks that are widely used by front-end developers and web developers:

Bootstrap is the most popular and widely used CSS framework, and it has the highest number of stars on GitHub. In the past few years, Bootstrap has gained too much popularity among front-end developers. Apart from CSS, it also uses HTML and JavaScript for developing beautiful and interactive user interfaces. The latest version of Bootstrap is bootstrap 5, which was released in May 2021.

Bootstrap5 offers many new features, such as a new color scheme, modifiers, and utility classes. Apart from these new features, Bootstrap also offers all the common website components, including navbars, dropdown menus, pagination, forms, tooltips, and breadcrumbs. Thus, with this CSS framework, front-end developers do not need to write code for the basic components.

Foundation is one of the most popular CSS frameworks, and it is pretty similar to Bootstrap. It blends HTML and CSS perfectly to provide a beautiful and responsive user interface. Developed as a ZURB’s project for the better designing of front-end code, Foundation is considered more sophisticated than Bootstrap because of its flexible and customizable nature. Foundation is an advanced CSS framework. Thus, a beginner could find it difficult to use.

The CSS framework also uses the grid approach for setting the different components and layout of a web page, and like Bootstrap, it comes with ready-to-use components like forms, buttons, tooltips, badges, and navigation bars. It has been tested on many web browsers, including mobile browsers, and made sure that its code does not break on any device.

Bulma is another popular and powerful CSS framework. It has more than 41k stars on GitHub, which is more than Foundation. This shows the popularity of Bulma among web developers and designers. Bulma uses the flexbox layout for creating responsive and modern websites. Like Bootstrap and Foundation, Bulma comes with many predefined CSS classes and ids for common components like buttons, columns, forms, tooltip, and so on.

This framework is completely written in CSS, and it does not use any JavaScript. Still, Bulma is capable of creating beautiful and robust UIs. As it uses CSS, web designers and developers can easily provide a custom look to their websites by modifying the classes and variables. With this customizable feature, developers do not have to worry about the same-looking websites.

Semantic UI is an advanced CSS framework that uses JavaScript along with jQuery. It is mostly used for designing modern and advanced website themes. It is highly compatible with popular front-end frameworks , such as React, Angular, Ember, and Meteor, which allow developers to build dynamic and interactive user interfaces for multiple devices.

Apart from its overall complex structure and high learning curve, Semantic UI has tried to provide concise HTML and CSS classes using natural languages so that it could become a comparatively less complex framework for CSS. Semantic UI has an actively growing community that keeps contributing to its development. Currently, there are more than 3,000 themes made using Semantic UI.

Pure is one of the best lightweight CSS frameworks. It is a perfect framework for creating responsive web pages that also look good on mobile devices. The complete pure module zipped file is less than 5KB, and it is highly recommended for small websites and web applications containing 4 to 5 pages.

Like Bootstrap and Foundation, Pure also uses the grid system and comes with built-in common components like forms, buttons, tables, menus, and bases. If you are creating a single-page web application, such as a to-do app, counter app, or notes app, then Pure would be a great choice because it contains only that CSS that loads fast in the web browser.

Materialize CSS is a modern CSS framework that does all the heavy lifting for front-end developers and provides them with a responsive design component. Google developed it in 2014, and it mainly focuses on responsive web design that looks perfect on Android and desktop-based browsers. It boasts custom components, animation, and transition tools for a better and smoother developer experience.

This framework contains a wide range of color schemes that helps developers to build distinct websites. Like other CSS frameworks, it also includes many built-in components so that the developer does not have to write code from scratch.

Skeleton is a very small and responsive CSS framework. It is a pure CSS framework and contains only two CSS files, namely normalize.css and skeleton.css. It is so small that even its complete documentation is a single page. Its core developers endorse it as a “light as a feather framework,” which is also true because the complete skeleton CSS code is around 400 lines.

The popular CSS framework helps in creating responsive websites that are also mobile-friendly. Despite its small size, Skeleton offers all the common components for responsive web designing, including grids. Similar to Bootstrap and Foundation, Skeleton divides the complete web page into multiple grids with 12 columns. It is ideal to use for creating small websites and single-page web apps.

UI Kit is another lightweight and responsive CSS framework. Designed for developing a fast and powerful UI with minimal complexity, it comes with a perfect blend of HTML, CSS, and JavaScript and provides a wide range of predefined components. It is easy to learn and often used to design UI for iOS and Android-based web applications. In its predefined components, UI Kit also provides SVG icons, animations, and parallax for a better and smoother user experience.

With this, we have reached the end of our article on the best CSS frameworks to use in 2022. Here, we have listed all the top CSS frameworks according to their popularity and usage among the web development community. All the frameworks we have mentioned above have huge community support and wide adoption.

If you are thinking of learning CSS, then you can go with one or more of these CSS frameworks. If you use a CSS framework other than the ones mentioned above, do let us know in the comments section.

To gain a deeper insight into the CSS world, buy this course .

CSS frameworks not in save time in writing the source code but also offers many other benefits. These benefits include cross-browser compatibility, excellent web design practices, high productivity, a symmetrical layout, and maintainable styling.

A CSS framework is a collection of pre-written or pre-coded CSS stylesheets that you can use to design websites quickly and easily.

The choice of the CCSS framework entirely depends on personal preference and project requirements. Bootstrap, however, is one of the most widely used CSS frameworks.