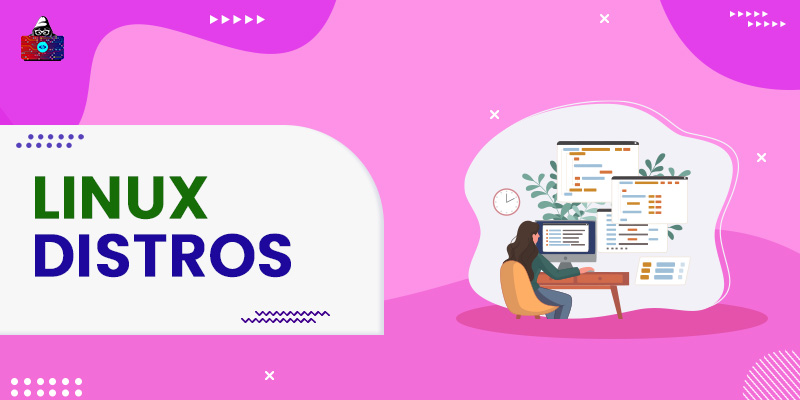 If you want, you can also develop your own Linux OS. As the kernel code is freely available under an open-source license, you can, therefore, write your own programs and create your own packages to build a specific Linux-based operating system.

Needless to say that doing the aforementioned demands a lot of time and effort, and you should also have a deep knowledge of Linux. So, rather than creating your own Linux OS, you can simply download a Linux distro.

Now, the question is, "Which Linux distribution to use?" That is precisely what we are going to cover in this post.

What is a Linux Distribution?

There are many Linux-based operating systems, such as Debian, Linux Mint, Ubuntu, and Fedora . Whether it's Ubuntu users or Linux Mint users, they say that they are using the Linux operating system. However, technically, they use the Linux kernel paired with different programs and packages. Hence, you should not confuse these Linux distros as the different versions of Linux because they are not.

Let's compare Linux with the Windows operating system. Owned by Microsoft, and all of the programs and packages for Windows are built by Microsoft itself. Also, the source code of Windows is available to Microsoft authorized developers, so a normal user does not have any control over the Windows kernel.

This, however, is not the case in Linux, where different organizations have developed separate parts of Linux and everyone is free to use the Linux kernel in order to build their own Linux operating system.

What Makes a Linux Distribution?

Hence, we can define a Linux distribution as the composition of different applications and utility software, such as GNU tools and libraries, combined together with the Linux kernel so that it could form a complete operating system that can meet the specific needs of users.

There are hundreds of Linux distributions with different features and most of them are free. This is one of the most important reasons why Linux is treated as one of the best operating systems.

For developers, it's always suggested that if you cannot afford a Mac then go for Linux. Linux distributions, mostly, are designed to meet different user requirements. For example, Ubuntu is developed for beginner Linux users while Arch Linux is designed for users who enjoy working on the terminal.

Here we have compiled a list of the top 10 Linux distributions that are popular in the market. Have a quick look at our picks:

Each of these Linux distributions is detailed down below, starting with Ubuntu:

Introduced in 2004 by Canonical, Ubuntu was designed for newcomers i.e. users using Linux for the first time. As such, Ubuntu is designed with an intuitive graphical interface and can work even without the command line. Ubuntu is an open-source Linux operating system and gets regular updates every 6 months. Thus, users need not concern too much about system security and privacy.

In October 2020, Ubuntu released 20.10 "Groovy Gorilla," the latest non-LTS Ubuntu. For now, Ubuntu is available for desktop, server, and cloud but its developers are also planning to release the popular Linux distro for smart devices, like smartwatches and mobile devices.

It is an Elegant GUI-focused Linux distribution ideal for new Linux users who have recently switched to Linux from macOS or Windows. Linux Mint comes with LibreOffice and also provides support for proprietary media formats, which allow playing videos, DVDs, and music files.

The latest edition of Linux Mint is 20.1, codenamed Ulyssa. Anyways, the Linux distro offers you 3 different editions to start ASAP; Cinnamon, Mate, and Xfce, and out of the trio, Cinnamon are the most popular.

Originally, Mint was built on top of Ubuntu, that's why Mint uses many of its software repositories. This is the same reason why most of the packages are similar in both the Linux operating systems. Nonetheless, Linux Mint now has some new repositories and unlike Ubuntu, it does not compel you to download the critical software updates.

This popular Linux distribution comes in 2 editions; CentOS Linux and CentOS Stream. However, as CentOS is popular for server usage, it is not so great option as a desktop operating system. CentOS Linux is a rebuild of the freely available sources for Red Hat Enterprise Linux (RHEL). CentOS Stream is a midstream distribution that provides a cleared path for participation in creating the next version of RHEL.

This Linux distribution is designed for developers and system administrators . That’s why it offers a lot of security packages. openSUSE offers two distros; openSUSE Leap and openSUSE Tumbleweed.

The Leap distro is built on top of SUSE Linux Enterprise and provides more stability. Every year, you get a new version with 3 years of official support. The Tumbleweed distro is based on the openSUSE’s main development codebase and its updates are available for download as soon as the developers of openSUSE test the updates. This is why with Tumbleweed, you get the latest updates of openSUSE.

It is a lightweight Linux distro often used by professional developers who like to work with the command line. Arch Linux does not provide that much of a graphical user interface and if you want to interact with this operating system you need to write commands. Even for installing or uninstalling an application, you have to use terminal commands.

Though if you know how to write Linux commands , you can also customize Arch Linux according to your will. Here, you get many options to customize the complete operating system. This Linux-based operating system comes in handy for developers who do not want other unnecessary packages to occupy the system memory.

Unlike other Linux-based operating systems, such as Ubuntu and Linux Mint, here you do not get complete packages for your OS. Contrarily, in Arch Linux, you have to install packages according to your requirements.

Elementary OS is one of the best Linux distros and resembles, up to some extent, macOS. This operating system is based on Ubuntu, which makes it ideal for non-technical users. Although the source model of Elementary OS is open-source, the organization provides you with some custom modifications at affordable pricing.

If you are looking for a Linux-based operating system that can provide you with high security and fast performance, you can definitely go with Elementary OS. It’s a perfect replacement for macOS and Windows.

Originally, Elementary OS started as a set of themes and applications designed for Ubuntu but later on elementary, Inc. was released as a separate Linux distro. Initially, the Linux distro was based on Ubuntu, which is why it used Ubuntu’s repositories, but later it came in a new version 0.4 “Loki”, which introduced a new Appstore “AppCenter.”

Fedora keeps updating its operating system, which also plays a back-role to its users because fedora gives only 13 months of support for its every new version. But there is a catch in fedora OS. If there is a new version you do have to uninstall the old one in order to install the updated version. This means you can't use two fedora versions, side-by-side.

Based on Debian’s stable branch, Deepin is also known as Linux Deepin and Hiweed Linux. The Linux distro has its own desktop environment called Deepin DE. Deepin DE is written on an open-source widget toolkit known as Qt, which is used to create GUI and cross-platform applications that can run on various operating systems, including Linux, Windows, macOS, and Android.

Arch Linux, which is also one of the popular Linux distros, has included the Deepin Desktop Environment in their packages repository. Deepin provides you with multiple in-built applications built on C++ and Qt. The Linux distro also comes with its own installer, called Deepin Installer. It can install new applications as well as updates for the Linux-based operating system.

Alpine Linux is based on musl (C library used for operating systems based on the Linux kernel) and BusyBox (a software suite that provides Unix utilities). The Linux distribution was designed by keeping simplicity, resource efficiency, and security in mind.

Initially, Alpine started as a fork of the LEAF project, then later the organization continued Alpine as a Linux distro. Alpine Linux comes with its built-in package management system and apk tools. Now, Alpine contains all the popular packages and applications such as GNOME, Xfce, and Firefox.

As its name hints, Kubuntu is based on Ubuntu, and like Ubuntu, it is one of the most widely used Linux distros, but it's always considered a different flavor of Ubuntu, rather than a full-fledged Linux distro.

Widely used by developers, testers, supporters and translators, communities and many developers refer to Kubuntu as a perfect alternative to Windows and macOS. However, Kubuntu is mostly all of the Ubuntu packages and repositories but it uses the KDE Plasma Desktop instead of the GNOME.

Kubuntu comes with preinstalled office, email, graphics, photography, and music applications. There is an advantage of Kubuntu over Ubuntu, and that is that Kubuntu is mobile-ready, which means you can enable easy integration between your desktop and phone or tablet. You just need to install KDE on your Android device and you can connect your mobile with your desktop running Kubuntu.

That sums up the 10 best Linux distributions. You can use the one that best meets all your requirements. To know whether a Linux distro works out well for you or not, there is only the best thing to do, and this is to use it. There are more than 600 Linux distros on the internet and many of those are free to use.

Moreover, if you want, you can install the Linux kernel for free and create your own Linux-based operating system.