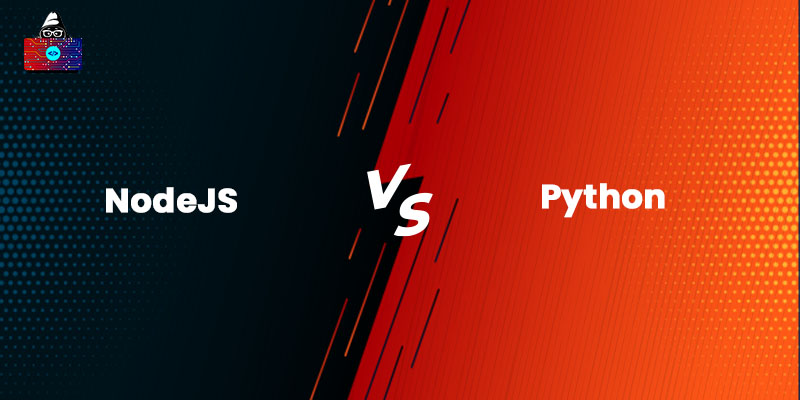 Python is a popularly used backend language, whereas its frameworks are used for front-end development. On the other hand, Node.js is a server-side platform or running environment for the JavaScript language.

This article focuses on highlighting the major differences between Python and Node.js. But before diving deep into the differences, we shall first have an overview of both these back-end technologies.

So, let us begin without further ado.

Node.js is an open-source runtime environment for JavaScript written in C, C++, and JavaScript. It is a cross-platform framework compatible with Windows, macOS, SmartOS, OpenBSD, FreeBSD, z/OS, IBM AIX, and Linux systems. Previously, the Node.js Foundation managed and owned Node.js but later merged with JS Foundation to form OpenJS Foundation.

Ryan Dahl, in 2009, wrote Node.js, and the initial release only supported Linux and macOS systems. It runs on a V8 engine, which is the JavaScript engine of Google Chrome. Node.js allows us to use JavaScript for server-side scripting and for writing command-line tools. The only language Node.js supports natively is JavaScript. With multiple compile-to-JS languages available, it supports writing applications in languages like CoffeeScript, TypeScript, Dart, etc.

Here are some major benefits of Node.js:

The following are the downsides of Node.js:

Python is a general-purpose, open-source, interpreted language developed by Guido van Rossum back in 1991. It is one of the most flexible languages due to its understandable syntax, excellent documentation, and consistent development in libraries. It is an ideal language for data science, artificial intelligence, and machine learning projects.

Licensed under the Python Software Foundation License, Python is a free and open-source language. It follows several programming paradigms, like functional, object-oriented, procedural, reflective, and structured.

Python is developed as a successor of the ABC language and was released initially in 1991 as Python 0.9.0. Today, the latest version of Python is Python 3.9.0. It is a dynamically-typed language, i.e., there is no need to define data types of variables. Also, due to its extensive standard library, it is described as ‘batteries included'.

The benefits of Python are:

The drawbacks of Python are:

Node.js vs Python: A Head-to-Head Comparison

The differences between Node.js and Python back-end technologies are as below:

Python and Node.js are both robust and widely used back-end technologies. Both have unique characteristics, upsides, and downsides. Therefore, it is pretty challenging to say that one technology is better than the other. You can opt for Node.js if your primary focus is on developing web applications. Python can be used for various purposes, like machine learning, data analysis, data visualization, software, web development, etc.

Hopefully, we have covered all the significant differences between Node.js and Python that you are looking for. We recommend you pick the right one depending on your project requirements.

While Node.js is a runtime environment for JavaScript for creating both client and server-side network applications, Python is a high-level, object-oriented programming language.

As Python has a simple and easy-to-learn syntax, it is easier to learn than Node.js.

Since Python is interpreted and single flow, it processes requests much more slowly. So, if your application involves complex calculations and prioritizes speed and performance, Node.js is better than Python.

Yes, you can leverage JavaScript for data science and machine learning using the libraries both at the backend in Nodejs. and in the browser.

Yes, Node.js is faster than Python because it runs on Google Chrome's v8 engine and is a better option for creating real-time applications.