C# vs Python - Which One is the Better Choice? 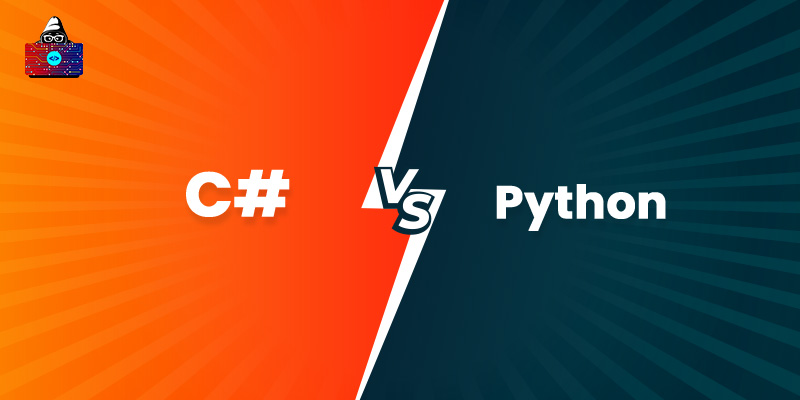 Python and C# both are high-level, object-oriented programming languages. They are easy to learn and code and offer fast development and excellent performance. Python is widely used for web development, software development, data analysis , data visualization, and task automation.

On the other hand, C# is a popular choice for building web applications, desktop applications, and web services. In this article, we shall discuss some significant differences between Python and C#. But before diving deep into the topic, let us get a quick overview of C# and Python languages.

Moreover, the International Standard Organization (ISO) approved it in 2003. The latest version of C# is 9.0, released in 2020 in .NET 5.0. C# is syntactically analogous to Java, and it is easy to learn for those who have strong knowledge of C and C++. Like Java, C# is also a platform-neutral or platform-independent language whose code can be compiled and run on all operating systems. It is commonly used with the Microsoft .NET framework for Windows.

Guido Van Rossum introduced Python 0.9.0 in 1991 as a successor of the ABC language. Later in 2000, Python 2.0 was released with additional features, including a garbage collection system and list comprehensions. Python 3.0, which was released in 2008, is a major revision of the language.

The latest version of Python is 3.9.0. Python is well-known for its code readability feature. Also, it is easy to learn and understand Python as its syntax uses simple English keywords and does not use curly brackets to delimit blocks; it uses whitespace indentation. Another advantage of Python is that it allows developers to write code in a few lines compared to other programming languages.

The below table highlights all the notable differences between C# and Python languages.

Example of Python and C# Programs

Let us write a simple C# program that takes input from the user and displays it with some message on the command prompt.

One more significant difference between the two programming languages is that Python does not require type declarations, i.e., we have not declared ‘String webName’ in Python as we did in C#.

Both Python and C# are general-purpose and object-oriented languages. Python would be a great option if your project is related to data research, as it has a comprehensive standard library. Choosing C# would be beneficial for developing responsive websites, web services, and desktop applications.

The organized structure of C# ensures that there are no inconsistencies in the syntax and formatting rules. On the other hand, you can write Python code faster as it requires fewer lines of code than C#. However, C# can do everything that Python can do and offers better performance. You can use both Python and C# languages with IronPython, which is an open-source implementation of Python and is integrated with the .NET framework.

Both C# and Python are high-level, general-purpose, and easy-to-learn programming languages. While C# is organized and faster at runtime, Python is simple and easy to run that comes with an array of standard libraries. Moreover, C# is much faster than Python as it is a compiled language. Therefore, if speed is your priority, choosing C# would be a great option.

Of course, Python is an easy-to-learn language because of its simple syntax containing English-like keywords. As compared to Python, learning C# takes some time and is difficult to learn.