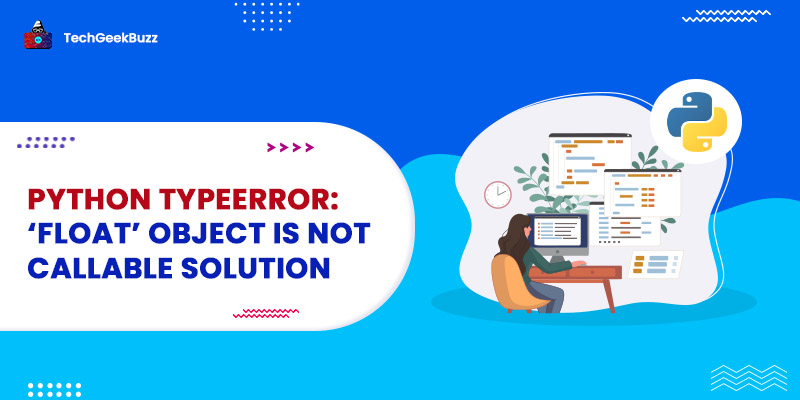 Python supports a distinct data type to store floating points or decimal numbers, and that data type is known as Python float. Floating-point values are the numbers with decimal values, and Float is their data type.

Floating-point values are like other data types present in Python, but they represent decimal numerical values. But if we treat them as a function and call them using parenthesis, we get the TypeError: ‘float’ object is not callable Error.

In this Python tutorial, we will discuss this Python error and learn why it raises and how to solve it. We will also discuss some Python code snippet that causes this error and solve them so that you can have a better understanding of this error. So let's get started with the error itself.

The Python Error TypeError: 'float' object is not callable is divided into two statements, Error Type and Error Message, separated with a colon : .

Float objects are used in Python to store floating-point numbers, but if we call a float variable as a function by putting a parenthesis after its variable name, we receive the TypeError: ‘float’ object is not callable error.

In the above example, we are getting the error because when we put the parenthesis () after a variable name, Python treats it as a function calling statement. But in the above example, my_num it is not a function. It is a float number. That's why Python threw the error 'float' object is not callable , which simply means we can not call the float objects functions.

There are two common major cases when many new Python learners commit the mistake and encounter this error.

In the above example, we are trying to convert the user entered height in inches to feet. But we are receiving the TypeError: 'float' object is not callable error at line 4.

This is because, in line 2, we have defined a variable by name float whose value is 12.0 , that represents the value to convert the inches to feet. But, in line 4, we are using the Python float() function to convert the user input height to a floating-point number.

But now for Python float is not a function anymore. It is a floating-point variable whose value is 12.0. that is defined in line 2. By which it will not call the actual Python inbuilt function float(). Instead, it will call the float variable a function, which will lead to the TypeError: 'float' object is not callable error.

The solution for the above scenario is very simple. All we need to do is change the name of the float variable to something else. This is also very important. While we want to write good code in Python, we never use keywords and function names to define a variable.

But in Python programming, we need to specify the Arithmetic operator between the number and the opening or closing parenthesis; else, we get the error.

for instance (in python)

If we look at the error code statement, we can see that the error occurred on line 7 with the result = a(b+c) statement. This is because we forget to put the * operator after variable a . The Python interpreter mishandles the floating-point variable a with the function calling statement.

The solution to this problem is also very straightforward. All we need to do is place the Arithmetic operator between variable a and ( parenthesis.

In this Python tutorial, we learned what is TypeError: ‘float’ object is not callable error in Python and how to solve it. If we look closely at the error message, we can tell that the error is related to the float and calling a function. The only reason this error occurs is when we write a function calling statement using a Python floating-point variable or value.

If you have a basic knowledge of Python floats and functions, debugging this error would be a piece of cake for you. If you are still getting this error in your Python program, you can share your code in the comment section. We will be happy to help you in debugging.