A Docker image is a read-only template that includes instructions for building a Docker container. It gives you a simple way to package up the application and also provides pre-configured cloud environments that you can share privately or publicly with other Docker users. In this article, we are going to look at some of the most common and useful docker image commands. Before that, we must know how docker creates images and how we can leverage Dockerfiles to create them.

Layering in Docker Images and Dockerfiles

An Image layer is a set of files and metadata bundled and transmitted as a single independent entity. Docker handles each layer as an image internally, and layers are often referred to as intermediate files. You may also use labeling to promote a layer to an image. Most layers are built on top of a parent layer by modifying the parent's filesystem. A Dockerfile is a text file containing instructions that tell Docker how to make a new image. These files are distributed along with applications and it entirely depends upon the author of the image whether or not to embed them in the image.

Here we have highlighted the important docker image commands in tabular which is quite good enough to be familiar with basics.

A Dockerfile and a build context are used by the docker build command to create Docker images. The context of a build is the collection of files in the given PATH or URL. All of the files in the context can be referenced by the daemon process. A COPY command, for example, can be used in your build to refer to a file in the context. Git servers, pre-packaged tarball files, and plain text files are all examples of entities that can be referenced with the URL parameter in the syntax of the Docker build command. Let us create an nginx server using a Dockerfile.

This is a typical format of a docker file and each instruction creates a layer on top of each other to create a final image. Here, Ubuntu is the base or parent image used for running the Nginx web server. Syntax :

As you can see, the image is successfully built and can be used to run a container. Build command has a lot of options you can use to customize your image build. Options

This command is used to see the history of an image build. Syntax :

This lists out the history of intermediate layers while creating the final image. As you can see, there is an intermediate image for every instruction of the dockerfile. Options

Let’s use the format option to get only the image ID and which instructions have created it.

This command imports the contents of a tarball. You may take data directly from STDIN by specifying a URL or - (dash). The URL should point to a filesystem or server containing a tarball file (.tar,.tar.gz,.tgz,.bzip,.tar.xz, or.txz). Docker always extracts an archive in the container relative to the root directory. You must define the entire path inside the host if you specify a single file. To specify a URL, start with the http:// or https:// protocol to import from a remote place. To create a new untagged image you can use the command:

This will import or download the file from github, unzip or unrar it and build an image. Or you can do the same with the file in your local filesystem. Options :

This command displays some low-level details about an image, such as its creation date or creator and some other details as well. It prints out a JSON formatted array by default. Syntax : 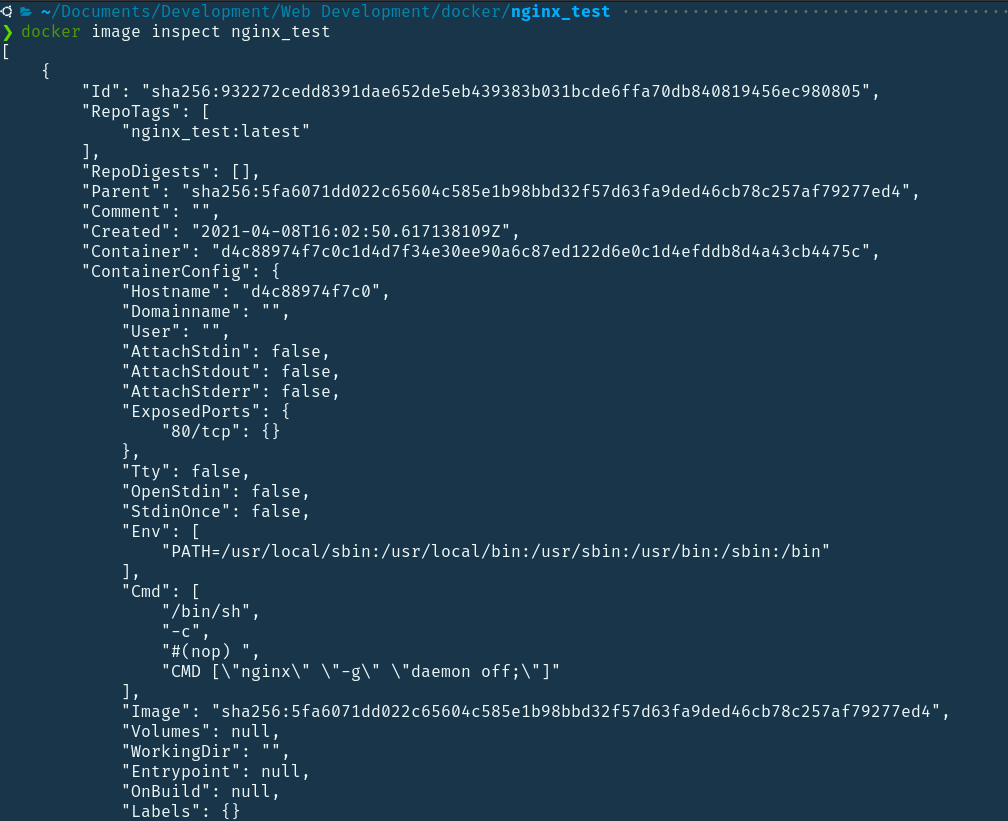 This command returns a JSON array that has details such as the Image ID, the parent image of this particular image, the repo-tags which we specified in the earlier section using -t. You can get the image name of the image use the below command:

This gives us the name base image or the parent image used in the dockerfile to build this image.

This command is used to list out the images in your local machine. Syntax :

The normal command lists out the images excluding the intermediate images. Options :

As you can see, the output of this command lists all the images including the dangling ones.

This is used to pull images from a repository or the docker registry. Syntax :

When you pull images, it gets saved in your local storage. When you build a custom image, it first searches in the local repo. If it finds a match, it uses that image and if not, it pulls it from the remote repo or registry. Let us pull an interesting image from the docker registry, called jturpin/hollywood which simulates the hacker screen in Hollywood movies. After pulling the image, we can use the docker run command to run that image in a container.

Press CTRL+C to exit and then you will land in its shell, type exit to get out of the terminal.

You can use this command to log in to docker. You will be prompted to enter the username and password, so enter the same ones which you used to create an account on docker hub. While pushing an image you need to tag it with a prefix of your username on the docker hub. Hence, the name of the image that will be pushed is - username/image_name. Syntax :

We can use this command to remove one or more images from the local machine. Syntax :

When we execute the docker image ls command, we get a list of images along with their names and image IDs that can be used to remove them. Now, let's remove the ubuntu_nmap image and the nextcloud image.

This deleted all the intermediate images and the final image as well.

Tags are just metadata that we can give to an image. It helps us to keep track of image versions. It can contain lowercase and uppercase characters, numbers, underscores, periods, and dashes. A tag name can't begin with a period or a slash, and it can only be 128 characters long. You can use names and tags to organize your images before uploading them to Docker Hub's repositories.

We can tag the Jenkins image with a repository name and its version.

We can see in the above image that there are two images, the first one is the original Jenkins image and the second one is the image that we created just now with a new tag. You can also use the image name instead of the image ID and usually the repo name used is the username of docker hub, stating that it belongs to your repository.

In this article, we started with a basic explanation about docker images and the image layering concept. After that, we defined what Dockerfiles are and their role in image creation. Then we deep-dived into several docker image commands which are very necessary to build docker images and also maintain or debug them. We certainly hope that you are now able to get hands-on with important Docker Image Commands. Happy Learning!