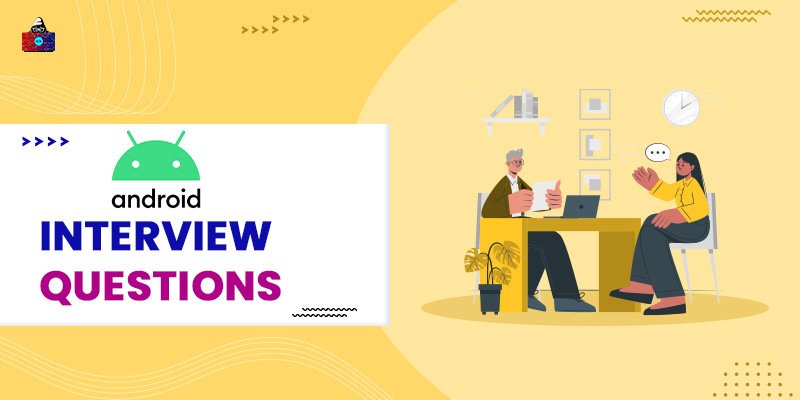 These days everyone is aware of Android because it is everywhere. It has a huge market all over the globe. Google, the parent company of Android, hires developers from across the world to develop Android further. Android flaunts a seemingly infinite number of applications on the Play Store, promising a bright future for Android developers.

This article discusses some of the best Android interview questions. Many tech and non-tech companies are releasing their own Android applications to increase their reach in the market. Having an Android application these days has become as important for a business as having a company website.

At present, Android dominates the smartphone market, with more than 70% of active mobile users using Android. If you are an Android developer and preparing for an upcoming interview, we suggest you go through these best Android interview questions, so you can ace the interview and get the job you want.

Answer: Android is an open-source operating system primarily for mobile devices, such as smartphones and tablets, and it is based on the Linux Kernel .

2. Name the latest version of Android.

Answer: Android 12.0 is the latest version of Android that came out in October 2021.

3. Name all the Android versions.

4. What is the Android SDK?

Answer: Android SDK (Software Development Kit) is a suite of development tools to create applications for the Android platform. It is now known as Android Studio . Basically, it is used to emulate an Android environment. This is a very handy tool to develop and test how your Android application will run on Android devices.

5. Name the components of an Android application .

Answer: The various components of an Android application are:

6. Give some advantages of Android.

Answer: There are several advantages of using Android. Some of the best ones are:

7. Which programming languages are supported by Android?

Answer: .APK (Android Application Package) is the android app file extension. It is a compressed file format that contains all the application code, resource files, certificates, and other files. All the application files are compressed into a single file so that distribution and installation become easy.

10. Name all the layers of the Android Architecture .

11. What is an Android framework?

12. Do all mobile devices support the latest Android version?

Answer: There are some limited mobile devices in the market that support up-gradation to the latest version of the operating system. The main reason why every device does not get the latest version is because of its hardware specification.

13. What does the Application Framework do in Android Architecture?

Answer: It is one of the most important layers of Android architecture that provides many high-level services to the application in the form of Java classes. Some of these services are Activity Manager, Content Provider, Resource Manager, Notification Manager, and View System.

14. Why can’t we run Java byte code on Android?

15. What happens to the activity when a user rotates the screen?

Answer: When the user rotates the screen, the instance of the current activity gets terminated, and a new instance gets created simultaneously.

16. What is the difference between File, Class, and Activity in Android?

Answer: A file stores information, while a class holds some functionality, and it compiles from the java source file so that Android can use its functionality. An activity , on the other hand, is a view or a user interface that allows a user to avail the functionality of a class.

Answer: Containers, as the name itself implies, hold objects and widgets together depending on the specific, required items and the particular arrangement that is required. Containers may hold labels, fields, buttons, or even child containers.

Answer: Following are the various tools that are part of the Google SDK:

Answer: ANR stands for Application Not Responding. It is used when the application's main activity stops responding for a while. It depends on some conditions, like if there is no response to input after 5 seconds or the broadcast receiver doesn't complete execution within 10 seconds.

Answer: AAPT stands for Android Asset Packaging Tool. It is a tool that is a part of the Google SDK, and it helps the developer to handle zip-compatible archives, i.e., create, extract and view the contents.

21. How do we pass data to sub-activities?

Answer: We use HashMaps-like structures, such as Bundles, to pass trivial data from one activity to its sub-activities.

Answer: WebView is a window or view that displays web pages inside an Android application. It gives a web browser-like look to the application. WebView uses the WebKit rendering engine to display web pages, and it also includes some navigation tools like forwarding, backward, and history buttons.

Answer: Context is a class that handles the current state of a running Android application. It provides services like resolving resources and accessing the database. There are two types of Context:

The content provider provides data from one application to another upon making a request. It manages the structured set of data and also provides data security.

Answer: Android has several storage methods. These are:

Answer: No, it is not possible to run JAR files on Android. However, we can compress the same into Android Packages (.apk) with the help of the Asset Packaging Tool (APT) and then run them on Android.

Answer: A fragment is a modular form of activity, and it can also be understood as a part of the activity that can combine with other fragments in a single activity, which makes it reusable.

30. What does orientation do in Android?

Answer: Orientation is an activity that represents the layout of a screen display in the form of rows and columns.

31. Can we add a fragment without a user interface?

Answer: Yes, we can use the add(fragment, string) method to add a fragment from the activity.

32. Explain the lifecycle of an Android Activity.

33. What is intent in Android?

Answer: Intent, a.k.a. intention, is used to perform actions. It is an object that sends a message to other components of the application and requests some action. There are two types of intent:

34. What is the difference between implicit and explicit intents?

Answer: Implicit intent is used when a user performs an action. For example, sending a message and dialing a number on the dial pad. Explicit intent, on the contrary, helps the user to move from one activity to the other.

35. How can we clear the back stack of activities when a new instance of an activity is called?

36. What is the role of DVM (Dalvik Virtual Machine) in Android?

37. Give the difference between Android Service and Intent Service.

Answer: Android Service performs an operation in the background, such as playing music, but it does not provide any user interface. On the other hand, Intent Service is used to handle on-demand asynchronous requests.

38. What do you know about toast in Android?

Answer: Toasts are simple popup messages that provide feedback about the current operation. A toast is useful when there is an ongoing process, and we want to show the processing message without affecting the current activity and display. Example:

39. What do you know about broadcast receivers?

Answer: Broadcast receivers are used to respond to the broadcast messages sent from the other applications or the system itself. An application can receive broadcast via two methods:

40. Explain the various important files and folders that we use when we create a new Android app.

41. What do you know about sticky intent?

Answer: Sticky intents are used with sticky broadcasts, and a sticky intent stays with the Android system for future broadcast receiver requests. To perform a sticky intent, we use the sendStickyBroadcast() method. It got its name because the intent will be available even after the broadcast is complete.

42. What is the difference between an activity and a fragment?

Answer: An activity can be treated as a signal that deals with operations performed by the user, such as dialing a number, clicking a picture, and sending an email. A fragment, on the contrary, is a modular part of the activity, and it has its own lifecycle with input events. A fragment gets affected by its parent activity.

43. Why is it recommended not to change the application name after deployment?

Answer: We can change the application name whenever we feel so. However, in the development and deployment processes, doing so is not recommended because it can affect some of the application functionality that could result in application failure and breaking of the app.

Answer: It is a debugging tool offered by Google SDK, and it stands for Dalvik Debug Monitor Server. DDMS offers the following features:

Answer: Android Runtime , a.k.a. ART, is a runtime environment used by the Android application and services. Similar to its predecessor Dalvik, ART was designed especially for Android projects. It is capable of executing the Dalvik executable format and the Dex bytecode specification. ART is well compatible with Dalvik, so applications written for Dalvik can also run with ART.

Answer: When there is a change in configuration, the state of activity changes too. The activity gets created and destroyed according to the triggered events. Here is the list of major activity states:

48. What is a dialog? Name the dialog box supported by Android.

Answer: It is a prompt window that allows the user to enter some additional information. A dialog window does not cover the screen completely and simply provides a small popup-like window for decision and input entry. Android provides support for the following types of dialog boxes:

49. Name the exceptions in Android.

Answer: Exceptions are the errors that occur in the program due to some ill-logical code. Following are the various exceptions in Android:

Answer: Here, dex stands for Dalvik Executable File. The Dalvik Virtual Machine (DVM) compiles an Android program into a .dex file. Later, this .dex file is zipped into a .apk file on the device.

Here, we have reached the end of our list of the top Android interview questions. We hope you liked this article and you got to know something new. If you have ever been in an Android job interview, please comment down the Android interview technical questions you faced during the interview, and we will try to answer them.

We hope these Android questions help you to crack the interview. If you like this article or have any suggestions, please let us know by commenting down below.

Make sure to have a strong foundation in Java and Kotlin. Develop all other required skills, such as data structures and algorithms, operating systems, etc. Get your hands dirty using Android Studio. Create small Android projects and mention them in your resume. You can even work as an intern to gain more experience. Finally, apply for jobs.

Once you are well-versed in Android development, you can appear for interviews. To prepare for an interview, go through the above list of commonly expected interview questions on Android. You will have a good idea of what questions you can expect. Also, going through the above questions will help you brush up on your knowledge.

Yes, Android is challenging yet the most demanding skill today. You require to have a thorough knowledge of Java as well as Kotlin, along with all other essential skills. With the right resources, time investment, and strong determination, you can learn Android development.