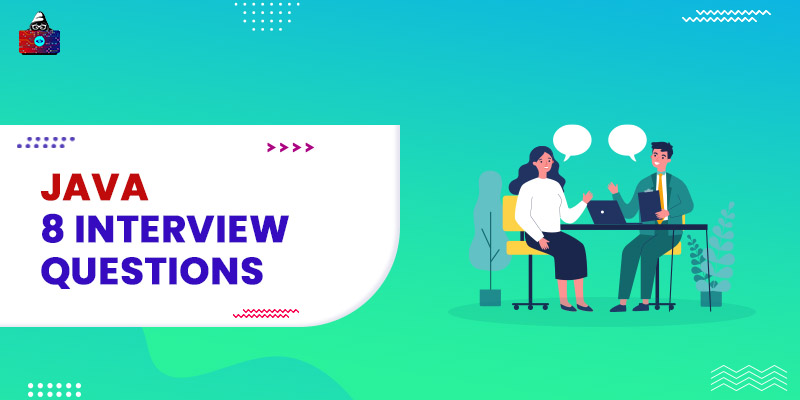 Java is one of the most popular and widely used programming languages. Many organizations use it for web, desktop, and mobile app development, which is why Java Developers are always in demand.

The new versions or updates do not change the complete syntax; they are only supposed to bring new advanced features in Java. Also, many new versions are intended to solve the bugs or issues present in the preceding versions.

Nonetheless, what we are going to discuss in this article are some of the most popular Java 8 interview questions that can help you land a well-paying job. Also, you need to know that Java 8 is among the most popular versions of Java that many developers learn to get started with Java.

1. Name the new features which were introduced in Java 8.

2. What are the major advantages of using Java 8?

Here are the key advantages that developers get while working with Java 8:

3. What is the Lambda expression?

Lambda expression is one of the new features of Java 8 , and it is also known as anonymous functions. Lambda Expression provides an easy and concise way to write the user-defined function in a single line. It comprises a set of parameters and the function body, and we can call it without a name.

4. Explain the syntax of Lambda Expression.

The Lambda expression syntax is divided into 3 parts:

Argument : The lambda expression is similar to the user-defined function with no name, and as a function, it can accept zero or more than 0 arguments.

Array token : Array token is a special symbol, represented by ->, and it acts as a separator between the arguments and function body.

Body : The body contains the expression or statement, and it resides in curly braces.

Here a and b are two integer arguments, -> symbol is the array token, and a+b is the function body or statement.

5. What is the type of Lambda Expression?

6. Give some advantages of Lambda Expressions.

The use of Lamba expressions helps to:

7. What is the target type of a Lambda Expression?

The functional interface for which the Lambda Expression has been invoked becomes its target type.

here TT is the target type of lambda expression le .

StringJoiner is the new class introduced in Java 8 which is used to join the string using a delimiter. We can also use prefix and suffix with StringJoiner to add a specific string at the beginning and end of a string.

9. What are the Functional Interfaces?

Functional Interfaces were first introduced in Java 8, and they allow users to define exactly one abstract method inside the interface. These interfaces are also known as Single Abstract Method Interface (SAM interface). To create a functional interface in Java, we can either use Lambda expressions, method references, or constructor references.

Using the lambda expression, we can apply the abstract method in an interface to create a functional interface.

11. Why do we need a Functional Interface in Java?

12. How can you create your Functional Interface?

Java can implicitly identify functional interface, however, we can also annotate it with @FunctionalInterface.

13. Is it necessary to mention the annotation @FunctionalInterface to define a Functional Interface?

14. What is the key difference between collections and stream API?

The collection is used to store and group the data in a proper data structure , whereas the stream is used to perform data operations on that data.

15. Mention some of the Limitations of Stream API in Java 8?

Following are the key limitations of Stream API:

Basically, it is an Iterator like Java Iterator and ListIterator, which is used to iterate elements from a collection, an I/O channel, or a Generator function. It is introduced in Java 8 and defined as an interface in Java collection API, and it resides in java.util package. It uses tryAdvance() method to iterate in multiple threads for parallel processing and forEachRemaining() method for a single thread.

17. What is the key difference between Iterator and Spliterator?

Method reference feature is introduced in Java 8, and it is used to refer to the method of functional interface. It can also be considered as an easy and compact form of the lambda expression.

In Java 8, we have a class java.lang.reflect.parameter that helps us to get the information related to the parameter's name and its modifiers.

In Java 8, to avoid the NullPointerException, developers use the Optional class from the java.util.package. With the Optional class, we can write readable and compact code without using too many null checks. Also, we can specify the alternative values to return or alternative code to run.

21. Name the method provided by the option for the fallback mechanism in case of a null value.

If there is a null value in the option, we can use the orElseGet() method as a fallback mechanism.

23. What are the default methods?

24. Why do we require Default methods?

25. What is the difference between Predicate and Functions?

26. What is the major difference between Internal and External iterator?

27. Name the drawbacks of old date-time APIs which were solved with Java 8.

29. How can we get the difference between the two dates?

30. Name the method introduced in Java 8 to process Arrays on multi-core machines.

The new arrays parallel method introduced in Java 8 for parallel processing of Arrays on the multi-core machines are as follows:

31. What is the diamond problem of multiple inheritances?

Consider this C++ class for example:

Here the class D can access the class A method fun(), but if the class B and C override the fun() method in their scope, then the ambiguity will arrive in method resolution by Class D . This ambiguity of method accessing can lead to a trap in multiple inheritances, which is known as a diamond problem.

32. How does the Java 8 update deal with the diamond problem of multiple inheritances?

Metaspace is a new concept in Java 8 to replace the concept of PermGen (Permanent Generation) memory space. Java 8 introduced a new memory space known as Metaspace that handles the memory allocation of the classes and gives better results for the native memory region.

We do not have PermGem in Java 8, it got replaced by the Metaspace. PermGen stands for Permanent Generation, and it is a special heap space that is separated from the main memory heap. Before Java 8, the Java Virtual Machine would use PermGen to keep track of the loaded class and to store all the static content in the memory section.

36. Use only Java 8 APIs, and write code for this statement- “You have given a list of students and you need to filter out all the students whose marks are greater than 1000 and you also need to print their name”.

37. With the help of Java 8 APIs write code to solve this statement- “You have given a list of Students, print the number of students who get marks less than 400.”

38. With the help of Java 8 APIs write a code to solve this statement- “You have given a list of Students, find all the students with the name Luffy.”

39. With the help of Java 8 APIs write a code to solve this statement- “You have given a list of Students, you need to find the student which scores the highest marks.”

40. With the help of Java 8 APIs write a code to solve this statement- “You have given a list of Students, sort all the students based on their rank.”

41. With the help of Java 8 APIs write a code to solve this statement- “you have given a list of Students, now join all the student's name with a comma(,).”

42. With the help of Java 8 APIs write a code to solve this statement- “You have given a list of Students, group them all by their names ”

43. What is the difference between intermediate and terminal operations in the stream?

44. With the help of Java 8 APIs write a code to solve this statement- “You have given a list of numbers, you need to remove all the duplicates element from the list ”

45. What is the difference between findFirst() and findAny()?

The findAny() method helps us to find any element from a Stream. We use it when we are not concerned about the element order, and this method returns an Optional instance. The findFirst() method finds the first element in the stream. We use this method when we want to find the first element from the sequence, or when we are concerned with the element order,

46. With the help of Java 8 APIs write a code to solve this statement-  “you have given a list of numbers, you need to square them and filter out the number which is greater than 20000 and then you also need to find their average”

To tackle the problem of NullPointerException in Java 8, we use the Optional class.

48. What is the predicate function in an interface?

The predicate function in the interface represents the generic functional interface that accepts a single argument and returns the result as a boolean value. It resides in the java.util.function package.

49 What is the Consumer interface in Java 8?

The Consumer interface is a functional interface that resides in java.util.function package. This functional method accepts one argument and does not return any value.

50. What is the supplier function interface?

Supplier interface is a functional interface that is a part of java.utils.function package. This functional method does not accept any argument value but returns an object value using the get() method.

Java 8 is one of the most stable versions of Java, and many organizations still use it for developing new projects and maintaining their already running applications.

The Java 8 interview questions discussed in this article can help you prepare better for your upcoming interview. While the Java concepts are quite large in number, it is difficult to remember them, especially if you are a beginner.

By going through the frequently asked Java 8 interview questions along with their answers, you will be able to refresh your memory pertaining to Java concepts and get mentally prepared for the interview.

Java 8 is a major feature release for the Java programming language that comes with new features and improvements and bug fixes. With the release of Java 8, Java started supporting functional programming. Also, it provides a new JavaScript engine, new streaming APIs, and new APIs for date and time manipulation.

You should learn Java 8 because it is the latest release for Java, which comprises cutting-edge features. Also, it has evolved JVM, libraries, and the Java language itself. The features it provides are intended for improving productivity, security, ease of use, performance, and polyglot programming.

Yes, you have to be proficient in Java 8 as a Java developer. It is the responsibility of every Java developer to have an in-depth understanding of Java 8 and its features.

The features of Java 8 that every Java developer should know are Lambda Expressions, Stream API, Method Reference, Default Methods, and Optional Class.