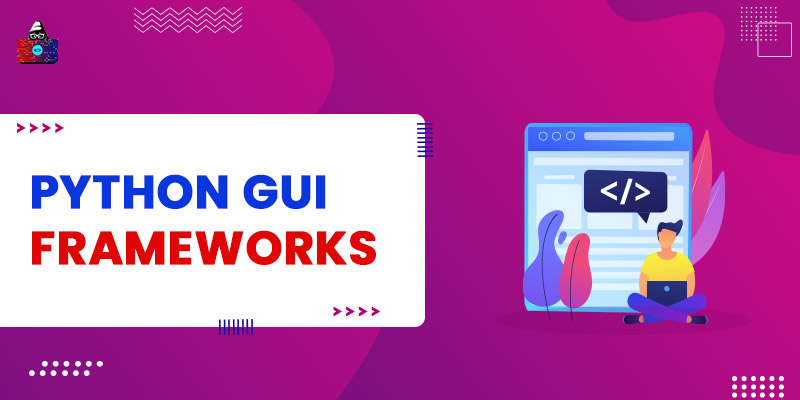 ?No doubt, Python is the most popular and easy-to-learn language. It tops the list of the popular programming languages of 2022, according to the TOIBE Index . A general-purpose programming language, Python, is used for software and web development, data analysis, data visualization, and task automation. Since it has a smooth learning curve, the language is beginner friendly.

If you are just a beginner, you generally have to deal with small Python programs whose outputs are displayed on the terminal with a black background and white text. Basically, you will use IDLE to execute Python programs.

But what if you want to make an interactive and graphical application using the Python programming language?

This is where the role of Python GUI frameworks and libraries comes into play. They simplify the process of creating graphical applications that are more interactive and robust compared to console-based applications.

Gone are the days when developers would have to work for a long time to create a minimalist and simple graphical user interface. Today, frameworks have made this process a breeze.

There is a gamut of frameworks available that help you develop intuitive interfaces in Python for your modern applications. With plenty of options, beginners struggle to choose the right one.

If you are a beginner and facing the same issue, you have landed in the right place. This article aims at making beginners aware of some of the best Python GUI frameworks that facilitate the creation of intuitive user interfaces.

So, let us explore!

GUI is an acronym for Graphical User Interface. It is among the three cornerstone aspects of any application, alongside security and performance. These three aspects play a vital role in creating intuitive applications that offer a seamless user experience.

But what exactly is GUI? It is the first thing or aspect you see whenever you open any application or website. As you are currently reading this web page, you can see various elements, such as title, text, images, etc. This is simply what GUI is.

A GUI consists of various elements, including buttons, icons, graphics, and different forms of input, through which end users interact with an application, website, or any electronic device.

Kivy is the most powerful and widely used Python GUI framework. It is open-source; hence, you can download it for free and use it to build any software application. Being cross-platform, Kivy allows developers to create applications that run on multiple platforms, including Android, iOS, GNU/Linux, Windows, and macOS.

Among all, Kivy is well-known for building Android applications. Also, it is capable of building Raspberry Pi software. Python and CPython form a base for Kivy. Its best feature is the support for multi-touch functionality, allowing developers to fully utilize the power of a device’s screen for input.

Furthermore, Kivy supports multiple types of input, including gestures. Hence, it serves as an excellent platform for creating simple UIs for modern applications. However, it is not ideal for building complex user interfaces.

Kivy comes with the following features to support the development of the application:

Common use cases of Kivy are the user interfaces of Windows, Linux, macOS, and Raspberry Pi devices. To make things even better, it boasts well-written documentation .

Getting Started with Kivy

There are certain prerequisites to installing Kivy on your system – Upgrading Python and pip installation.

The next step is to create an environment to install Kivy and its associated items. I have created a virtual environment – kivy_venv, as follows:

A go-to GUI toolkit, Tkinter, is one of the most preferred among Python developers. It is a de facto GUI toolkit for Python and provides an object-oriented interface to the Tk GUI toolkit. With the installation of Python on Windows, Linux, and macOS, Tkinter comes pre-installed.

This framework is useful for the development of a variety of applications, such as desktop apps. Also, many Python data visualization libraries use it to print graphs and charts. The applications you develop using Tkinter can run on any platform that supports Python.

These visual elements or widgets make it easy to create cross-platform UIs.

Getting Started with Tkinter

You can install Tkinter using the following pip command:

Built on top of the popular C++ GUI framework – Qt , PyQT is a popular and powerful cross-platform Python GUI library. So, developers can create applications for different platforms, including Android, iOS, macOS, Windows, and Linux.

Basically, PyQt is a library and not a GUI framework. Nonetheless, with the help of this library, we can build GUI applications using Python. So, it has its place in the list of frameworks.

The latest version of PyQT is PyQt5, which includes all the required Python bindings based on version 5 of the Qt framework. You get two options to build GUIs with PyQt:

So, PyQt helps you create user interfaces for small as well as large-scale applications and supports code reusability.

Getting Started with PyQt

As its name suggests, PyGame, a well-known library, is packed with robust Python modules for developing cross-platform video games. It comes with a wide range of built-in graphical and sound libraries that help developers build interactive and powerful video games. Besides video games, PyGame supports the development of desktop-based GUI applications.

However, it is important to note that this library is not ideal for graphic designers, as it requires one to have a basic understanding of Python. It has made it possible for Python developers to create video games without the need to use heavy graphical software.

A few popular games developed using PyGame are Frets on Fire, Dangerous High School Girls in Trouble, Save the Date, IndieCade 2013 Finalist, and Drawn Down Abyss.

Getting Started with PyGame

Use the following command to install PyGame using pip:

A top alternative to Python’s de facto standard GUI toolkit – Tkinter, wxPython allows developers to create native interfaces without putting an overload on applications. With just a single codebase (with little changes in some cases), wxPython supports the development of UIs for Unix-based, Windows, Linux, and macOS platforms.

The successor of wxPython, Project Phoenix, provides support for Python 3. This successor was built from scratch with the aim of providing users with a clean Python implementation of wxWidgets.

Getting Started with wxPython

Use the following pip install command to install wxPython in your Python environment:

Also popular as the Python GUI Project, PyGUI is one of the simplest and most lightweight toolkits for creating cross-platform GUI applications. These applications are compatible with Unix-based, Windows, Linux, and macOS. With PyGUI, developers can create UIs using the native elements.

Moreover, PyGUI provides comprehensive documentation in Python to help beginners understand and learn quickly. It supports both Python 2 and 3, and with the help of extensions, it supports the use of OpenGL and GTK .

A few popular features of PyGUI include high performance, stable operations, modern theme control and style, a node editor, and many developer tools. As it is an extremely lightweight API, it requires little additional code between the Python program and the target platform.

Use the following command to install PyGUI.

It is a cross-platform, open-source Python framework that supports Python 2.x and 3.x to create GUI applications, whether it is for desktop, mobile, or web. It emphasizes code reusability and modular software design.

The framework provides the following:

The following command helps you install PyForms on your system:

As its name indicates, PySimple GUI is a simple and beginner-friendly GUI framework for Python development. It was aimed at beginners in Python GUI development. This project has four pillars, as follows:

It takes four other popular frameworks – Qt, Tkinter, WxPython, and Remi, and transforms them into a single interface. Though the default library to use is Tkinter, you switch between the others available anytime.

PySimpleGUI simplifies the creation of UIs by eliminating the difficulties of the aforementioned frameworks. Since it has a lower learning curve, you can completely focus on developing the core logic.

Install PySimpleGUI with the following command:

Libavg is excellent for multi-touch development. It supports Win7 Touch, Linux Drivers, TUIO, and even the Apple Multitouch Trackpad and all major driver models. Additionally, it comes with its own tracker for optical FTIR and DI devices.

Check out the installation guide for different platforms here .

The last on the list is Wax, a wrapper of wxPython. This GUI framework is a Python extension module, like other popular frameworks.

Wax supports creating UIs for cross-platform applications. Its goal is to provide application developers with a more straightforward interface for using Python to build GUIs by removing the low-level wxPython features.

The underlying wxWindows platform is incredibly fast and efficient, and the wax GUI framework benefits from the same degree of speed and efficiency when using the platform's native widgets.

Getting Started with Wax

Using the following command, you can install Wax:

Here ends my list of the best Python GUI frameworks. Almost all of them are open-source, easily accessible, and simple to set up. Also, they are beginner-friendly with a low learning curve.

Though a few of them are libraries, they function similarly to a framework. Hence, I have included them in this list. All of them will help you create intuitive and amazing user interfaces for your applications.

If you want to add any other framework to this list, do let me know in the comments.

GUI is an acronym for Graphical User Interface. It is an interface that enables users to interact with electronic devices. In simple terms, it is a collection of visual components that lets users interact with computer software.

While Tkinter is straightforward and easy and is best suited for small applications, Kivy is pretty complex and offers more features that make it ideal for complex projects.

Since Tkinter is an easy-to-use and straightforward framework, it is ideal for beginners to create the GUI for applications in Python. It is the standard GUI framework for Python applications.

PyQT comes with more GUI widgets, while Tkinter does not. In addition, PyQt provides a more modern look to applications, while TKinter is old-fashioned. So, if you want your application to have a modern look, PyQt is the best choice. On the other hand, Tkinter is best if you are a beginner.

Yes, Tkinter is a faster and easier-to-use Python GUI framework than Kivy and PyQt, as it provides the most basic features.