Difference Between CSS, CSS2, and CSS3 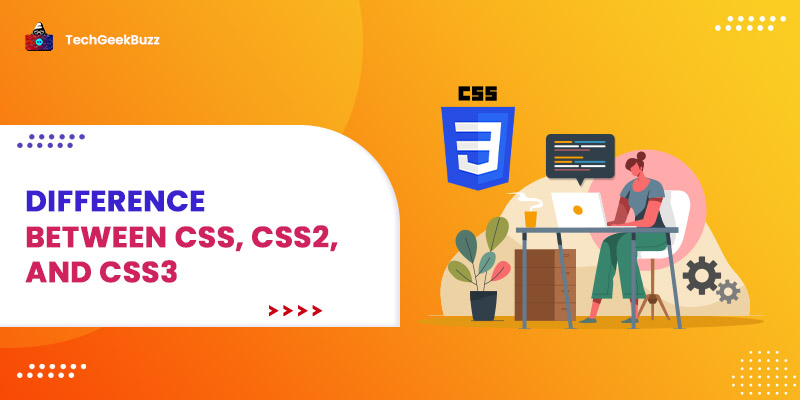 When we think of web development, three core web technologies come into our minds. They are HTML, CSS, and JavaScript. HTML provides the structure to a web page, CSS styles the web pages, and JavaScript provides web pages with interactive elements through which the users can engage.

HTML (HyperText Markup Language) is the standard markup language for creating websites and web applications. CSS (Cascading Style Sheets) is a style sheet language for styling elements and content of web pages. JavaScript is a scripting language for controlling the behavior of web pages.

This blog post aims at demonstrating the major differences between CSS, CSS2, and CSS3. Also, it introduces you to CSS, its types, and features.

So, let us begin without further ado!

What is CSS?  [Definition]

CSS stands for Cascading Style Sheets. It is a style sheet language that styles elements on a web page . In simple terms, it is a design language that makes web pages presentable. It enables you to apply different styles to HTML elements and content to make them more attractive and appealing.

Using CSS, you can control the font and color of the text, spacing between the two paragraphs, background images, layout designs, the size and layout of columns, background color, variations in different screen sizes and devices, and many other effects.

The primary purpose of CSS is to separate the presentation of a website from the content. This enables you to effectively handle the appearance of the website without affecting the content part. With just a few changes in the CSS code, you can make your website look completely different.

In 1994, ??Håkon Wium Lie first proposed CSS. At the time, multiple style sheet languages were introduced, and CSS 1 turned out to be the World Wide Web Consortium (W3C) standard. It was released first in 1996. ??Håkon Wium Lie and Bert Bos are the original creators of CSS 1. However, today, W3C does not maintain the CSS 1 recommendation.

Later, W3C published the CSS 2 specification in 1998. They called it a superset of CSS 1 because it included many new features, including a relative, absolute, and fixed positioning of the z-index and elements, support bidirectional text, new font properties, media types, and support for aural style sheets. Like CSS 1, W3C does maintain the CSS 2 recommendation as well.

Furthermore, CSS 2.1 went to Proposed Recommendation in 2011. At that time, the W3C Advisory Committee reviewed CSS 2.1 specification and finally made it a W3C Recommendation.

The work on drafting the CSS 3 specification started early at the time of the publication of the CSS 2 recommendation. CSS 2 was a large and single specification with a wide range of features, while CSS 3 consisted of separate documents called modules. Here, each module or document incorporates new capabilities to the features of CSS 2.

When you need to style a single specific HTML element, inline CSS is useful. It requires you to specify the CSS for every HTML tag on a web page.

In general, using inline CSS is not advisable because you need to style each HTML element individually, which is very time-consuming. However, it is ideal to use when you need to make quick changes to the style of your website and preview them immediately.

The external style sheet is the most efficient type of CSS that enables you to apply styles to multiple web pages. The primary idea behind this type of style is to create an external file containing the CSS code with the .css extension and use it in HTML pages that you want to style. This eliminates the need for writing the same CSS code again and again for each HTML page.

Here, the CSS code and HTML pages are not in the same file. Instead, they have different files.

Advantages and Disadvantages of CSS

Let us now discuss some significant advantages and disadvantages of CSS in this section.

Difference Between CSS, CSS2, and CSS3

Let us now learn the major differences between CSS, CSS 2, and CSS 3.

The CSS 1 specification was published on 17 December 1996. It included features such as font properties, the color of text, background, and other elements, text attributes, alignment of text and other elements, and margin, border, and positioning of elements.

In just two years, CSS 2 was released with additional features, such as styles for media types, support for aural style sheets , and new font properties. Finally, the work on CSS 3 started in early 1999, which made it possible to prepare presentations from documents.

Unlike CSS 1 and CSS 2, CSS 3 has its specifications scripted into different individual modules. As a result, it becomes pretty easy to work with and handle CSS 3.

CSS 3 has made it possible for developers to use special fonts just like those available in Google Fonts and Typecast. Otherwise, in CSS 1 and CSS 2, developers would use web-safe fonts to ensure that the font they use appears the same on every device.

It was extremely difficult for CSS 1 to adapt to different browsers and maintain consistency across them. CSS 2 also has issues with the browser extensions. However, CSS 3 provides complete support for all types of browsers.

While CSS 1 and CSS 2 have simple selectors, CSS 3 comes with advanced and multiple selectors.

CSS 3 comes with the grid system and template layout module that help developers design the web layout, which was not possible with CSS and CSS 3.

With CSS3, developers can round borders without any hassle, which was very challenging in the previous versions of CSS.

Since CSS3 is modularized, it comes with the capability to divide text sections into multiple columns resulting in improved readability. It was not possible with the previous versions of CSS because they were not equipped with the feature of automatically splitting the text into multiple sections.

Here we have reached the end of our discussion on the difference between CSS, CSS 2, and CSS 3. CSS is one of the most widely used style sheet languages that has made styling websites easier and more effortless. It enables us to style multiple pages of a website at once or style a single element on a web page separately. This means that it provides us with flexibility and significantly saves time while designing a website.

We hope that this blog post has assisted you in understanding the difference between CSS, CSS 2, and CSS 3. Still, if you have any queries, post them in the comments section below.

CSS 3 is the latest version of CSS.

CSS 3 is the latest version of CSS and comes with many new advanced features that the previous versions, i.e., CSS 1 and CSS 2, do not include. Since CSS 3 is an improved and enhanced version of CSS, it generally comes with bug fixes and security improvements. As a result, it is advisable to use CSS 3.