How to Create Plots with Plotly In Python

For this tutorial, we will be using some of Python's most popular Data Science libraries along with Plotly. So make sure that all those libraries are installed for your Python environment. You can install all the below-mentioned libraries using the Python pip command on the terminal/Command prompt or directly use the Jupyter Notebook to install libraries .

Now launch your Jupyter notebook and start with importing the required modules.

Now let's first create a random numpy array of 20 rows and 5 columns and then convert it into a Pandas DataFrame. Then using the cufflinks API, we can call the iplot() method on the DataFrame to plot the DataFrame values on Plotly.

When you execute it on the Jupyter notebook, you will see the similar output 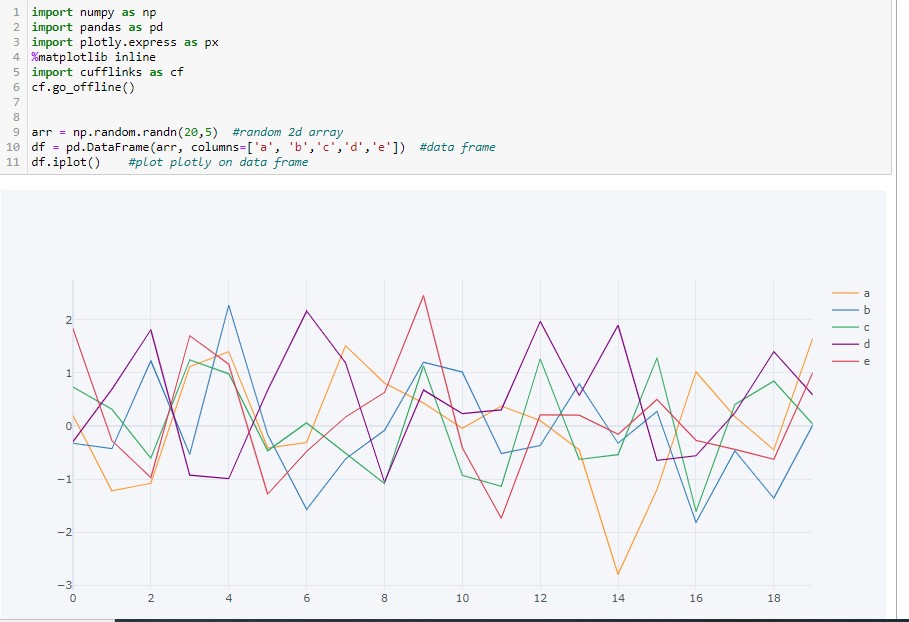 As you can see that Plotly give more option than the standard Python matplotlib library and its graph are more interactive.

Now let's plot a line Graph with Plotly. We will start with importing the required libraries.

Now we require a data set on which we can Plot the graph. Luckily, the Plotly library comes with some built-in custom data sets for example purposes. You can check out all the data sets from the Plotly Data Package official website.

Here we will be using the Medel for Olympic Short Track Speed Skating data set provided by Plotly as data.medals_wide() 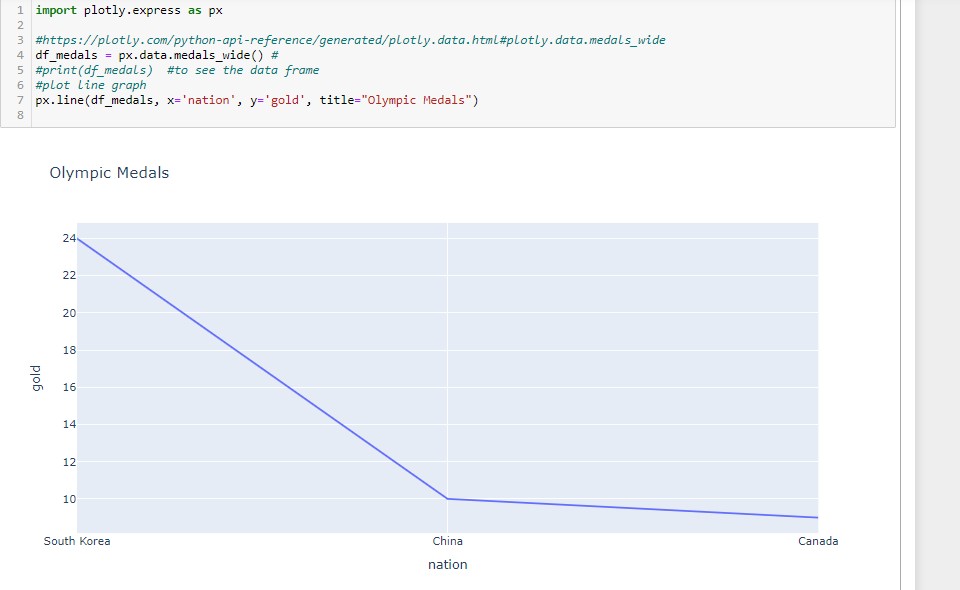 Bar charts can be used to visualize the result, which varies in the time interval. To plot a bar chart using Plotly, we use the Plotly bar() method. Here we will be Plotting the population bar graph for India. For the data set, we will be using the Plotly data package gapminder() function. Which will return a data frame of countries with their population, life experience, GDP, etc., details. 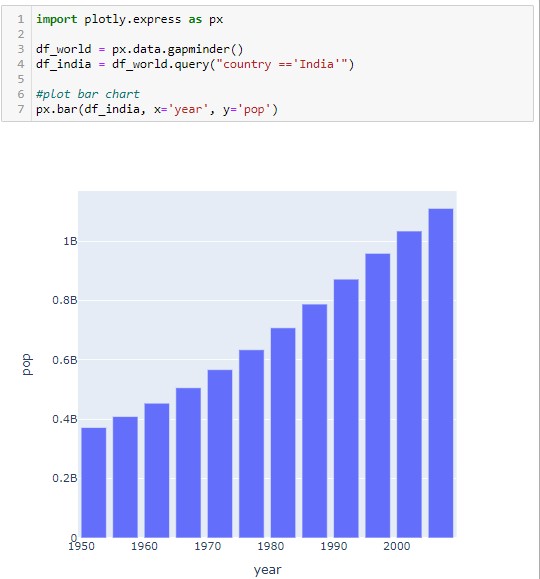 Scatter Plot is a graphical dot value representation for two or more two variables. To plot the scatter plot in Plotly, we use the Plotly scatter() method. For this tutorial, we will use the Plotly Data Package tips() data set and plot a graph for tips paid by the men and women on the Total bill paid. 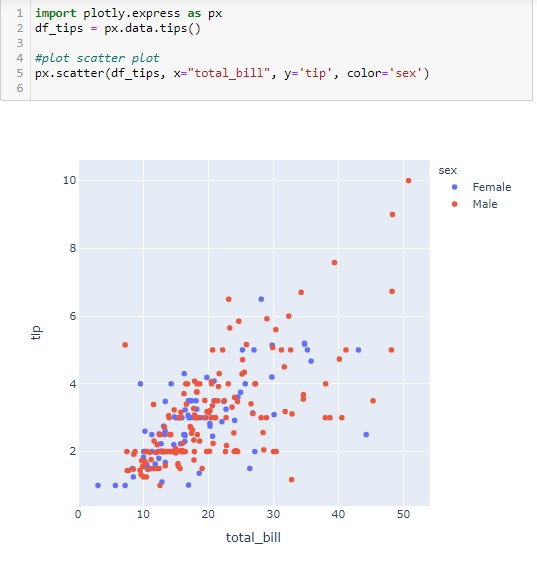 The pie chart is represented like a circular piece where every variable is defined as a slice from the piece. Pie charts come very useful when we want to show the individual part or proportion occupied by every variable. To plot a Pie Chart in Plotly, we use the pie() method. In the example below, we will be plotting a pie chart representing the population of the top 7 countries of Asia in 2002. 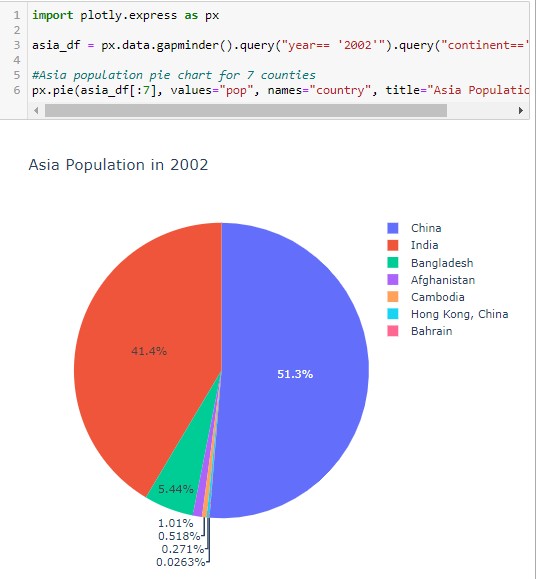 Histogram plots are similar looking to the bar plots, but the histogram is used to visualize the data distribution. With the histogram, we can easily estimate the major surge of values. For the example below, we will create two random arrays of 7000 values representing dice numbers between 1 to 6 and sum them. And with a histogram, we will see which number is occurred most of the time. To plot a Histogram in Plotly, we use the Plotly histogram() method. 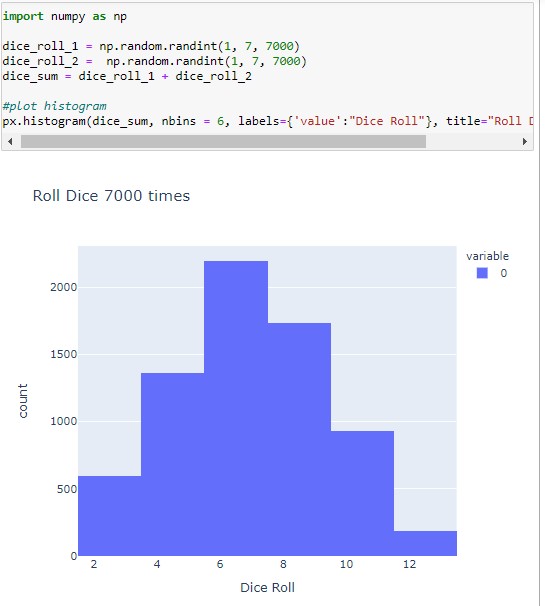 This tutorial is all about Plotly basic and how to plot basic plots using the Python Plotly library. The Python Plotly library is capable of doing more stuff. We will recommend you go through Plotly official documentation , where they have provided the best tutorials and exexamples to get started with Plotly.