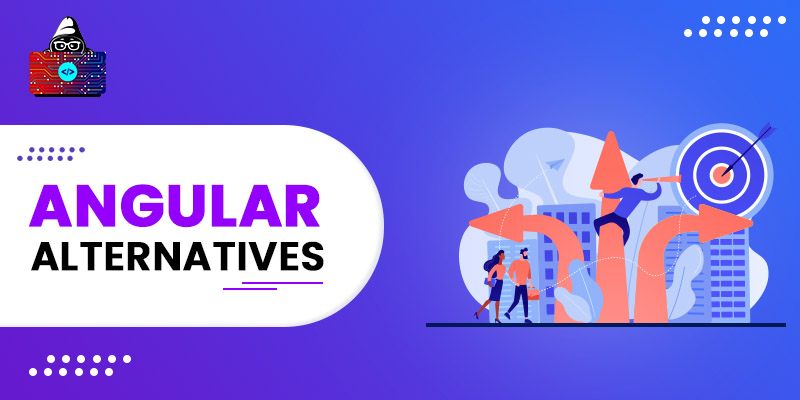 In this article, we shall introduce you to one of the most in-demand JavaScript frameworks named Angular. Later, we will discuss some top Angular alternatives and their key characteristics. So, let’s get started.

Angular is a superheroic JavaScript framework used for creating interactive and responsive web applications. This front-end framework is open-source and supports the development of single-page applications.

Google has developed the Angular framework and released it under the MIT license. Additionally, this framework is a rewrite of AngularJS. Developers can use this framework for creating applications in TypeScript and JavaScript. In addition, the MEAN stack uses Angular for frontend development.

There are certain benefits and drawbacks of Angular. You must be aware of the fact that the disadvantages of the framework that you choose can have a negative impact on your project. Therefore, before we proceed to Angular alternatives, we shall discuss some main disadvantages of Angular.

Below is a curated list of top Angular alternatives that you can use to create the front end of your websites and web applications.

Vue.js is a globally used JavaScript framework, which is also a great alternative to Angular. It is an open-source front-end framework that follows the Model-View-ViewModel (MVVM) architectural pattern for building single-page applications and responsive user interfaces.

Evan You is the developer of Vue.js, and he used TypeScript language to create this framework. He developed Vue.js under the MIT license. In addition, he has built this framework to make it more lightweight and incorporate the best functionalities of Angular.

The Vue.js framework primarily concentrates on a web application’s view layer. We can say that the view layer is the user interface of a web application. Developers can seamlessly integrate it with other front-end frameworks while developing large projects. Like other JavaScript frameworks, such as React and Ember, Vue.js also incorporates virtual DOM. With Vue.js, developers can create their unique custom elements and reuse them.

This framework has a size of only 18KB, and hence, you can download and install it effortlessly and quickly. If you are a newbie to Vue.js, you watch a video on its website that highlights the framework’s core principles and one sample project.

This framework is extremely lightweight, weighing only 9.79 KB. Many renowned companies, like Nike, Vimeo, etc., and open-source platforms, like Lichess, use Mithril. Another advantage of using Mithril over Angular is that it is faster. This is so because it utilizes the code’s lower magnitude to run. Mithril is compatible with several popular browsers, like Microsoft Edge, Internet Explorer 11, Firefox, Google Chrome, Firefox ESR, and Safari.

Knockout is an open-source JavaScript framework that is among the most acceptable Angular alternatives. It is a standalone front-end framework that follows the Model-View-ViewModel (MVVM) architectural pattern. Steve Sanderson is the developer of Knockout. He developed this framework in the JavaScript language and released it under the MIT license. This framework has two crucial underlying principles, as stated below:

Additionally, the Templating feature helps developers to create more sophisticated UIs that serve as functions for their model data. Beginners can easily learn the Knockout framework with detailed docs, interactive tutorials, and live examples available on its official website.

Polymer is yet another popular name when it comes to the best Angular alternatives. It is a JavaScript library that enables web developers to use various components for creating responsive web applications.

Google and some GitHub contributors are the developers of this JS library. They developed Polymer using JavaScript and HTML and released it under the 3-clause BSD license. Various Google websites and services use this JavaScript library, such as Google I/O 2015 and 2016 websites, Allo for web, YouTube, Google Play Music, YouTube Gaming, etc. Moreover, other well-known users of this library are Coca-Cola, Netflix, Comcast, Nuxeo, IBM, and Electronic Arts.

Polymer provides web developers with a broad spectrum of functionalities over Vanilla web components, such as computed properties, gesture events, one-way and two-way data binding, repeat and conditional templates, and custom elements. It is a lightweight JS library that has a straightforward ecosystem. The best part of Polymer is its design process that follows an interoperable lego block structure.

Another popular alternative to Angular is Sencha Ext JS. It is one of the most comprehensive JavaScript frameworks that enables developers to build cross-platform mobile and web applications. This framework incorporates more than 140 tested and pre-integrated UI components that ensure the high performance of applications.

Some of these UI components are trees, HTML5 calendar, D3 adapter, forms, lists, grids, pivots, panels, windows, and toolbars. Sencha Ext JS has pre-integrated tools, like Stencils and Themer, and Sencha Architect that helps to improve an application’s design process. Also, the Sencha Architect tool incorporates the drag-and-drop feature. This framework includes a tool called the Sencha test that serves as an end-to-end testing solution.

Aurelia is the next-generation UI framework and is the best Angular alternative. Web developers use Aurelia to develop web, mobile, and desktop applications. This framework is extremely easy to learn and use. It follows an unobtrusive style and allows the creation of multiple UI components using vanilla JavaScript or TypeScript.

Users who have little knowledge of HTML and modern JScan quickly build complex applications using the Aurelia framework. Additionally, it is a high-performance framework used for creating apps that provide users with a consistent experience despite the complex UIs. Aurelia has an extensive ecosystem that incorporates plugins for validation, state management, and internationalization.

In addition, it provides optional tools, such as VS Code Plugin, CLI, and Chrome Debugger, for improving the development process. Additionally, it includes a sturdy Dependency Injection Container and a testing library that make unit testing quicker, more efficient, and easier. Aurelia’s extensibility is unmatchable with other frameworks. It allows developers to create custom elements, customize template syntax, and add attributes to existing elements. Aurelia is not only a framework but a comprehensive and robust ecosystem that enables faster development of websites and web apps.

Since its development, React has served as one of the most prominent JavaScript libraries. It is another open-source and free-to-use alternative to Angular for developing user interfaces. At present, Facebook maintains this library, and it is available under the MIT license.

It helps developers generate encapsulated components and combine those components with building intricate UIs. Today, many people choose to React as their front-end tool over Angular because it is highly flexible, lightweight, easy to comprehend, and, more importantly, has strong support from Facebook. Renowned companies, such as Netflix, Whatsapp, Yahoo, etc. use React.

Additionally, developers can use React as a base for building mobile and single-page applications. Any beginner to React can learn it quickly through the detailed documentation available on its official website.

Like React, Riot is also a UI library that offers advanced functionalities and is among the well-known Angular alternatives. It is an incredibly lightweight and tiny component-based UI library that developers use to generate flexible and responsive web applications. Riot incorporates custom elements that are compatible with all modern browsers.

A custom element in Riot is a combination of relevant JavaScript and HTML code. In addition, the library features custom tags that enable developers to use HTML for creating complex views. Also, this JS library lets developers generate components using preprocessors of their choices, like Rust, TypeScript, JavaScript, and Next.

Though Riot is lightweight, it incorporates all features that a comprehensive UI library should possess. The size of Riot is just 6.44 KB. It is a perfect UI library that incorporates everything required for developing modern client-side applications.

Backbone is yet another powerful JavaScript library that follows the Model-View-Controller (MVC) application design pattern. Jeremy Ashkenas developed this JavaScript library with JSON and RESTful interface using the JavaScript language and released it under the MIT license.

Ember is an open-source and popular alternative to Angular. It is a modern JavaScript web framework that helps to build scalable and feature-rich web applications. Like Knockout and Vue.js JavaScript frameworks, Ember also follows the Model-View-ViewModel (MVVM) architectural design pattern. It is a comprehensive framework that offers everything required to develop UI components compatible with any device.

Web applications developed using the Ember framework are robust and responsive. Also, these applications incorporate a development environment, along with the test runner, auto-reload, and fast rebuild features. Additionally, Ember has a router that serves as a high-grade solution that supports various nested URLs. Another significant feature of Ember is its support for end-to-end testing of web applications.

There are three distinct levels of testing in Ember that test everything, starting from individual components to the final application. Ember offers communication channels, like Discord community chat and Discussion Forum, enabling users to raise their queries or get in touch with the support team.

Every framework has its own benefits and pitfalls. Ultimately, it is the decision of developers to choose the best front-end framework as per their requirements. Angular is one of the leading JavaScript frameworks, but it has certain shortcomings that may influence you to look for the best Angular alternatives.

We have listed some popular and in-demand JavaScript frameworks and libraries that are alternatives to Angular. We recommend you choose one from the list that best meets the requirements of your project.