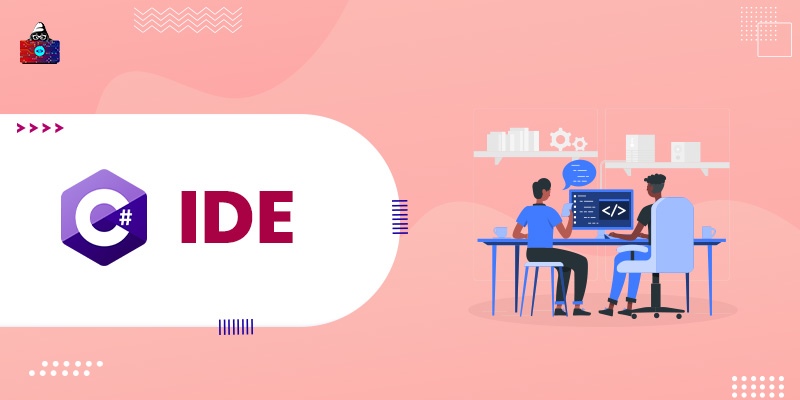 If you are interested in developing applications, websites, or games in C#, you might be in search of the best C# IDE or code editors that make the development process effortless and convenient.

Through this article, we shall introduce you to some of the best offline IDEs, online IDEs, and code editors for C# development. But before diving deep into the topic, let us first walk you through what actually C# IDE, code editor, and online IDE are.

IDE is an acronym for integrated development environment. In general, an IDE is a standalone software that provides several developer tools to facilitate the software development process. It integrates all the necessary tools required for writing and testing software under a single GUI. An IDE at least consists of a source code editor, compiler or interpreter, and debugger.

What is a C# Code Editor?

In general, a code editor can be a standalone application or part of an integrated development environment. Additionally, several code editors are equipped with advanced features, such as syntax highlighting, auto code completion, error detection, brace matching functionality, and so on, to accelerate the process of writing source code.

What is an Online C# IDE?

An online integrated development environment, also referred to as a cloud IDE or web IDE, is a browser-based IDE that you can access from a browser, such as Google Chrome, Firefox, Safari, and more. We can refer to an online C# IDE as an IDE that can be accessed from a web browser and enables developers to write code in Csharp.

A typical online or web IDE also consists of a source code editor, a compiler , and a debugger. The primary advantage of online IDEs is that we can access them anywhere and from any compatible device. In addition, online IDEs do not require users to download and install any software for using them.

Here is our list of the most popular C# IDEs (offline and online) and source code editors that facilitate the software development process:

Visual Studio is available in three different editions, namely Individual, Business, and Enterprise. The Individual edition for macOS and Windows is free to use. The Business and Enterprise editions are paid ones, and you need to contact the sales team for their prices.

Rider is yet another widely used IDE for developing C# applications. It is a cross-platform IDE compatible with Windows, Linux, and macOS operating systems. It supports all languages used in .NET development, such as C#, VB.NET, F#, JavaScript, TypeScript, HTML, CSS, JSON, SQL, XAML, and XML.

Eclipse is an open-source integrated development environment for Java. However, it also supports many other programming languages, including C#, C, C++, Python, Ruby, Perl, R, and PHP. It is a cross-platform IDE compatible with Windows, Linux, and macOS operating systems. Additionally, the IDE is used to create documents using LaTex and packages for Mathematica.

The Eclipse IDE is free to use.

Developer: Xamarin and the Mono Community

MonoDevelop is yet another powerful IDE for developing C# applications. But its primary focus is on developing applications that use Mono and .NET frameworks. It lets you develop applications in various programming languages, including C#, D, C, C++, Boo, Java, Vala, JavaScript, Visual Basic.NET, and TypeScript. It is compatible with Windows, macOS, and Linux operating systems.

JDoodle is an online compiler and editor that supports several programming languages. It enables you to compile and execute programs written in C#, Java, C, C++, PHP, Perl, Python, Ruby, and many other programming languages. This online tool is not a complete IDE. Instead, it just provides a quick approach to compiling and running small programs.

Nonetheless, JDoodle eliminates the need to open an IDE and create new projects for executing small programs. JDoodle is an online program, especially developed for students to learn to program online. It provides the following services:

OnlineGDB is an online compiler and debugger. It allows you to code, compile, run, and debug programs written in C, C++, Java, Python, C#, Ruby, Perl, R, Go, JavaScript, and so on. OnlineGDB is the world’s first online compiler that provides a debugging facility with an integrated GDB or GNU debugger.

OneCompiler is a free online compiler that enables you to write, run, and share your source code. It comes with support for more than 60 programming languages, including C, C++, C#, Java, JavaScript, R, Python, PHP, Ruby, Go, and Kotlin. Also, it extends its support for various databases, which include MySQL, PostgreSQL, SQLite, MongoDB, and MariaDB.

OneCompiler is completely free to use.

Browxy is an online IDE and compiler that allows you to create, compile, and run code written in various programming languages, such as C#, C, C++, Java, and PHP.

Browxy is a free-to-use online IDE and compiler.

Developer: Microsoft License: MIT License (binaries are available under the proprietary license) Visual Studio Code or VS Code is an open-source code editor developed by Microsoft, and it is available for Windows, Linux, and macOS platforms. It is more than a source code editor since it features a debugger.

This source code editor is based on the Electron framework, which is a framework used for developing Node.js applications. It supports all major programming languages, including C#, C++, C, Go, Java, JavaScript, JSON, TypeScript, Python, and PHP.

You can download and install VS Code for free.

Notepad++ is an open-source text and source code editor for Microsoft Windows, which uses the Scintilla editor component. It enables you to write and edit source code in many different programming languages, including C, C++, C#, Java, JavaScript, Python, R, PHP, and Ruby. Moreover, the code editor has won the SourceForge Community Choice Award for the Best Development Tool twice.

Atom is a free and open-source text and source code editor for Windows, macOS, and Linux operating systems. The best part of this code editor is that it is hackable or customizable. It allows you to write source code in different languages, including C, C++, C#, Java, Python, Ruby, PHP, COBOL, JavaScript, TypeScript, and CoffeeScript.

Atom is available for free.

However, Visual Studio’s Individual edition is free, and Rider offers a 30-day free trial. All the online IDEs listed above, namely JDoodle, OnlineGDB, OneCompiler, Ideone, and Browxy, are free to use.

Moreover, Notepad++ and Atom are C# source code editors that you can download and use for free. While choosing an IDE or source code editor for your C# project, make sure that it has all the features that you are looking for. Also, the IDE or code editor you pick should meet the requirements of your project along with your budget.

C# or C sharp is a general-purpose, object-oriented, and type-safe programming language. It is more analogous to C, C++, and Java languages as it has its origin in the C family. With C#, you can develop applications that run on the .NET framework.

The primary reasons to leverage a C# IDE are it facilitates the development of C# applications by providing various features, including auto-completion, syntax highlighting, code refactoring, debugger, setting breakpoints, and ready-made code templates.

The widely used IDE for C# development is Visual Studio because of its robust features and the availability of a free individual version for macOS and Windows.