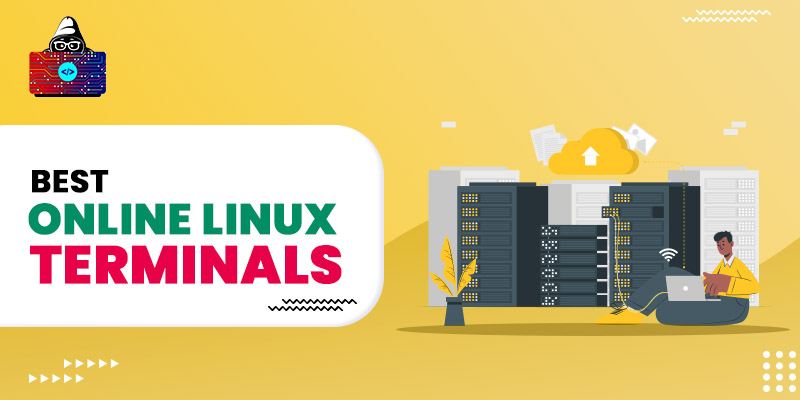 If you are an avid Linux user, you must probably be familiar with virtual Linux terminals, also referred to as virtual consoles (VC). A Linux operating system comes with a virtual terminal. It is used to run and control various utilities and applications. Not just Linux, virtual terminals are used by most Unix-like operating systems too, including Linux, illumos, BSD, and UnixWare. These allow to enter commands using the keyboard and display the output.

What is an Online Terminal for Linux?

So, what's the difference between a VC and an online Linux terminal? Not much, except that a remote server hosts a Linux terminal online and it is accessible through an internet connection, though with certain limitations. Using a Linux online terminal could be a new experience for you.

Now, why do we use an online terminal? If you're a student or a newcomer in software development who wants to study Linux commands, it's difficult to set up virtual machines on any local device to practice. To overcome this, you can use an online Linux terminal to test shell scripts and commands, or link to a remote Linux server via SSH.

There are tons of Linux terminals and bash compilers available online. It doesn't matter if you want to learn Linux commands or simply execute your shell scripts, a terminal Linux online can help you out. This is particularly useful when using Windows. While Windows Subsystem for Linux is available to install Linux within Windows, Linux terminals are more useful for a fast test.

In this article, we will discuss 10 of the best online Linux terminals. You can use them to quickly get started with Linux commands without having to go through the hassles of installing and setting up virtual machines or Linux distros . 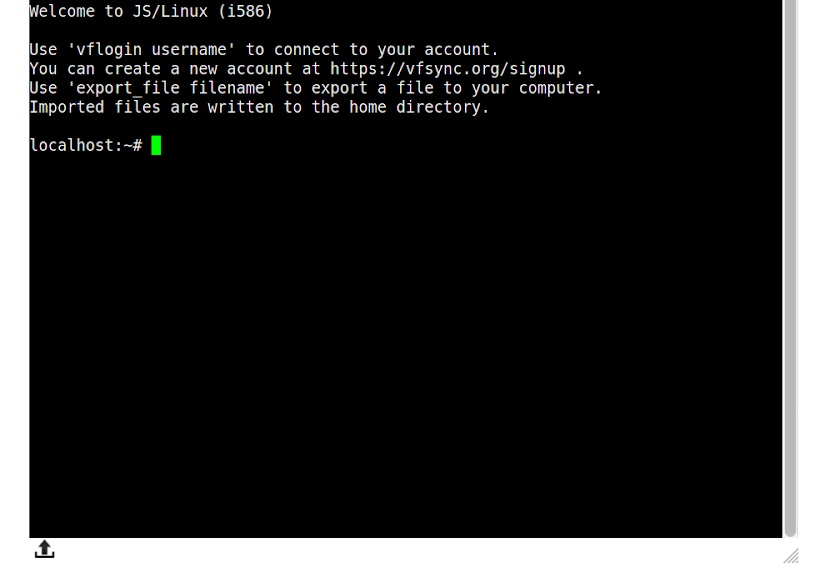 JsLinux online terminal supports both Linux and graphical Windows 2000 and is the best terminal for Linux. Linux operating system along with an online GUI is also available, in addition to terminal access. Instead of only providing you with a terminal, JSLinux acts as a complete Linux simulator. As the name implies, it is written entirely in JavaScript. You have the choice to use either a console or a graphical user interface-based Linux system. You can use the console-based setup to learn Linux commands in this situation. To do so, you need to first sign up.  You can also upload files to a virtual machine with JsLinux. Buildroot is at the heart of it. It's an online tool that you can use to create an end-to-end Linux server, especially for integrated systems. 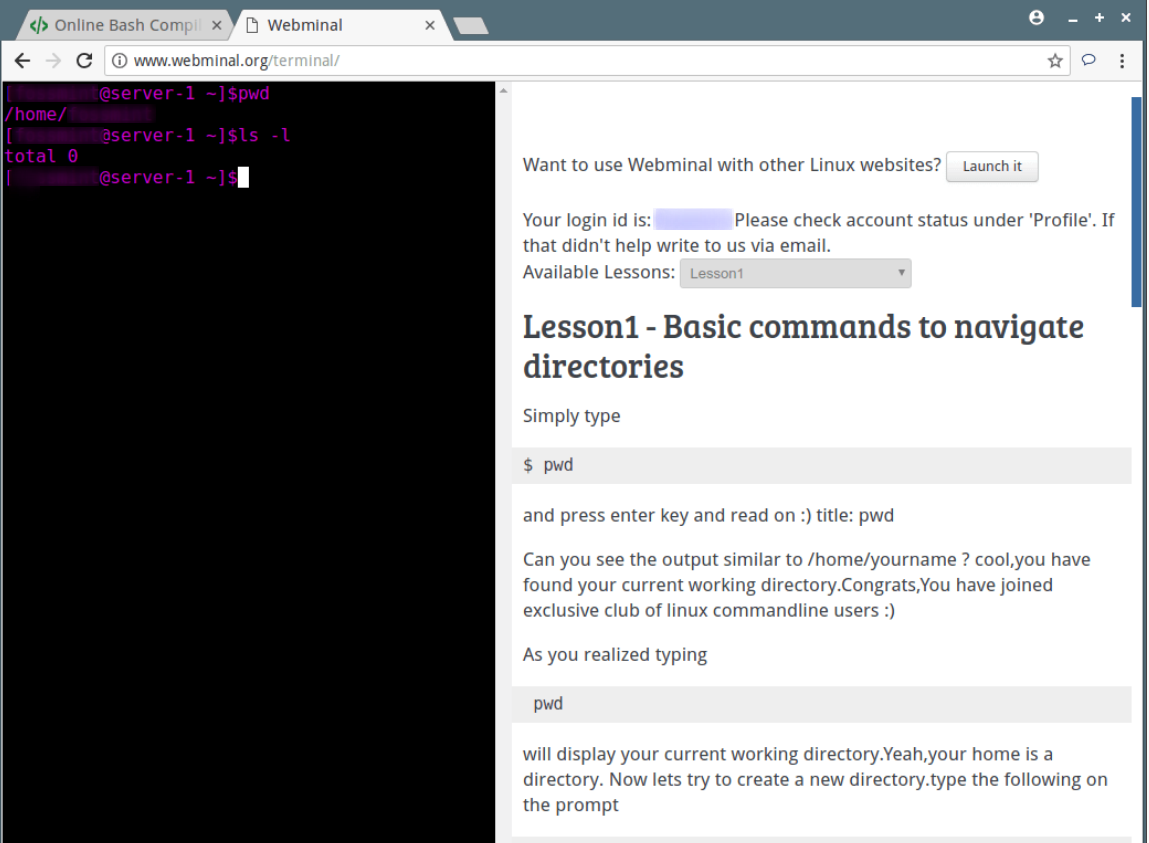 Webminal is among the best online Linux terminals for learning and practicing Linux commands. It runs as a container or virtual machine on the provider's remote server. To use Webminal, you must first set up a free account with them, after which you can access the free Linux terminal with root access from your browser. We can utilize it not only to use and learn Linux commands, but also to create bash files, learn MySQL, and practice coding languages, such as Python, using the Webminal IDE. The Webminal IDE online, on the other hand, is free for the first month, after which you must pay a nominal fee of $2 per month. When typing in the commands in the same browser, the website has many lessons to learn from. As a result, you won't have to go to another place for a lecture, then turn back or break the screen to learn commands. All is included inside a single-window tab.

Codeanywhere is simply the best Linux terminal available since it's a one-stop-shop web application hosted virtually that lets you control several Linux consoles and platform-independent cloud IDEs. It offers a fully-featured Linux virtual machine available online that runs in Ubuntu and CentOS containers. Root access is available, as well as complete control over the virtual machine and its setup. Codeanywhere simulates the use of Linux OS on a virtual terminal. It will connect to Dropbox, Google Drive, FTP servers, Amazon S3, and more to generate Droplets directly from the Codeanywhere terminal. You may make Ubuntu and CentOS containers also. The only drawback is that Codeanywhere is not a fully free online terminal. It offers a 7-day free trial and then costs $3 per month in the standard package with certain limitations on the functionality. The price, however, is reasonable and not a deal-breaker if you really want to learn Linux commands and practice them from anywhere using only an internet connection and a browser.

Tutorialspoint is a platform that helps users to learn various programming techniques and conventions for free. Also, it provides online coding environments and integrated development environments (IDEs) for its featured technologies. It has a flexible online terminal that, among other things, allows you to change the theme, font size, integrate with your Git account, and save your progress.

Copy.sh is one of the best terminals, allowing you to test and execute Linux commands quickly and reliably. Hosted on GitHub, it enjoys continuous support. When you first start the simulator, you have the option of selecting your preferred operating system and personalizing it to meet your needs. Copy.sh is similar to JsLinux in that it contains various operating systems that are hosted online and can be used as virtual machines in our browsers. Windows 98, FreeDOS, and Archlinux are available. Windows 98 has a GUI. On the other hand, we can use Linux in the full-screen mode.

Another free interactive online terminal for practice is JS/UIX, which is based on a UNIX-like OS written in JavaScript and runs in most browsers. It includes a Linux virtual machine, a virtual file system, an online Linux shell, and process control with its own terminal that can accept keyboard input.

Canonical's Linux Containers project aims to provide a distro and vendor-neutral framework for the advancement of container technologies. The linuxcontainers.org community is responsible for the development of LXC, LXD, and LXCFS. With a dedicated memory of 256MB and Linux Containers, you can simulate a server for up to 30 minutes. There are a few other limitations of using the demo server, which you can learn about on the demo tab.

CB.VU is a simple and free FreeBSD 7.1 emulator that allows you to learn Linux commands in your web browser. It's considered straightforward because it doesn't have any customization features. It doesn't allow you to save data or upload files. The browser and the commands are all you have while working with this online virtual Linux terminal. If you get stuck, use the "help" command.

Another best online Linux terminal is Virtual x86. For running Linux commands, it lets you choose among Arch Linux, Buildroot Linux, and Damn Small Linux. You can choose memory size and video memory size as per to your liking. There is no need to sign up or register to use Virtual x86. Besides Linux, you can emulate a range of operating systems, such as Windows 2000, Solar OS, and FreeBSD.

JDOODLE is among the virtual Linux terminal online for those looking for a bare-bones virtual Linux terminal. It is a minimalist online Linux virtual machine that lets you run Linux commands. You can choose either to sign up for using JDOODLE or continue without doing so. It lets you enter CommandLine Arguments and Stdin Inputs separately. Other than Linux, JDOODLE lets you run a wide array of programming languages, including C, C++, Java, and Python.

It's time to read, experiment, and play with some code now that you know about the best online Linux terminals and bash editors. Access the online virtual Linux terminal that caters to all your requirements and start programming in Linux. Happy learning! To learn more about the Best Linux Terminals and gain a deeper understanding, purchase this course. 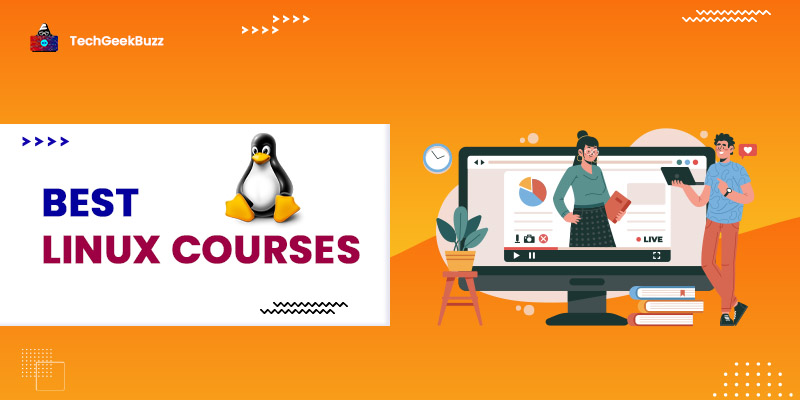 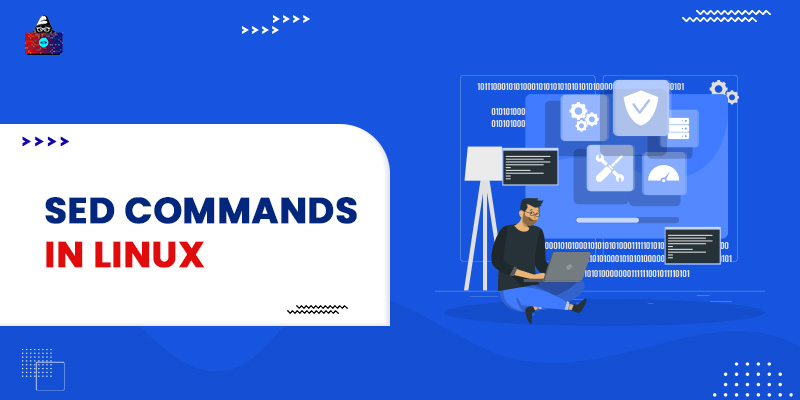 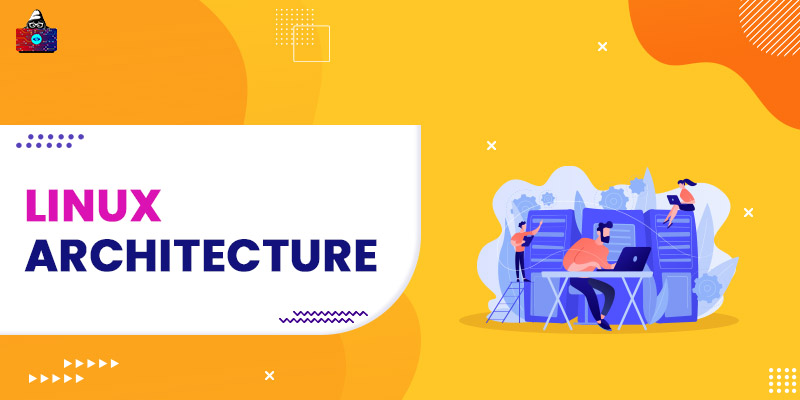