Firefox vs Chrome: Which Browser is Best? [Choose the Best] 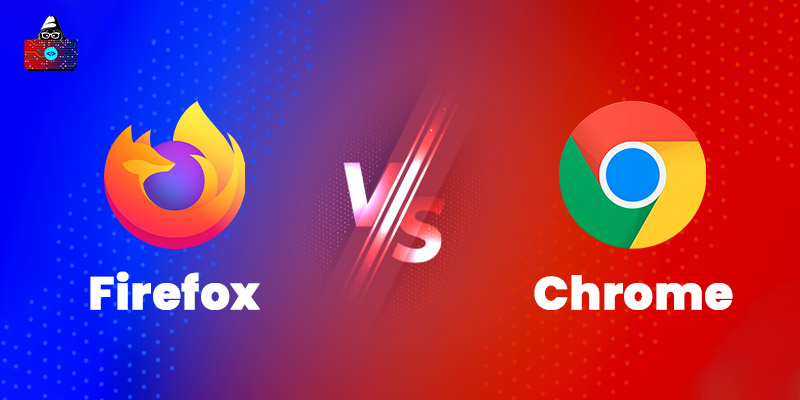 Chances are high that at any moment in time, you might have pondered over the popular Firefox vs. Chrome question; Who’s better among the two web browsers? Both web browsers are efficient and functional enough to be among the top web browsers, but if one has to be chosen, who should it be?

Well today, we are going to put an end to this discussion once and for all. Firefox vs. Chrome: The Face-Off begins here and now. Before kicking off the comparison, let’s first know the two contenders better.

Throughout the entire lifetime of the internet, there has been no shortage of web browsers. Commercial, free, privacy-oriented, there are so many of them. However, there have been only a few web browsers - such as Google Chrome and Internet Explorer - who have ruled the segment like no other.

Mozilla developed Firefox with the aim of making web surfing cooler and more enjoyable. The platform that was made perfect by Google Chrome was introduced first by Mozilla Firefox.

Difference between Firefox vs Chrome

So now that we have steered clear of the introductions, it is time to go in-depth for comparing Chrome and Firefox. Here, we go:

Both Mozilla Firefox and Google Chrome are two of the easiest web browsers to use. That’s why they are extremely popular. There are several aspects that contribute to a web browser’s usage level. This includes:

Firefox supports a very simplistic and intuitive user interface that is effortless to get accustomed to as well as navigate. The simple layout makes It fairly easy to find all the functions/tools you need while surfing the internet. Managing multiple tabs is also easy in Mozilla Firefox. The browser leverages horizontal scrolling when many tabs are open. Firefox features three options for browser tabs:

Sometimes, Firefox users come across websites that are rendered poorly. These are usually websites that are created solely for Google Chrome (and Chromium-based web browsers). Some old websites, however, might work better with Firefox than with Chrome, as most of these were developed prior to the advent of Google Chrome. Chrome also flaunts a smooth, attractive interface that is fully functional and highly responsive.

A vast majority of web browsers available these days are Chromium-based, so the Chrome UI is much more familiar than that of Firefox, which is unique. Although tab management is good in Chrome, too, one thing that it lacks is the tab scrolling option. This means that when you open too many tabs in Google Chrome, they get minimized.

On the contrary, Chrome has two great features at its disposal:

Chrome doesn’t support the sharing (tab) of other device features. Instead, they are saved in a tab menu and allow you to even sync Google Chrome on your desktop and mobile and other devices.

The Deduction : Both web browsers are easy-to-use, feature a clean interface, and feature a high level of usability. Each has its own distinct features too. Chrome, however, supports better features, like the image search option and tab menu. So, Chrome is the winner here, although marginally.

The most important aspect for some users while choosing a web browser is privacy. This depends on a range of factors, which are:

Mozilla Firefox, as a matter of fact, is designed with privacy in mind. Mozilla is a non-profit organization. Therefore, it doesn’t generate revenue with ads as Chrome does. This ensures that it can be trusted for everything that it says about protecting and keeping your data private.

Firefox’s privacy policy clearly states the kind of information it collects and what it uses the same for, and it doesn’t sell or share your data with third parties for any gains. On the privacy-oriented features front, Firefox offers superb, flexible tracking protection controls. Users can set their preferences individually for cookies, crypto miners, trackers, etc.

There are only a few issues with Chrome, and privacy is among the best - actually, worst - of them. Everybody knows that Google collects data to “make the experience better” for its users. It is just a polite way of saying that we collect data to give you relevant ads. The tracking protection of Google Chrome, however, is superb.

There have been quite a few issues that stained the reputation of Google Chrome in terms of privacy; may it be continuing to collect data even when the location services are turned off or it working with NSA’s PRISM program.

Chrome’s privacy policy is complicated as compared to Firefox’s privacy policy which is straightforward. This makes it difficult for some users to correctly understand what user information Chrome collects and how it uses the same.

The Deduction : Firefox clearly outshines Chrome in terms of privacy. In fact, many Firefox users prefer the web browser for this sole reason. Although both popular web browsers have strong tracking protection, Firefox offers way more control over it.

Just like privacy, security is also an indispensable aspect of web browsing. It can make or break a web browser deal. The security in web browsers pertains to:

Firefox features an inbuilt pop-up blocker. Although built-in ad blocking is not available, there are dozens of great pop-up blockers available on the Firefox add-on marketplace. The popular web browser from Mozilla leverages Google’s safe browsing database to keep users safe from accessing websites with identified unsafe content. It is turned on by default.

Other important safety features offered by Mozilla Firefox include:

Similar to Firefox, Chrome features a built-in pop-up blocker and a galore of third-party ad-blockers via the Chrome Web Store. Additionally, Chrome comes with a feature called Google Safe Browsing for blocking websites with malicious content. Unlike Firefox, Chrome issues a clear, instantly noticeable warning when you access a website over an HTTP connection. Chrome has an excellent built-in password manager and receives frequent updates that don’t require user action.

The Deduction : Both Chrome and Firefox are great for offering a secure operation to users. Chrome, nonetheless, gains the upper hand over Firefox for two main reasons:

Both Google Chrome and Mozilla Firefox offer a good level of customizability. Both have their in-home app and extension stores. But when compared, Chrome has a bigger web store. This is, of course, so due to the vast market penetration by the aforementioned. In fact, Google Chrome has no competitor when it comes to offering add-ons and extensions. Firefox’s web store, although smaller but has great quality it.

Therefore, Chrome gains the upper hand when it comes to customization over Firefox, theoretically. Is it really the case, no. There isn’t much that you can do to customize the look and feel of Google Chrome. Some of it is available via third-party extensions. The same is true for Firefox. However, it allows rearranging most of the UI elements to your liking. Chrome doesn’t have this feature.

Chrome allows users to define different user profiles to keep it private while sharing the web browser with many people or using the same for different purposes, such as using it differently for working and watching Tekken 7 tournaments on YouTube. Other features of Chrome include:

Firefox also has a few handy inbuilt features, which are:

The Deduction : Both web browsers even it out when it comes to features and customization. Firefox performs slightly better in the context of the latter. Chrome, however, outshines its adversary in online marketplace size. While Chrome wins over Firefox in terms of offering multi-user support, Firefox gains an advantage in its mobile version and offers a longer feature list.

Google Chrome easily outshines Mozilla Firefox in terms of flaunting a tighter integration with the galore of Google tools and platforms, such as Gmail, Google Docs, and Google Translate. Firefox, although it offers a good level of compatibility with the same, it’s not as streamlined as that Chrome.

The performance of a web browser is determined by three main factors:

Whether it’s mobile or desktop, Firefox runs fast. It is, in fact, among the fastest - and most secure - web browsers. Though Firefox requires intensive RAM consumption, i.e. RAM usage is high, it does extremely well under heavy usage conditions, such as smooth working even when 20 or even 30 tabs are open.

Paradoxically, Firefox does so by sufficiently running a single tab using fewer resources than what other web browsers usually require. It doesn’t have a data saving mode. However, turning off/disabling images on mobile is available.

Chrome is also a fast web browser on all platforms it supports, but especially faster on desktops. RAM consumption, however, is much too high. This has, in fact, been the pivotal reason for disapproving Google Chrome usage in debates and comparisons with other web browsers. Mobile or desktop or some other platform, Google Chrome has no data-saving functionality whatsoever.

The Deduction : Both web browsers are fast, no doubt about that. Although Chrome is slightly better on desktops, Firefox gains the lead when running on mobiles. Both are, nonetheless, CPU-intensive applications. Still, Firefox comes out on top in terms of performance when even multiple tabs are running. P.S. - Firefox is preferred for mobiles:

By comparing the two popular web browsers, we can deduce that:

Chrome rules the market share, but Firefox holds its ground, well, though! Both Firefox and Chrome are two popular web browsers on both desktop and mobile. Regardless of your choice, you’ll get the best experience that you can get while browsing the vast oceans of the web. Each has its own solid reasons for existing, which is why they both are doing extremely well and looking to keep up the good work in the future.

Which one do you choose? Firefox or Chrome? Or Tor or Edge? You can just say, share it in the comments section below. Maybe someone will find it much too interesting to have a conversation started with it; again, just saying!

Google Chrome is faster than Firefox in terms of rendering web pages as it is always active and consumes a lot of RAM and CPU.

Firefox is a more secure and private web browser than Chrome.

Each browser has its own strengths and weaknesses. However, the ultimate choice depends on personal preference. Firefox is a better option when it comes to resource utilization, whereas Chrome is faster in rendering web pages.

Hackers primarily leverage Firefox or Opera to conduct and defend themselves against malicious attacks.