Linux vs Windows: A Head-to-Head Comparison 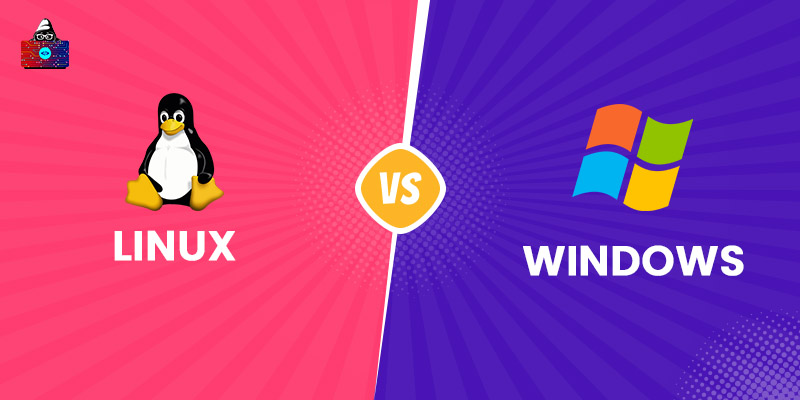 Linux vs Windows is a hot topic for debate. Which one is better among the two most popular operating systems? Continue reading to find out!

A person who is using Windows for the usual work, such as surfing the internet and/or working with docs and excel files would not prefer to switch to Linux. This is because Windows provides a beautiful and easy-to-use UI.

On the other hand, Linux has some complex file system management and most of the work on Linux is done by using terminal commands, which could be difficult for a typical Windows user to handle. But when it comes to programming and computer science, Linux becomes the no. 1 choice for professionals and developers. The Linux operating system is even used by servers, and thus, most of the webpages run on the Linux servers.

As such, having knowledge of Linux also becomes very important for a web developer. However, Windows also comes in a server-specific variant called Windows Server, and it is also one of the popular operating systems for servers.

Here in this article, we have provided a detailed comparison between Linux and Windows (Linux vs. Windows), so you can decide whether you want to stick with your present OS or would like to switch to the other one. But before that, let's know a brief about the 2 contenders, along with their features, pros, and cons.

Windows is a series of operating systems owned by Microsoft. It enables users to store their data, run various types of software, connect to the internet, play games, watch videos, and do many other activities. It is one of the widely used operating systems, where 90% of PCs run some version of Windows.

Microsoft released the first version of Windows in 1985 as an extension of its existing disk operating system called MS-DOS. Later, it released multiple versions with additional features, including access to Microsoft Excel, Microsoft Word, and many others. The company then released Windows 95 in the same year and ruled the world of operating systems.

Then there were a few upgrades to Windows 95, which turned out to be Windows 98 and was released in 1998. The year 2000 witnessed the release of Windows AMD and CE. In the following year, the company released Windows XP. After a gap of five years, in 2006, Microsoft released Windows Vista. In 2007, the company introduced Windows 7, which was one of the most popular Windows versions.

The following are some significant features of Windows:

The following are some major advantages of Windows:

Some significant downsides of Windows are:

Linux is an open-Source, free-to-use operating system based on UNIX. Linux's first version was introduced in 1991. Like Windows, Linux is also a GUI-based operating system, but most of its important work is done with terminal commands. Linux is used for cloud computing, embedded devices, mainframe computers, mobile devices, personal computers, servers, and supercomputers .

Amazingly and unlike Windows - Linux isn't an OS. In fact, it is a kernel. Popular Linux distributions include Debian, Ubuntu, and Fedora Linux. Moreover, there are commercial distributions of Linux, such as Red Hat Enterprise Linux and SUSE Linux Enterprise.

Finnish software engineer Linus Torvalds and the Free Software Foundation (FSF) created the Linux operating system in the early 1990s. While Torvalds was a student at the University of Helsinki, Finland, he started developing Linux to create a system similar to UNIX. He then released version 0.02 in 1991. Initially, Torvalds published the Linux kernel under his own license, which was restricted for commercial use. In 1992, he released Linux kernel using the GNU General Public License.

Here are some notable features of the Linux operating system:

Some major advantages of the Linux operating system are, as listed below:

To make the Linux vs Windows comparison easier to comprehend, we've divided it into sections:

Linux vs Windows: Why You Should Choose Linux over Windows?

That sums up this discussion on Linux vs Windows. To conclude, Linux is more secure and reliable than Windows. On the flip side, Windows is more user-friendly and easy to use, which makes it more popular than any other desktop operating system. Yes, there are some shortcomings of Windows, yet, it has successfully maintained its position in the market by delivering an excellent user experience.

For a normal user, Linux may be of no use, but programmers and developers prefer Linux for its security and customization. Many people who work with computers do not know anything about Linux, because the earlier versions of Linux were very complex to use. Windows, however, is almost known to everyone.

While Linux is an operating system that provides security and excellent speed, Windows is good at providing comfort and ease of use, particularly intended for non-tech-savvy users.

Yes, Linux is faster than Windows for many reasons. Linux is a lightweight OS, and file organization is very clean, enabling faster reading and writing of data. Meanwhile, Windows is not lightweight as a number of processes that run in the background consume a lot of RAM. Also, files in Windows are not organized and are present anywhere.

There are many things that Linux can do but Windows can't. Some of these things include testing a distro, choosing from a range of distros, using the OS free forever, using the OS without antivirus software, not requiring to restart the PC at every step, and customizing ay component of the OS.

We can use Linux as server OS for file servers, web servers, email servers, database servers, and any other types of shared server.