R vs Python: What's the Difference? 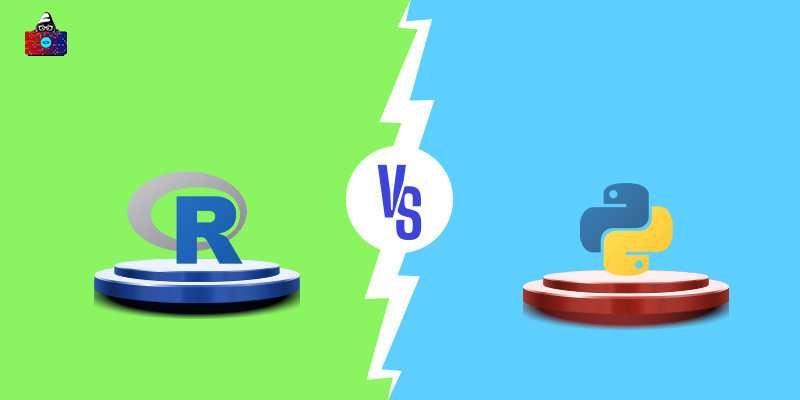 Nonetheless, for data science, most professionals prefer working with Python and R languages. However, beginners often find it difficult to decide if they should learn Python or R to get started with their career in data science.

R is a programming language employed widely for statistical computing and graphics. Data miners and statisticians primarily use the R language for data analysis and creating statistical software. It is analogous to the S language and comes with several statistical and graphical techniques.

More interestingly, R is also a free and open-source software environment that runs on Windows, macOS, and Linux platforms. It is a collection of tools that facilitate data manipulation and calculation. The major tools the R environment provides are for carrying out the following tasks:

Initially, R was used for academics and research purposes. However, as enterprises required a tool that could help them to handle huge amounts of data, R emerged to be the best option. Also, R comes with a large number of packages that make it quite easy for data scientists to process the data efficiently.

Let us now throw light on the features of the R language and the R environment.

The following are the advantages of R:

Here are some major drawbacks of R:

It is a general-purpose and object-oriented programming language that is suitable to use in a variety of fields, including web development , AI development, and data science. The language's built-in data structure, dynamic typing, and a vast collection of libraries make it a popular language for the development of applications, data analysis, data visualization, and task automation.

Python is also one of the most preferred languages among data scientists as it offers functionality to deal with statistics, mathematics, and scientific functions. Like R, it can perform various data science operations using libraries like NumPy and SciPy. It even has libraries like matplotlib, which is capable of visualizing graphs.

The language provides us with simple syntax and amazing libraries so we can run complex data science algorithms with ease. Though Python does not contain as many statistics packages as R, each update for Python is intended to make it more powerful and feature-rich.

Guido Van Rossum, in 1991, released Python 0.9.0, the first version of Python. He released it as a successor to the ABC language. Later, in 2000, he released Python 2.0, which was a more improved version. It included new features, such as list comprehensions, garbage collection, and reference counting.

The following table describes the key differences between R and Python:

R vs Python - Which One To Choose?

Both the programming languages, R and Python, have their own set of features, pros, and cons. While Python is a general-purpose programming language, R is specially designed for statistical computing and graphics. Python is a good-to-go language for web and desktop applications development, task automation, data analysis, and data visualization. Meanwhile, R is ideal for statistics, data science, and analytics.

Therefore, the choice between Python and R entirely depends on your project's requirements. Choose R for statistical learning as its offers unmatched libraries for data exploration. On the other hand, go with Python if you wish to build machine learning models and large-scale applications.

However, developers with a keen interest in data analysis and statistics always suggest choosing R because of its packages. Apparently, it is the choice of an individual whether to go with Python or R programming language.

We hope that this Python vs R article has helped you understand all the crucial differences between the two so that you can easily choose the one that seems the best as per your requirements.

If your only requirement is data analysis and visualization, R is a perfect choice. Python is a versatile language and can be employed for a variety of purposes, including data analysis, task automation, software development, and web development.

Yes, Python is easier to learn than R because of its simple syntax that eliminates the need for delimiters, like curly brackets and semicolons. Meanwhile, R has a completely different syntax than other programming languages and hence, has a steep learning curve.

Yes, it is possible for Python to do everything R can do and vice-versa.

Yes, it is absolutely worth learning Python as it is a versatile language and ranks top in the list of popular programming languages. When you learn Python, you open up yourself to a variety of job opportunities.

Yes, it is worth learning R since it is the most common language among data scientists. It is a language used for working with data, and as data is the new oil, learning R would be definitely beneficial.