Tree vs Graph: Notable Differences You need to Know 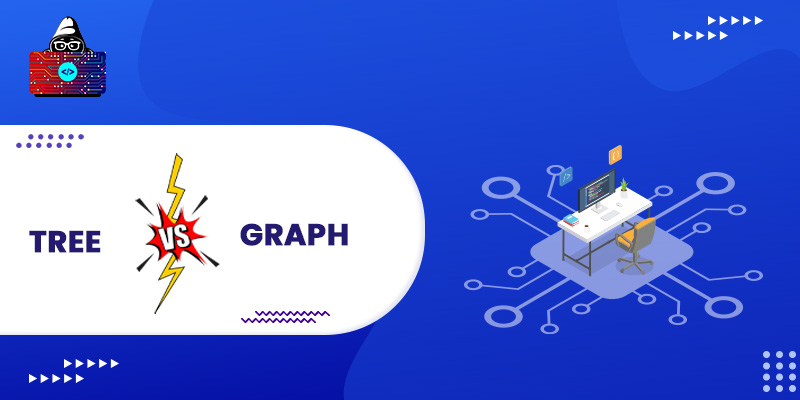 Here in this article, we have compared these two popular data structures so you can find the differences between the two.

Differences Between Tree vs Graph

Before starting tree vs graph, comparing both the data structures, let's have a look at the non-linear data structure, whose types are tree and graph.

In a non-linear data structure, elements are not stored sequentially. Though there would be a relation between two elements and each element points to some other element but they are not sequentially organized.

There are two types of non-linear data structure:

A graph is also a non-linear data structure. It is a collection of two sets; vertices and edges, where vertices are the nodes and edges are the set of elements that connect the two vertices. The graph data structure follows a network model to represent its structure and the network model can form a closed loop. There are many types of graphs and how the vertices are connected with edges depends upon the specific type of graphs.

Properties of a Graph

Here we have jotted down a head-to-head comparison between Tree vs Graph in tabular form.

That the end of the Tree vs Graph discussion; Also the difference between tree and graph. To sum it up, although both trees and graphs are non-linear types of data structure, the tree data structure follows a proper structure whereas there is no specific structure followed by a graph. Every tree can be a graph but not vice-versa. The graph data structure is mostly used to solve real-world problems, such as the traveling salesman problem.

On the contrary, Google maps use the graph data structure and its searching algorithms to show the best path to its user. Trees are mostly used in arranging data. There is a subtle difference between a tree and a graph, and in interviews, the difference between these two is often asked.

Both a tree and a graph are non-linear data structures consisting of nodes and edges. The primary difference between the tree and the graph is that the former has a unique node called root, while the latter does not.

You can traverse a tree using in-order, pre-order, or post-order traversal methods.

Yes, an undirected graph can be a tree only if it meets the two conditions: 1. There is no cycle 2. The graph is connected.

Yes, every tree is a graph, but every graph is not a tree.