What is Python Pickle Module? 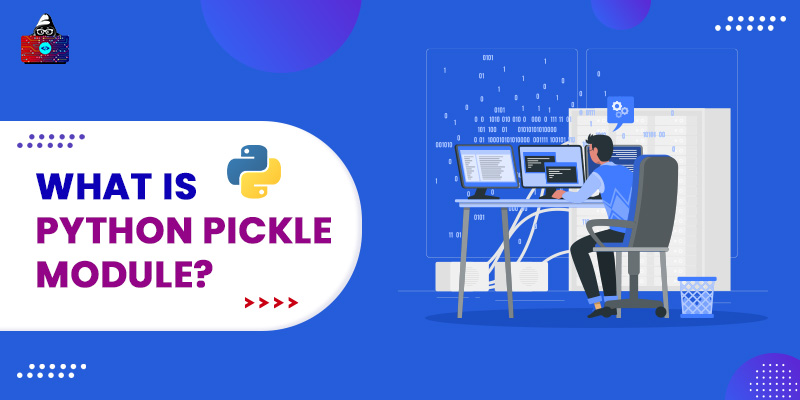 We all love pickles, the way a pickle is made by preserving the main ingredient for a period of time. The concept of preserving is the main idea behind every type of pickle. Similarly, Python also uses Pickling to persevere or store Python objects , generally also referred to as Python picking, serialization, marshaling, and flattening.

What is Serialization in Python?

When we want to transmit data from one resource to another or one network to another, we need a data format that can easily be transmitted over memory or networks. A Python object or data can not be transmitted directly, so we convert that data into a stream of bytes and store it using a process called Serialization.

What is de-serialization in Python?

What is Pickle in Python

Pickle is one of Python's standard Libraries that is used to serialize and de-serialize Python objects. Pickle can serialize any Python data object into a byte stream, including list, string, tuple, dictionary, function, class, etc., and revert back them into Python object using de-serialization.

JSON "JavaScript Object Notation" is one of the most serialized data formats to send data over networks. Almost every programming language supports a library or a data format to serialize its data objects to JSON format. Python also has a standard JSON library that can serialize and deserialize Python objects to JSON format and vice versa. But the difference between JSON and Pickle are:

Python Objects that can be Pickled and Unpickled

Here is a list of Python data objects that can be serialized and deserialized using the Python Pickle library.

Let's begin with pickling (serializing) a Python list into a pickle_file.pkl . Create a pickle_list.py Python script and code along.

In the first line, we imported the pickle module using the import pickle statement. Pickle is a Python standard library, so we do not need to install it separately. We can directly use it on our Python script. Then we define a List object by name fruits_list which is a list of fruits.

The filename identifier holds the fine name of the Pickled list. Using the Python context manager, we open the file filename in write binary mode 'wb' as a file object pickle_file .

After executing the program, you will find a file with a filename pickle_file.pkl will be created in the same directory where your Python pickle_list.py is located.

Now let's create a new Python script by the name unpickle_list.py and deserialized and read the data that we created and stored in the above example as pickle_file.pkl . #unpickle_list.py

Break the code To deserialize the 'pickle_file.pkl' file, we first open the file and read the data in binary mode using 'rb' . Then using the pickle.load() function, we de-serialized the pickle_file file serialized data.

To serialize and store any Python object, we first need to open the file in binary write mode "wb" and serialize the Python data object using the Pickle dump() function. The dump() function serialize the Python data object and writes the serialized data into a .pkl file in a binary format that can be easily read and transmitted later. To deserialize and read data from the .pkl file we first need to read the data in binary format using the "rb" mode, then deserialize data using the Pickle load() function.

However, Pickle's serialized file makes it easy to send the data over the network and does not confuse pickling with compression. Compression is used to encode data to reduce disk space, whereas serialization is only used to translate data for better transmission.

The Python Pickle module is one of the ways to serialize and deserialize Python objects. It is in contrast to the JSON module, wherein it serializes objects in a binary format, which is not understandable by humans.

The primary benefit of using the Python pickle module is that it enables you to serialize any Python object without the need to write extra lines of code.

As JSON is lightweight, it is pretty much faster than Pickle. In addition, Pickle comes with a security risk. On the flip side, JSON is always free from external threats.

To read the Python Pickle file, you can leverage the Pandas library, as it has the read_pickle() method.

You can pickle any object in Python so that you can save it on the disk. What pickle does is that it serializes the object before writing it into any file.