C# vs Java: What Makes them Different? 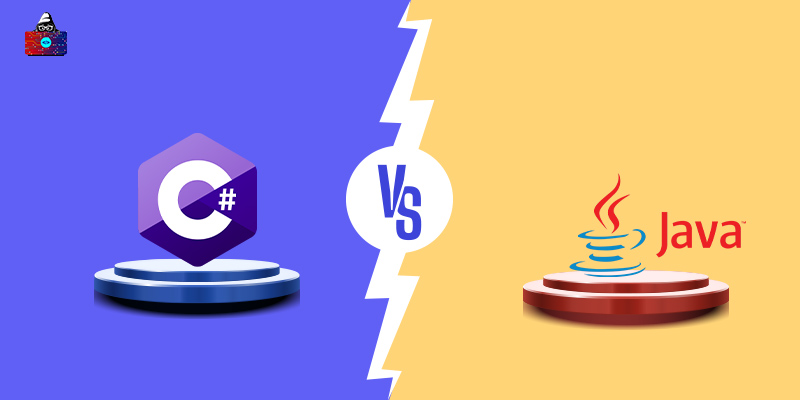 C# and Java are both object-oriented and general-purpose programming languages, and they have many features in common. These common features are as follows:

Many times, the similarities between C# and Java make it difficult for developers to choose one programming language over the other. However, C# and Java have a lot of differences too, and one may consider them if they want to make a sound choice. This article will walk you through the major differences between Java and C# programming languages. In addition to it, this article intends to provide a brief overview of C# and Java languages, along with their history, features, advantages, and disadvantages. So without further ado, let us begin!

C# is a general-purpose, type-safe programming language and is pronounced as C Sharp. It follows multiple programming paradigms, such as object-oriented, structured, imperative, event-driven, functional, task-driven, and declarative. It enables developers to create various applications that run on the .NET framework. Having its origin from the family of C languages, C# is quite familiar to C, C++, Java, and JavaScript programming languages. The ECMA standard has specified certain design goals for C#, and they are as follows:

During the development of the .NET framework, developers used a managed code compiler system called Simple Managed C (SMC) for writing class libraries. Later in 1999, Anders Hejlsberg at Microsoft started designing a programming language with his team and named it Cool, which stood for C-like Object-Oriented Language. But Microsoft thought that the name ‘Cool’ was not good for trademark reasons. While the .NET framework was announced publicly at the July 2000 Professional Developers Conference, Microsoft renamed it to C#. Later, many personalities, like James Gosling, the creator of the Java language, Klaus Kreft and Angelika Langer, the authors of C++ stream books, commented that Java and C# are identical and C# has borrowed many features from Java. But Hejlsberg stated that C# is not a clone of Java and its design is much identical to C++. In November 2005, Hejlsberg released version 2.0 of C#, and then C# and Java evolved on two different paths, becoming two different programming languages. The major difference between these two was the addition of generics with different implementations. C# used reification to provide generic objects. Thereafter, multiple versions of C#, such as 3.0, 4.0, 5.0, 6.0, 7.0, 8.0, 9.0, and 10,0 released, and the latest and stable version of C# is 10.0.

C# offers various features that make it possible for developers to build secure and robust applications. Some of those features are as follows:

Here are some significant upsides of C#:

Some of the main downsides of C# are:

When to Choose C#?

C# is a versatile language that lets developers build almost anything. But it is very robust at building Windows desktop applications and games. In addition, you can also use C# to develop web and mobile applications. It is also an ideal language for developing backend services, Azure cloud applications and services, and game engines.

Let us write a simple C# program for printing a single statement.

Java is a high-level, object-oriented, and class-based programming language. It follows multiple programming principles, including object-oriented, functional, imperative, concurrent, and generic. In addition, it is a general-purpose programming language that works on the WORA principle. WORA stands for Write Once, Run Anywhere. It implies that Java code compiled on one machine can run on all other Java-enabled machines without requiring to recompile it. Java code is converted into bytecode and not directly into the machine code. Therefore, that bytecode file can run on any system that has Java Virtual Machine (JVM). The Java language was developed based on the following five principles:

James Gosling at Sun Microsystems developed Java and released it in 1995 as the core component of Sun Microsystems’ Java platform. Java was initially called Oak, which was named after the oak tree outside Jame Gosling’s office. Later, it was called Green, and finally, it was renamed Java. It got its name from Java coffee, a type of coffee from Indonesia. Sun Microsystems made the first implementation of Java public as Java 1.0 in 1996. In a very short time, Java became an immensely popular language due to its popular features, such as WORA and no-cost run-times on popular platforms. Later, the company released multiple versions of Java, such as Java 1.1, 1.2, 1.3, 1.4, 5.0, 6, 7, 8, 9, 10, 11, 12, 13, 14, 15, 16, and 17. The current and stable version of Java is Java 17.

Some salient features of Java are:

The following are the benefits of Java:

Some popular drawbacks of Java are:

When to Choose Java?

Developers mostly prefer Java as a server-side language for back-end development . Since Java is a general-purpose language, you can use it to build a variety of applications, including mobile, desktop, distributed, cloud-based, gaming, and IoT applications.

Let us write one simple Java program for printing a single statement.

The following table draws all the key differences between C# and Java:

C# vs Java: Which One to Choose?

Now that we know the key differences between C# and Java, it is time to decide which one to choose. C# is a versatile and code-oriented programming language, which is ideal for developing Windows applications, video games, web applications, enterprise software, and cloud-based applications. Java is well-known for its security and high-level concurrency, and hence, it is widely used to develop governmental and scientific applications. Moreover, it is used for building web-based applications, Android applications, data centers, IoT applications , and distributed applications. As a result, depending on the nature of your project, you can select either Java or C#.

C# and Java are both popular languages that came into existence in the 90s with a few similarities and many differences. Java is a popular programming language known for its security, concurrency, and portability features. On the flip side, C# encourages code reuse and provides many built-in functions to help you code better. Choosing Java would be a great move for developing web, Android, and scientific applications, whereas C# is ideal for developing Windows applications and video games. We hope this article has helped you learn the differences between C# and Java. Also, you can post your queries or suggestions in the comments section below.