Flutter vs Xamarin - Which is Better for Mobile Development? 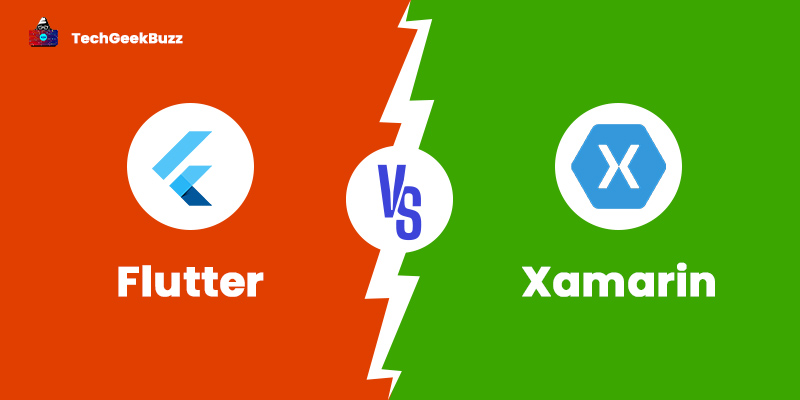 If you are perplexed in choosing between Flutter and Xamarin for mobile application development, this article is for you.

Flutter is an open-source framework for developing mobile applications that can work on any platform and devices of any screen size using a single codebase. We can also refer to Flutter as a UI toolkit that lets developers build applications for Android, iOS, Google Fuchsia , Windows, macOS, Linux, and web, from a single codebase.

This means that there is no need to write the source code separately for different platforms, which significantly saves time and effort. Besides mobile app development, you can also create desktop, web, and embedded applications using Flutter.

Since Google has developed the Flutter framework, it uses the Dart programming language , which is developed by Google for the development of web and mobile applications.

In the 2015 Dart Developer Summit, Google unveiled the first version of Flutter as ‘Sky’. This version was capable of running only the Android platform. Later, in September 2018, at Google Developer Days, the company announced the last major release of Flutter, i.e., Flutter Release Preview 2, before Flutter 1.0. At the Flutter Live event in December 2018, the company released Flutter 1.0.

In just a year, Google released Flutter 1.12 at the Flutter Interactive Event. Along with the release of Dart SDK version 2.8 in May 2020, the company released Fluter 1.17.0, which added support for the Meta API and improved the performance on iOS devices.

Within a year, during an online Flutter Engage event, Google released Flutter 2, which was the major update to Flutter. This version added support for web-based applications with a CanvasKit renderer and desktop applications for Windows, macOS, and Linux platforms. In addition, Flutter 2 leveraged Dart 2.0.

Further, in 2021, Google released Dart 2.14 and Flutter 2.5. This version supported Google’s Material Design and enhanced the Android’s full-screen mode. As of now, the current version of Flutter is 3.0.1, and that of Dart is 2.17.1.

The following are some well-known features of Flutter:

The following are the remarkable benefits of using Flutter:

Some significant downsides of using Flutter are as follows:

Xamarin is an open-source framework for creating modern mobile applications using the C# language and .NET framework. With this framework, developers can write native Android, iOS, and Windows applications and native user interfaces. Like Flutter, Xamarin also enables developers to write the codebase only once and use it for different platforms.

If you have a basic understanding of .NET and experience working with Visual Studio, it is pretty easy to build applications in Xamarin. You do not need to learn any new programming language, like Flutter uses Dart, while working with Xamarin.

In 2011, the developers of Mono, which is an open-source .NET framework, created Xamarin. After a year, Xamarin released Xamarin.Mac, a plugin for an existing MonoDevelop IDE. This IDE enabled developers to build C#-based applications for the macOS platform.

Later, the year 2013 witnessed the release of Xamarin 2.0, which included two major components: Xamarin Studio and the integration with Visual Studio. In 2016, Microsoft announced the acquisition of Xamarin. After the acquisition, the company made Xamarin SDK open-source and integrated Xamarin with Visual Studio, an open-source IDE for building applications for Windows, Android, and iOS.

The salient features of Xamarin are as follows:

The following are some noteworthy advantages of using Xamarin:

Here are the significant downsides of using Xamarin:

Flutter vs Xamarin - A Head-to-Head Comparison

The following table highlights the key differences between Flutter and Xamarin:

Flutter vs Xamarin - Which is the Right Choice?

However, the ultimate choice between Flutter and Xamarin entirely depends on the project requirements and personal preferences. We recommend you go through the pros and cons of each framework and then choose according to your requirements.

Yes, Dart is easy to learn since its syntax is more similar to C# and Java.

If you already know C# and have a basic understanding of Visual Studio, developing applications in Xamarin is easier. When it comes to Flutter, you need to learn the Dart language. However, when you learn it, you feel Flutter more comfortable.

Yes, it is worth learning Xamarin for cross-platform mobile app development. It leverages C# and the .NET framework, which are trustworthy and demandable technologies.