React vs Vue - A Detailed Comparison 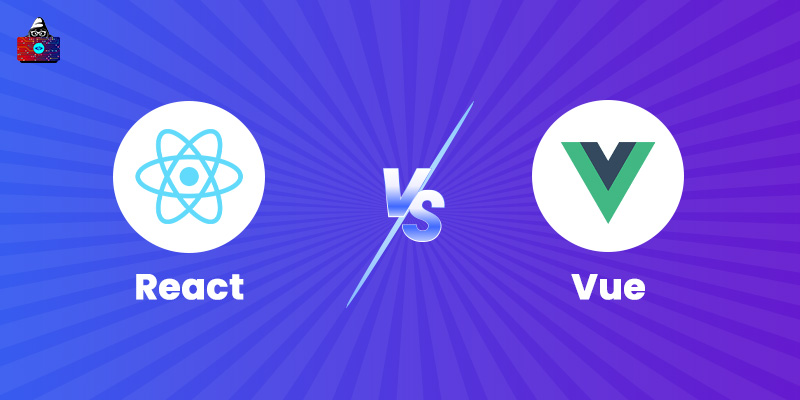 React, also known as ReactJS or React.js, is an open-source front-end Javascript library for developing user interfaces. We can use React for developing mobile as well as web applications. However, this library is only concerned with the state management and rendering that state to the Document Object Model (DOM). Therefore, the React library alone is not sufficient for developing full-fledged web applications. We need other JavaScript libraries for various purposes, like routing or adding some client-side functionality. Jordan Walke, a software engineer at Meta (formerly Facebook), first released an early prototype of React called “FaxJS”. He got inspired by XPH, an HTML component library for PHP, and created React. In 2011, Jordan deployed React for the first time on Meta’s News Feed and later used it for Instagram in the following year. The latest version of React is React 17.0.2, which was released in March 2021.

The following are significant advantages of React:

Here are some of the main downsides of React:

Vue is an open-source front-end JavaScript framework for developing single-page web applications and user interfaces. It follows the model-view-viewmodel (MVVM) architectural pattern. This framework has an adaptable architecture that concentrates on declarative rendering and component composition. The official packages and libraries of Vue offer various features, such as routing, build tooling, and build management, to make it easy to create complex web applications. In addition, it allows us to extend HTML with HTML attributes called directives. We can also use the Vue framework for developing mobile and desktop applications by integrating the Electron framework. Evan You created Vue after he worked on multiple projects using AngularJS at Google. He thought of developing something that has all the good parts of AngularJS and should be lightweight, and in 2014, Vue was released. The latest stable version of Vue is Vue 3.2.20.

The following are the benefits of Vue:

Below are some drawbacks of Vue:

React vs Vue - A Head to Head Comparison

The following table highlights the key differences between React and Vue:

React vs Vue - Which One to Choose?

Many web developers get perplexed in choosing between React and Vue since both are popular and have exceptional capabilities. Each of these technologies has its own use cases. We shall discuss the use cases of React and Vue below, which can help you make a better choice.

Use React if you want to:

Use Vue if you want to:

To sum up, React is more popular among web developers. It has a large and active community that offers active support to developers. Also, it is ideal for developing complex and enterprise-grade web applications. On the flip side, Vue is still pretty much under development and is gaining popularity due to its ease of use. It is ideal for developing single-page applications or progressive web applications. Hopefully, you have understood all the major differences between React and Vue that can help you make a sound choice.