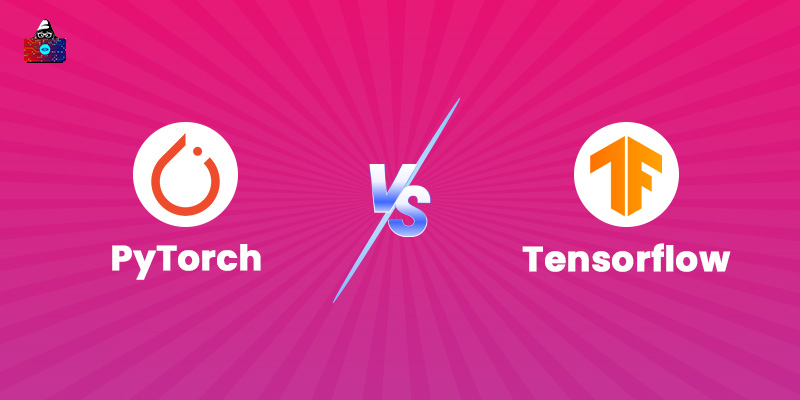 Right now, Python is heavily used to build and train deep learning models, and in the domain of Python deep learning, there are two frameworks that are leading the market, PyTorch, and TensorFlow. Choosing one of the two requires you to study PyTorch vs TensorFlow. However, if you are thinking of taking a dive into the ocean of deep learning with Python, you have to use one or both of these libraries, eventually. Although there are many deep learning frameworks and libraries in Python, most of them are dead or not used by professionals for research and deployment of deep learning models. Deep learning is a subset of machine learning that mostly focuses on deeply interconnected networks known as neural nets. With the advancement in recent computational resources and big data, deep learning applications also get hyped and boosted. Deep learning allows us to improve the performance of complex and conventional machine learning algorithms using a neural network. Here in this article, we will compare the two popular Python deep learning frameworks so you can pick the best one for yourself. Another reason for specifically comparing these two ML libraries is their parent companies. Both the frameworks are backed up by two top tech giants, Google and Facebook. Also, both use their respective ML frameworks to implement real-world applications.

PyTorch is built with Python, and it is the successor to an old scientific computing framework called Torch . That’s how it gets its name. It was developed by Facebook and initially released in 2016. One year after the release of TensorFlow, Facebook used this framework for its image recognition models and many other projects. PyTorch is a well-written library and highly compatible with Python, and this is one of the main reasons why it is popular among Python deep learning engineers.

TensorFlow is an open-source deep learning framework developed and managed by Google. Ever since its release in 2015, Google has used this framework to build many real-world applications. Apart from Python, TensorFlow is also available for other programming languages like JavaScript and Swift . Its name itself defines the data structure and operations it follows. TensorFlow uses the tensor data structure to form static and stateful graphs. Moreover, these tensors are the building blocks of neural networks. The initial release of TensorFlow was not that much Pythonic, which declined its popularity when PyTorch was introduced by Facebook in 2016. However, in 2019, Google released TensorFlow 2.0, in which they provided updates to reduce the complexity of building deep learning models with TensorFlow.

So now that we know what the two popular machine learning libraries are about, it's time to compare the two. To make the PyTorch vs TensorFlow discussion legible, we have divided it into several parameters, which are as follows:

Designed especially for Python, PyTorch is the successor to Torch. TensorFlow was developed by Google, and it is not exclusive to Python. The initial release of TensorFlow was available for only two programming languages, C++ and Python. Now, JavaScript and Swift can also use TensorFlow. The Google brain team designed TensorFlow while keeping Theano in mind.

PyTorch is native to Python, and building deep learning models on PyTorch is comparatively easy as compared to TensorFlow. For a beginner, TensorFlow can be overwhelming. Before using TensorFlow, you need to learn concepts like tensors and variable objects.

A neural net is represented as a graph with edges and vertices. PyTorch defines dynamic graphs that can be modified and changed during the runtime. This gives PyTorch an edge over TensorFlow, and because of high compatibility with other Python libraries, NumPy can be used to define graphs for PyTorch. TF, on the other hand, uses static graphs, and this is one of its drawbacks. Once you have defined the graphs, you cannot manipulate their value during the runtime.

As graphs are dynamic in PyTorch, this also helps in making debugging easier. Also, due to its high compatibility with Python, Python debugging tools like pdb , PyCharm debugger , and ipdb can also help in debugging. Debugging is not easy in TensorFlow, and the static graph makes it even harder. Moreover, TensorFlow is not native to Python. Therefore, you can not use native Python tools to debug your TensorFlow model. However, you can install TensorFlow tfdb tool to debug your model.

Visualization tools can also be used for debugging the models. PyTorch does not come with a visualization tool. Instead, it uses matplotlib to visualize its model graph. Contrarily, TensorFlow comes with a built-in visualization utility, TensorBoard. Using TensorBoard, you can represent your model in different formats, varying from displaying model graphs to playing audio.

PyTorch is designed for distributed computing systems. Also, it can run data parallelly and increase its data processing performance. It can run its model using multiple GPUs without any hassle. TensorFlow also supports data parallelism, but you have to manually implement the functions.

PyTorch is generally used for research purposes. Many deep learning engineers do not prefer PyTorch for production-ready environments. TensorFlow is built around a development environment, and its model can be deployed on various platforms, ranging from cloud to mobile.

PyTorch is limited to Python, and it has relatively lesser job openings compared to TensorFlow. According to the Job openings platforms, PyTorch has an average of 500 job openings per region. TensorFlow is widely used for research as well as development purposes, which makes it more relevant for industry use. Also, it covers a wide domain of programming languages, so it promises more job opportunities.

PyTorch has well-written documentation. Although it is new to the deep learning community, it has become popular among Python developers because of its native support for Python. TensorFlow is an old and powerful deep learning library. Consequently, it has a huge community, and its availability in different programming languages makes it a more widely-used deep learning framework.

Both PyTorch and TensorFlow are powerful and widely-used deep learning frameworks. The winner of the PyTorch vs TensorFlow bout varies from situation to situation. Choosing among the two depends on your requirements. For a beginner, PyTorch would be a great choice, but if you want to learn an industry-standard framework, then go with TensorFlow. If you want to learn both ML libraries, you need to start with either one. Once you become comfortable with it, you can switch to the other. All the best! People are also reading: