What can you do with Python? 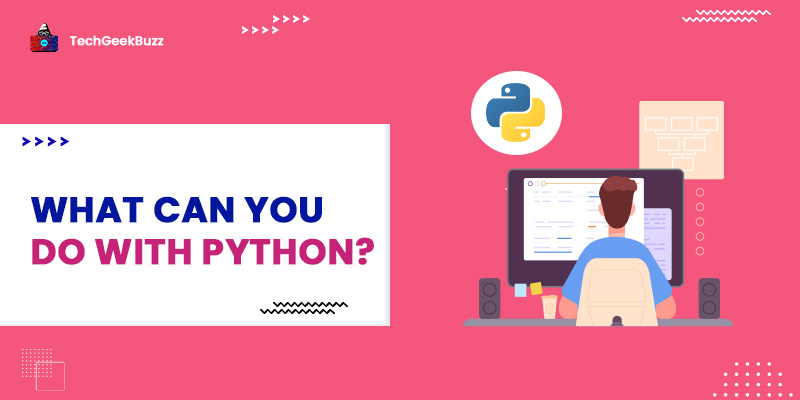 In this article, I will walk you through the different domains of Python, so you can have a brief idea about all the cool things you can do with the Python programming language .

Learning Python always starts with learning the basic syntax of Python and mastering its data types and data structure such as lists, strings, tuples, dictionaries, classes, etc. And,  once you are done with basic Python, then only you can go for the myriad domains provided by Python.

What You Can Do With Python?

From basic console app development to the web-development, Data Science, Machine Learning, Artificial Intelligence, and many more, you just name it Python will help you with that.

It all begins with taking input from the user and printing output on the plain black and white console. Although there are not many openings for such types of jobs where you will be paid for printing output on the console, in interviews, if you know how to put the best logic with basic Python programming, you can stand out from all the other candidates.

There are many developers who write the best logic and build powerful and beautiful applications only using basic Python and print the output on the console. And such skills are appreciated by many developers in the community, and it also gives a boost to the developer profile and resumes. Because it's all about writing logic for your application, and the best way to write the logical script is by building some console-based application.

There are many tutorials on the internet on Tkinter, turtle, and Python Qt that can teach you how to use these libraries. And you can also visit their official documentation, where you can get in-depth detail about every method and module used by these graphical libraries.

The Internet is all about sharing data and information, and all the pages and websites present on the internet share some kind of data. The data could be the price of the smartphone, recent news on a news portal, live match score on a website, active cases of a pandemic, etc.

Using web Scraping, we can use bots or program scripts to extract data from the website, and web scraping libraries like request, BeautifulSoup, and Scapy, make it easy for the developer to grab and use open data from the internet.

Scraping internet data is not completely legal there are many websites that do not support web scraping and put bot firewalls on their website. So when you send an HTTP request to a website using Python script, they simply block your request, considering you as a bot. To know how to access internet data using Python, click here .

After accessing data from the website, you can save that data into CSV, txt, or any other file format.

Writing back-end scripting is one of the major domains where it is widely used. It provides many web frameworks, such as Django, Flask , Pyramid, Bottle, etc., to write web applications. In Web Development, it is majorly used to write server-side scripting, where it handles requests, logic, and database of the web application.

However, for building the interface of the website, you still have to use front-end technologies like HTML, CSS, and JavaScript. This means Python web frameworks are not enough to make fully fledged web applications. You also need to depend on other programming languages .

Django is the most popular web framework. It is the 2nd highest stared framework on GitHub . And are many Jobs Openings with web development, so learning one of the Python frameworks would worth your time.

In Ethical Hacking, we penetrate our applications or program using a script to test the defense mechanism of the application. Many organizations hire a dedicated team of ethical hackers or penetrator testers to test their applications before they deploy them.

The main job of the ethical hacker is to test the application and identify the vulnerabilities before deployment, so the application can stand in the real world against normal users and malicious attacks.

It is a general programming language and is supported by all operating systems. Popular operating systems like macOS and Linux Distro comes with preinstalled Python, and because of its easy syntax, powerful testers libraries, and socket programming, developers like to write penetrator scripting using Python.

It also provides many hashing and encryption libraries that come in very handy when we write Python scripts to deal with user-sensitive credentials.

Here comes the big fish of the Python sea. Although Data Science, Data Visualization, and Machine Learning are all oceans in themselves, they all are interconnected.

What can you not do with Python?

Yes, It is extremely versatile, but it also has some limits. As an interpreted programming language, It is very slow some to C++, C, and Java, so it is not used to write programs or scripts for low-level devices.

It is also very close to human language, which makes it easy for a human to read, but at the same time, it becomes complex for machines to understand the language. So when it comes to designing device drivers and operating systems. It is not an ideal language.

In this article, I have mentioned the best applications of Python, where it is majorly used. Apart from the list, I have discussed above. It is used for many other purposes. When we say Python scripting, it includes everything from writing basic applications to designing complex Machine Learning models in Python.

No matter which Python domain you choose to set a career in, you also need to have some additional knowledge about that field. For example, if you chose web development, you also need to learn the front end as well as all the terminologies and workings of the internet and databases. The same goes for Machine Learning and Ethical Hacking.

There are a lot of use cases of Python in real life. Some of those use cases include web development, game development, artificial intelligence and machine learning, web scraping, enterprise applications, data analytics, data visualization, and software development.

No, Python is one of the easiest programming languages to learn. It has a simple and elegant syntax consisting of simple English keywords. Also, it eliminates the need for delimiters, like semicolons and curly braces. The only thing you need to take care of is indentation.

Yes, Python is among the highest-paying programming language. Many tech gaints ranked Python as one of the most in-demand languages. Also, a study has shown that more than 80% of developers across the globe use Python.